I Sell the Dead 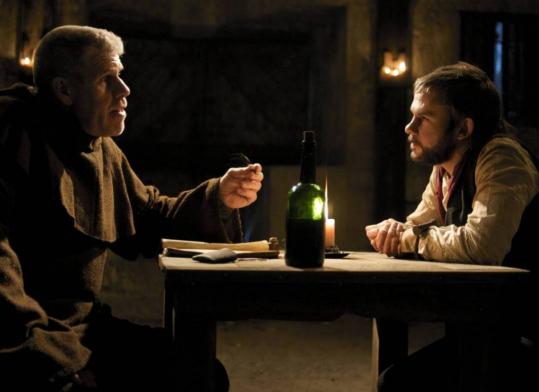 ‘I Sell the Dead’’ is a schlocky D-grade horror film made with deep love and fond reverence for the schlocky D-grade horror films that have come before it. The Hammer screamers of the ’60s, the Empire gore-fests of the ’80s - even a little of the EC horror comics of the ’50s finds its way into this project’s bloodstream. “Dead’’ is a sweet, splattery bit of in-jokery; if it’s not actually a good movie, on some level you have to admire the chutzpah of a film set in 1850s Ireland but shot on Staten Island.

Writer-director Glenn McQuaid has picked up a few slumming near-stars who know how to play this material: laughing along with it while keeping a straight face. Dominic Monaghan, a “Lord of the Rings’’ hobbit and star of “Lost,’’ plays Arthur Blake, apprentice to and eventual partner of the skilled grave robber Willie Grimes (Larry Fessenden, who seems to be channeling the “Shining’’-era Jack Nicholson here). The resurrectionist business is brisk, what with the local surgeon (Angus Scrimm) needing cadavers for his heinous experiments.

Since “I Sell the Dead’’ opens with Willie’s beheading by a historically inaccurate but perfectly functional guillotine, you know things won’t end well. The film is narrated as a flashback (including several flashbacks within flashbacks) by an imprisoned and condemned Arthur to a priest named Father Duffy, who’s played by Ron Perlman with an outrageously bad Oirish accent that would raise the late Barry Fitzgerald himself from the grave. Father Duffy has a dark secret. It’s that Perlman should know better.

Monaghan and Fessenden walk the line of grim-faced parody with more finesse and are much more fun to watch. Arthur and Willie get into the business of reclaiming zombies, vampires, and whatnot, and selling them to - well, it’s not clear who would want to buy a used zombie. The point is to entertain and connect the dots, from Roman Polanski’s 1967 “The Fearless Vampire Killers’’ to the “Phantasm’’ films in which Scrimm appeared to any number of candidates for SCTV’s “Monster Chiller Horror Theatre.’’

Ooohh, scary stuff, as that show’s Count Floyd used to say. Not really: The laughably unconvincing period details, sloppy supporting performances, and cheap rubber body parts keep “I Sell the Dead’’ firmly in the bargain bin. (Richard Lopez’s cinematography, by comparison, is shockingly professional.) There’s also the problem of making a mock-schlock version of drive-in fare that, like it or not, did take itself seriously. The smell that overtakes “Dead’’ by the final scenes is one of slightly smarmy self-indulgence. Still, the movie’s heart is in the right place - impaled on a stake and happily beating away.

Ty Burr can be reached at tburr@globe.com. For more on movies, go to www. boston.com/movienation.

I SELL THE DEAD

Unrated (as R: rubbery body parts, cheesy zombie makeup, one graphic throat-slitting, and a general disinclination to let the dead rest in peace)