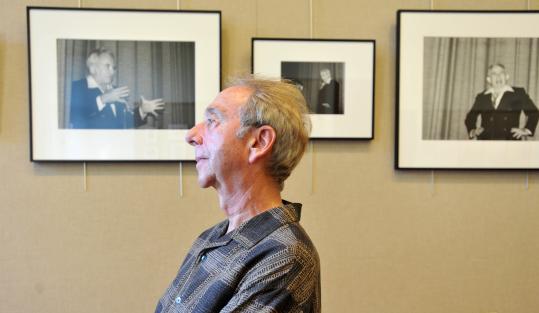 BROOKLINE - “Everyone’s a programmer,’’ Justin Freed says with a laugh, describing what it’s like to own a revival house. “When I was running that theater it was like being Theo Epstein [running the Red Sox]. Everyone has an opinion on what you should be doing - believe me! And I’m not sure I was doing it any better than the people who were giving me the suggestions.’’

Freed, 73, is sitting in Hunneman Hall, of the Brookline Public Library, the site of an exhibition of 42 of his photographs, “I Found It at the Coolidge.’’ The show runs through Sept. 28.

The “Coolidge’’ in question is, of course, the Coolidge Corner Theatre, in Brookline, which Freed owned from 1977 to 1989. Those were halcyon days. Moviegoers were as likely to encounter Norman Mailer introducing one of his films, or the graffiti artists of “Wild Style’’ spray-painting an exterior wall, as a Fellini double feature.

Now run by the nonprofit Coolidge Corner Theatre Foundation, the theater continues its year-long celebration of the 75th anniversary of its founding. Freed joins author Susan Quinn in a multimedia event there Thursday to mark the publication of Quinn’s handsome commemorative booklet, “Only at the Coolidge: The Story of a Remarkable Movie Theater.’’

The Brookline Public Library exhibit, which consists of photographs Freed took over the years at the Coolidge and the Telluride Film Festival, is part of the celebration, too. Related Coolidge memorabilia are also on display: screening schedules, T-shirts, and the like.

The sight of one of the schedules in the library lobby has attracted the attention of Clement Liu, a Brighton-based photographer. Walking into the otherwise-empty hall, he apologizes to Freed for interrupting, even as he starts to grin looking at the images on the wall. Once Liu hears who it is sitting there, the grin widens further. “I love foreign movies and revivals and all that,’’ Liu says. “I’m a movie fan and I really loved the old Coolidge.’’ Now it’s Freed who’s grinning.

Freed has kept busy in his post-Coolidge life. He does volunteer work counseling prisoners and the elderly. Various photography projects are ongoing, he says, as well as a video documentary on local artist Jen Bradley.

There was a 25-year period when Freed dominated sophisticated filmgoing in and around Boston. A Boston native, he spent eight years getting his undergraduate degree, starting at Harvard, ending at Brandeis. “I’m not very academically oriented,’’ Freed says with equal parts pride and chagrin. He went to work for Dun & Bradstreet, though what he really wanted to be was a clinical psychologist. “I was 30, I had two children,’’ Freed recalls, “and I was sort of fumbling around. I didn’t want to spend six years in grad school. So what do I really love? I love movies.’’

Freed started working as programmer and manager for the Kenmore Square Cinema in 1965. He was co-programmer at the Orson Welles Cinema, in Cambridge, from 1969 to 1972. Then he bought the Park Square Cinema, in 1972, and the Kenmore two years later. It was Freed who brought the midnight movie to Boston and began scheduling what would become such revival-house standbys as “Bringing Up Baby’’ and the Astaire-Rogers pictures.

Forced by the vagaries of moviegoing taste and real estate values to close the Kenmore and Park Square, Freed moved on to the Coolidge. He turned the balcony into a second theater and switched the programming from second-run features to revivals and the occasional non-Hollywood first run. (Dennis Hopper showed up for the US premiere of his “Out of the Blue.’’)

“The thing that I tried to do,’’ Freed says, “was to provide as wide a range as possible, both in terms of various national cinemas and historically. So we did documentaries. We did a lot of innovative animation. We did retrospectives of directors. We did genres. We did Soviet cinema. We did a lot of Japanese cinema. I tend to love the obscure movies that rarely get played.’’

Asked for some favorite titles, Freed rolls his eyes at the impossibility of the task but agrees to make an effort. He names an early Kurosawa, “Stray Dog’’; the noir classic “Out of the Past’’; Andrei Tarkovsky’s “My Name Is Ivan’’; an early Jimmy Cagney picture, “Jimmy the Gent’’ (“It’s about 60 minutes of sheer kinetic force, with a raw, exciting Cagney’’); Ettore Scola’s “We All Loved Each Other So Much’’; and, casting aside obscurity, “Singin’ in the Rain.’’

At the top of any list, Freed says, has to be Buster Keaton. “I love Chaplin. I love Laurel and Hardy, Harold Lloyd. But for me Keaton is the most American. He’s the Louis Armstrong of our cinema. The purity, the poetry, the inventiveness: It’s comparable to jazz. Keaton is my man. He goes right to the heart.’’

What did in the revival house was home video. Asked if he watches DVDs, Freed says that he does, sounding a bit mournful. “It’s not as good. I hate when I miss a film then I see it on DVD and think, ‘Oh man, I needed to see this on the big screen. I’m cheating myself.’ So I try to be better about that.’’

The Coolidge was an all-consuming passion. How consuming? “My daughter was married at the Coolidge,’’ Freed says. “So, yeah, there’s a lot of glue there.’’ The glue came unstuck in 1988. Unable to make the theater work financially, Freed agreed to sell the property to a developer. This set off a series of financial cliffhangers, which Quinn details in her booklet, that finally led to formation of the foundation and its taking over the theater in November 1989.

Freed admits he found it hard to adjust to giving up the Coolidge. “My office was in the upstairs of this 1933 movie theater. So when you walk into a place like that, there are all these tremors from the past: movie tremors, social tremors. . . . Not too far above is one projection booth, and not too far below the other. They’re projecting these dreams, these narratives, on the screen, and here I am in the cockpit. Something happens to your psyche.’’ Freed smiles.

“It wasn’t always a walk in the park, because the industry is a contentious one. You know, dealing with distributors, trying to get good prints, trying to get people to keep their promises that they’ll make a new print for you or actually keep a commitment. It’s a little bit of an anarchic industry, or it was. So there was a lot of heartache. There’s a lot of turmoil, a lot of haggling, a lot of drama - not just the kind on the screen! But the thing is - and this is relevant to my story - I felt and feel very proud of what I did. This is my legacy to the community. . . .

“I have really found that out. When I started on this project, it was very meekly. I was very tentative. Who am I? I’m looking for a film lab. ‘I have this stuff from the Coolidge.’ ‘The Coolidge!’ As soon as I mentioned the Coolidge - ‘Oh, you did that!’ - it was like a letter of introduction that I did not know that I had. It was so heartening for me. I’m not completely forgotten.’’

“I will be! But for the moment I’m having my 15 minutes. It is so really, really gratifying to me that people remember what we did at that time. So it has some resonance in the community. That’s all I care about. That’s really nice. You don’t know when you’re doing it you might be doing something that might have some use to the world - other than selling popcorn.

“By the way, Julia Child came and said we had the best popcorn in Boston.’’