An informer caught between British security and the IRA 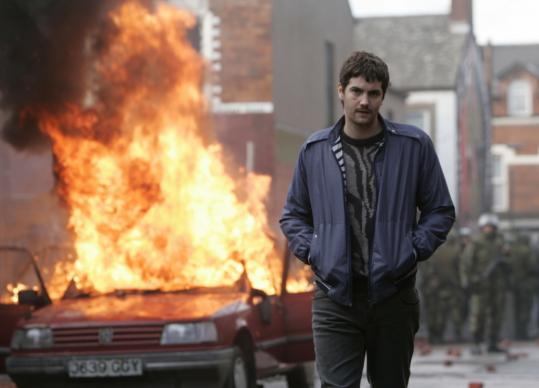 ‘Fifty Dead Men Walking’’ provides another example of what happens when mediocre moviemaking meets an interesting life. In the late 1980s Martin McGartland was an Irish punk who ran with punks who had IRA connections. Rather than throw him in jail for any one of his petty crimes, British security forces roped him into informing on IRA activities. His participation prevented numerous bombings and is considered an act of heroism by many, including McGartland himself. He co-wrote the book that gives the movie its title, a reference to the number of men whose lives he says he saved. He fled the IRA in 1991, when he was 21, and has been in hiding ever since.

The compelling movie would be about the vise this proposition put McGartland in - a study of character either under pressure or above it. And for that you need a smart script, a perceptive director, and a good actor, none of which is here. Written and directed by Kari Skogland and starring Jim Sturgess as McGartland, “Fifty Dead Men Walking’’ divides its time between being a thriller and melodrama. It shows us how McGartland’s relationship with the IRA and British security, represented here by Ben Kingsley, turns his marriage into such a soap opera. His wife (Natalie Press) was sweet during the courtship, but being a wife and mother with a man who could die at any moment is not what she wants. And she only knows about half of his double life.

This is like “The Departed’’ for people who prefer their Martin Scorsese films to look like old-school made-for-television movies that rely on a lot of flattening shortcuts. Casting Sturgess is one such shortcut. Sturgess seems the right age (most of the movie is set between 1988 and 1991). But he lacks the kind of gravity he would need to upend the reality that he looks like the guitarist in every blogged-about UK band to wash up on American shores in the last 10 years. Accordingly, he was more in his element in “Across the Universe,’’ Julie Taymor’s Beatles fantasia from a couple of years ago. The stress of the situation seems lost on him.

The movie is full of dockside and pool hall meetings with Kingsley, outfitted in a wig that brings him closer than ever to Ben Gazzara. There’s a riot with British troops, a grisly barroom shootout, a loud, never-ending thriller score, and the occasional banal exclamation. “If this thing blows up, I’ll be Jesse James,’’ says McGartland’s hothead best friend (Kevin Zegers). Skogland, a television veteran, gives us mechanical, suspenseless violence and cute boy-meets-girl scenes. But the quiet, reflective moments don’t seem to interest her. A richer movie might speculate on McGartland’s life now. How does a local hero survive in an anonymous void?

FIFTY DEAD MEN WALKING Written and directed by: Kari Skogland, adapted from the book by Martin McGartland and Nicholas Davies

At: Kendall Square and West Newton

Rated: R (brutal violence and torture, language and some sexuality)