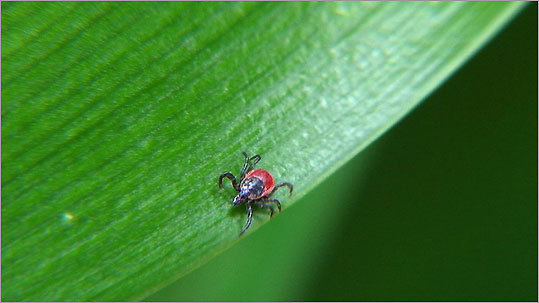 Heartbreaking stories of patients suffering life-shattering illness make “Under Our Skin’’ compelling. It would have been an even better movie if the filmmakers had been more diligent in following the money.

The topic at hand is Lyme disease, named for the Connecticut town where the tick-borne illness was first identified. Most people believe that Lyme now can be treated with a short-term course of antibiotics.

“Under Our Skin’’ says that’s not so. The film argues that Lyme is much more widespread than previously thought, primarily because the disease is often misdiagnosed. It focuses on patients with a chronic form of the illness, including debilitating pain and neurological symptoms that can last for years, perhaps for life.

Much of the medical community says chronic Lyme simply doesn’t exist - blaming other ailments and, often, psychological disorders. The Infectious Diseases Society of America panel responsible for setting treatment protocols is among the naysayers.

The movie makes a convincing case for the existence of chronic Lyme, following several patients through the ordeal of illness and treatment over a period of years, including a beautiful young bride reduced to twitching invalid. Most of these patients recover to some degree with the help of a handful of doctor/saviors offering aggressive and expensive long-term antibiotic treatment.

The second half of the film focuses on what looks like a medical industry witch hunt against these docs, as they are called before state medical boards for providing unapproved treatment, at risk of their license to practice. Members of the Infectious Diseases Society panel testify against them.

The film asserts that the doctors on the panel have been corrupted by pharmaceutical and insurance industry money. The Connecticut attorney general is investigating. But for all the time spent on patients’ pain, “Under Our Skin’’ devotes little to making a factual case against the panel.

Panel doctors are shown in interview segments dismissing chronic Lyme as nonexistent - making them look absolutely villainous in the context of the patients’ suffering. But the filmmakers never confront them on camera about their commercial ties or examine those ties in detail, even though the panel’s corruption is a central thesis of the film. That’s when “Under Our Skin’’ seems too much like advocacy and not enough like journalism.

At: Museum of Fine Arts tonight and various dates through next Thursday