Meryl Streep, Julia Child: the word from connoisseurs on how The Star channels Our Chef 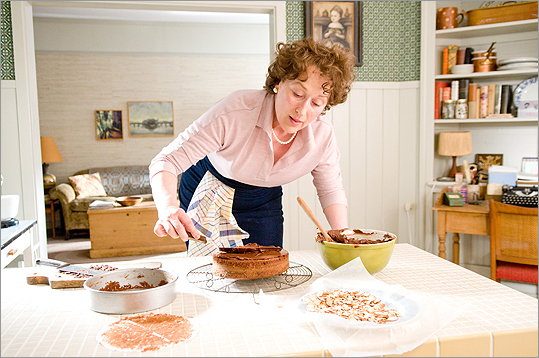 Meryl Streep - world’s most celebrated actress, Oscar magnet, and high priestess of difficult accents - knows she’s just a well-paid voice in the crowd when it comes to taking on Julia Child.

“There are certain indelible voices, people can imitate them really easy,’’ says the 60-year-old New Jersey-born actress, who remembers coming of age when Child’s “The French Chef’’ was all the rage on public television. “She’s one that everybody thinks they can do.’’

We can’t, though. Not really. At least not in the richly layered way that La Streep does Madame Child in Nora Ephron’s butterlicious movie, “Julie & Julia,’’ opening Friday.

Child may have been the Elvis of cooking, an irresistible voice and presence so broadly accessible that her mimics are legion. Her most famous impersonator is still Dan Aykroyd in drag, but her essence was something far less theatrical.

Close friends of the culinary trailblazer describe her as human and superhuman all at the same time; a unique emulsification of high standards and nonchalance, rigorous work ethic and boundless joie de vivre. Which is why, after attending a recent preview screening in Boston, two local chefs - both frequent guests in Child’s famous Cambridge kitchen before it became a Smithsonian attraction - were most impressed that Streep gets the complex balance of their beloved mentor exactly right.

“Julia was quirky, just the way Meryl Streep portrays her,’’ says Lydia Shire, who might not be running kitchens at Locke-Ober and Scampo today if Child had not trumpeted her talents when Shire was working her way up at Maison Robert in the early 1970s. “She was tall [which the 5-foot-6 actress achieves via wardrobe and filmmaking tricks], kind of clunky at times, not what you would call a fluid beauty. Meryl has her mannerisms down . . . and her generous spirit. Julia loved to bring people together. She did not have an ego.’’

For chef Gordon Hamersley, Streep’s portrait hit home with its authentic nuances, including the comfortably regal way the actress sits, tilts her head just so, rests a hand on one hip, and sometimes closes her eyes and draws a breath before embarking on the swoops and whooshes of her character’s familiar falsetto. He says he entered the screening prepared to hate the performance - “kind of like watching somebody play your grandmother,’’ he explains - but came away with newfound respect for the same Hollywood he blames for mangling so many Boston accents in his movie-going life.

“Even when Meryl Streep was not perfect, it didn’t seem to matter to me; she kind of became Julia for me about halfway through the film,’’ marvels Hamersley, who first met Child in about 1980 while cutting his teeth at Ma Maison in Los Angeles, then later followed her prescient advice to open Hamersley’s Bistro in Boston’s South End. “Julia was just completely down to earth. She had a tremendous love of the food and I think Meryl really captured that.’’

Written and directed by the woman who brought us “Sleepless in Seattle’’ and “You’ve Got Mail’’ (and also “Bewitched,’’ but we forgive her), Ephron’s “Julie & Julia’’ is actually two movies in one. Streep’s half is a feel-good biopic based on “My Life in France,’’ Child’s 2006 memoir written with Alex Prud’homme, which looks back on her years as a middle-aged Le Cordon Bleu student and food pioneer in the making. Its contemporary parallel is a feel-good romantic comedy (Ephron’s specialty at least since “When Harry Met Sally’’) starring Amy Adams as Julie Powell, disenchanted government drone and accidental author of “Julie & Julia,’’ the bestselling chronicle of the wacky year she cooked and blogged her way through 524 recipes from “Mastering the Art of French Cooking,’’ Child’s seminal cookbook co-written with Simone Beck and Louisette Bertholle.

Powell, a much saltier character in print, has described Ephron’s PG-13 version of her life as rather “twinkly,’’ but that hardly matters. Only Powell’s “bleaders’’ (blog readers) and “flimsies’’ (Child’s disdainful term for non-serious cooks) will debate the weight and accuracy of her half of the movie, perhaps over their hilariously imperfect Oeufs à la Bourguignonne (eggs poached in red wine).

All other eyes will be on Streep and her treatment of a cultural icon born in Pasadena, reborn in Paris, and adopted with pride by Greater Boston.

The movie star donned a curly brown wig and gained 15 pounds for the role. She also did her homework, paying particular attention to Child’s earliest and least-polished television appearances, but she claims to have made no conscious acting choices as a result. “Usually I do these things like a 4-year-old,’’ she insists. “When you come upon your child and she’s pretending to be mommy, she’s not parsing it and taking it apart and thinking of all the component parts; she just is that. She doesn’t question who she’s being at that moment.’’

In fact, Streep admits she drew inspiration for this big-screen Child from her own late mother (“she was really fun to be with’’) as well as several other “sizable women’’ in her life, including her former publicist, Plum Island resident Lois Smith, who remains a formidable force of nature at 81.

“I think why I had so much affection for Julia Child, and Lois, is because they remind me of my mother,’’ Streep reasons.

How serendipitous, then, that Ephron happened to mention the “Julie & Julia’’ screenplay percolating in her brain when she bumped into the actress a few summers ago, and how logical that Streep’s on-the-spot imitation of America’s fabled French Chef effectively ended the casting search before it began. The filmmaker, who has her own well-documented personal reference points when it comes to food in general and Child’s food in particular, views her latest movie as nothing short of destiny. What better way to follow heartfelt columns and essays about Krispy Kreme doughnuts, prophylactic chicken soup, and needlessly roaming restaurant pepper mills?

“I felt like my entire life was feeding into this movie,’’ Ephron says, pointing out that she directed her first movie at nearly 50 years old, roughly the same age Child was when her first book was published. “It’s food, it’s romance, it’s writing, it’s marriage, . . . it’s about being able to change who you are.’’

What it’s not, however, is a Food Movie.

For viewers who come to salivate, there’s a perfectly sauced and boned sole meunièr, the fantastically buttery dish that first seduced Child in France and that Ephron now considers the single greatest achievement of her filmmaking career. (“Other people would be proud of eight minutes of steadicam shots; I am not that director,’’ she quips.) But Ephron’s latest is not a film that lingers long over luscious ingredients and skillful preparations, the way the camera does in “Eat Drink Man Woman’’ or “Big Night.’’ In fact, during one Cordon Bleu master class, Streep’s character appears to hack off the root end of an onion first - a basic kitchen no-no that might reasonably have gotten her expelled, if not stabbed.

“Julie & Julia’’ gets away with a lot because it’s arguably told from Powell’s naive, idealized point of view. So we can blame the young blogger if we think Child’s exuberant warble is a little too one-note, or if her lovey-dovey onscreen marriage to diplomat Paul Child (Stanley Tucci) sometimes seems too good to be true, especially when it runs up against the dark days of McCarthyism.

In the end, friends and fans of the couple probably won’t mind that Ephron has made another Happy Meal of a movie. Even the great Julia Child had a weakness for McDonald’s french fries.