The delicate revelation of a wartime secret 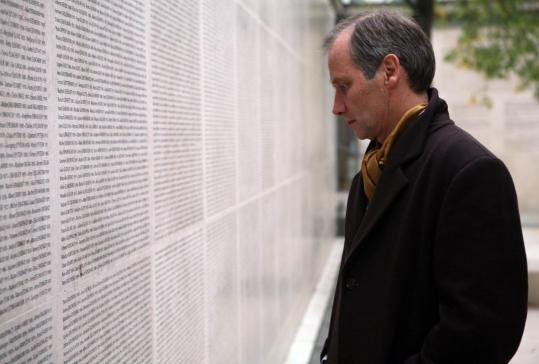 Hippolyte Girardot plays a man who has questions his mother would rather not answer. (Kino International)
By Wesley Morris Globe Staff / July 24, 2009

Reticence is unusual for films about Vichy France, the Nazi occupation, and the Holocaust. Disclosure, denial, suppression, resistance, we’ve seen. But the discretion bound up in reticence is also a powerful thing, implying what a survivor of sorts can’t bring herself to articulate.

In Amos Gitai’s “One Day You’ll Understand,’’ Victor Bastien (Hippolyte Girardot), a successful businessman, discovers a trove of wartime documents and letters that includes an Aryan declaration by his late father that identifies his mother, Rivka (Jeanne Moreau), as a Jew. This is news to him. He and his sister, Tania (Dominique Blanc), were raised as Catholics. When Victor tries to find out more over dinner, she demurs, leaving the table for salt, going on about an antiques sale, telling Victor that he sounds hoarse. She heard Victor’s question. She just doesn’t want to discuss it.

Gitai, who is based in Israel and France, works here from Jérôme Clément’s 2005 book about his mother. He whips something rich and delicate out of the story’s dramatic spareness. Why Rivka chooses not to talk about what happened during the occupation isn’t as significant as whom she chooses to speak to. The film is set in 1987 during the Klaus Barbie trial, which plays on television but appears to be emanating from Rivka’s mind. Barbie was the Gestapo war criminal who oversaw the murder of thousands of people in Lyon. Young Rivka obviously escaped, but at a price this movie makes gradually evident. Her reticence has its reasons.

Over the years Victor’s haute-bourgeois mother became a sort of interfaith, interclass internationalist. The most unexpected collection of people turn up for a gathering in her honor: her beautician, her pharmacist, her swami. (The film would go nicely on a bill with “Summer Hours,’’ Olivier Assayas’s film about a family dividing its matriarch’s estate.) Victor decides to get to the bottom of his family for himself, taking his wife (Emmanuelle Devos) to the village and home where Rivka’s doomed Russian parents, the Gorniks, hid during the war. Suddenly, his mother’s closed mouth and open mind make touching sense.

These scenes are handsomely done. Victor runs his hand along the wallpaper - much the way he did early in the film at a Holocaust memorial - and suddenly the house is alive with the memories of the family that lived there. A flurry of scenes ends with the descent of the Nazis and the odd, disturbing sound of their boots trudging over rocks. The walls are talking and, eventually, so is Rivka - but to her grandchildren instead of her own son and daughter. Moreau says little. It’s her face, a lined and ruched version of its sexy, excitable New Wave self, that says everything. The film delves briefly into the French government’s attempt to compensate family members of Vichy victims. But standing between her son’s two children, Rivka gives them a stunning, far more valuable gift: their Jewishness.

Adapted by: Gitai and Marie José Sanselme from the book by Jérôme Clément