A satire of war, politics that’s a bloody riot 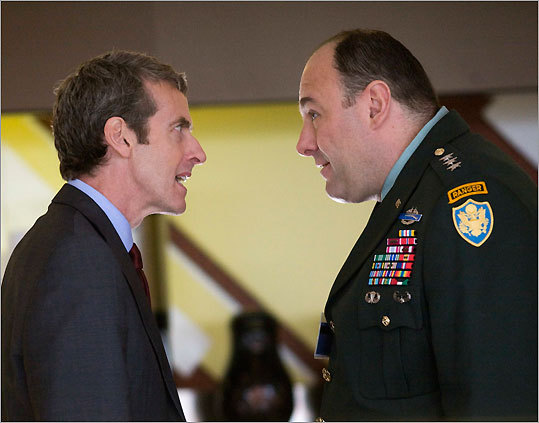 Leave it to the British to raise invective to a high art. As a ranking cabinet minister in the brutally funny political satire “In the Loop,’’ actor Peter Capaldi unfurls dazzling verbal ribbons of the foulest language imaginable, thunderbolts of vulgarity that carry the force of precision carpet-bombing.

“Where do you think you are, some [expletive] regency costume drama?,’’ his Malcolm Tucker assails one character in one of his calmer, more printable outbursts. “This is a government department, not some [expletive] Jane [expletive] Austen novel!’’

It’s hard to believe that Capaldi, once the sad-eyed innocent of “Local Hero’’ (1983), is now the wizened, cankerous face of the British political system, but that’s what modern times will do to a man. “In the Loop’’ is that rare film utterly without heroes; instead, it amasses a group of boobs, users, and charlatans on both sides of the Atlantic and asks us to recognize our duly elected and appointed officials. You’ll laugh until you bleed, or vice versa.

A number of cabinet members want a war, as do some of their American counterparts. Other officials want to stop that war, as do some of their American counterparts. War with whom? It’s never specified. Someplace in the Middle East; anything else is on a need-to-know basis. As it zigzags from London to Washington, D.C., and back again, “In the Loop’’ assumes that armed conflict entered into by the Western powers is merely grandstanding business as usual. The motor driving the action isn’t international corporate conspiracy but rather individual greed and ambition. The movie imagines the world of “Dr. Strangelove’’ without ideology: Every man, woman, senator, and underling is out for his or her piece of turf.

In such a world, speaking one’s conscience is the mark of a fool, and so we have Tom Hollander, the fop villain from the “Pirates of the Caribbean’’ series, as Simon Foster, minister of milquetoast, going on a radio show and blandly announcing that “war is unforeseeable.’’ This instantly makes him a hero to the government doves and a loose cannon to the hawks; Simon, with the cowardice of the genuinely nice, spends the rest of the movie trying to simultaneously confirm and retract his initial statement. The upshot, as any follower of public oratory will relish, is total gibberish.

Padding about after a large, milling group of characters, “In the Loop’’ plays like a Robert Altman film with added measures of delight and disgust. On the US side are a State Department warmonger played with juicy egotism by David Rasche, a tweedy antiwar diplomat (Mimi Kennedy), and a five-star general played by none other than James Gandolfini - Tony Soprano as a gentle warrior peacenik. The movie’s delirious high point is a scene in which he and the diplomat share a strategy huddle in a bedroom during a D.C. houseparty, totting up troop numbers on a child’s talking calculator. No matter how grown-up the characters act, the movie drags them back to the sandbox.

Some of the other subplots are more of “The Office’’ variety - petty infidelities and humiliating misunderstandings. A young British press adviser (Chris Addison) tries to game his American opposite (Anna Chlumsky) in the diplomat’s office, with results that lead to casual sex and maximum chagrin. The indispensable Steve Coogan turns up as one of Simon’s constituents back in the home district, complaining about a collapsing stone wall with the fervor of Mr. Gumby in an old Monty Python sketch. No one gets away with anything, except those who shout the loudest or eviscerate the most colorfully.

The first-time director is Armando Iannucci, who with Capaldi and co-writers Jesse Armstrong, Simon Blackwell, and Ian Martin formed the creative nucleus of the 2005-’07 BBC comedy series “The Thick of It,’’ on which the character of Malcolm Tucker debuted. Like the show, “In the Loop’’ considers politics an arena of bloodsport which only moviegoers who read the papers, have strong stomachs, and expect the absolute worst of humanity will find funny. Shot in early 2008, it’s a reaction to the Bush/Blair era and is thus already dated in many respects. Venom this cleanly expressed, on the other hand, never goes out of style.

Photos The Sopranos: Where are they now?

IN THE LOOP Directed by: Armando Iannucci