The case of Sherlock Holmes 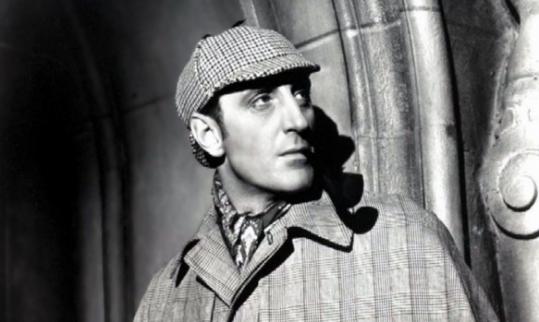 Arthur Conan Doyle’s character wasn’t the first in his line of work, either. The detective story begins with Poe’s C. Auguste Dupin. Really, though, isn’t it a case of there being Sherlock Holmes - and then every other detective? He’s the most famous fictional character in history, and the movies have loved him almost as much as readers have. Abundant evidence of Hollywood’s affection can be found at the Harvard Film Archive next weekend. “Sherlock Holmes and Friends’’ consists of six Holmes films. Three feature Basil Rathbone: “The Hound of the Baskervilles,’’ “The Scarlet Claw,’’ and “The House of Fear.’’ Peter Cushing plays Holmes in a later “Hound of the Baskervilles.’’ “The Seven-Per-Cent Solution,’’ based on Nicholas Meyer’s best-selling spoof, stars Nicol Williamson. In “They Might Be Giants,’’ George C. Scott is a mental patient in modern-day New York who thinks he’s Holmes - and Joanne Woodward is Dr. (Mildred) Watson, his psychiatrist as well as sidekick.

The series also includes the 1925 silent “The Lost World,’’ based on Conan Doyle’s adventure novel of that name. It screens Aug. 2 with live piano accompaniment.

The distance from Iron Man to Holmes isn’t necessarily that great - the all-knowing detective being the superhero of his day. Holmes doesn’t lead la vida loca as Tony Stark does. There is, however, the matter of his fondness for a certain product of the coca plant. Holmes wears a costume: inside, the dressing gown; outside, the deerstalker cap - and, yes, cape. He even has his version of the Batcave or Fortress of Solitude, 221b Baker Street, and, of course, special appurtenances (the pipe, the violin).

Holmes is usually seen as the echt-private eye: the progenitor (at however far a remove) of Hercule Poirot, Sam Spade, Philip Marlowe, J.J. Gittes, and the rest. That’s true, no question. But his influence extends well beyond that. What’s Mr. Spock, but Holmes sent into space with pointy ears? There’s the same stunning intellect - and stunning lack of emotion.

The pairing of Holmes and Watson has been even more influential. There’s a long hero-sidekick tradition, of course: Lear and his Fool, Quixote and Sancho Panza, Don Giovanni and Leporello. Holmes and Watson derive from a real-life duo, Dr. Johnson and Boswell - and lest we forget, Watson, for all his obtuseness, does function as Holmes’s Boswell. He’s the writer as well as the stooge.

Watson also provides the stories with their faint touch of comedy. He’s the classic straight man, except that the punch lines he sets up come in the form of solutions from the top banana rather than gags. Conan Doyle’s influence on comedy, however unintended, may well be greater than that on detective fiction. The Holmes-Watson dynamic would live on in Abbott and Costello, Bing Crosby and Bob Hope, Johnny Carson and Ed McMahon - and never more so than when Johnny donned his turban as Carnac, a character no less infallible than Holmes.

A character as distinctive as Holmes, let alone as solemn, presents a big comic target. Mack Sennett played him in several silent comedy shorts. Gene Wilder directed and starred in “The Adventures of Sherlock Holmes’s Smarter Brother.’’ In “Without a Clue,’’ it’s Ben Kingsley’s Watson who’s the real brains of the operation.

Usually, though, Holmes has been played straight. Why mess with such a good thing, audience-wise? That said, there have been a futuristic cartoon (“Sherlock Holmes in the 22nd Century’’), an encounter with the avant-garde (“The Case of Marcel Duchamp’’), and a special-effects-fest aimed at the youth market which Steven Spielberg executive produced (“Young Sherlock Holmes’’). Holmes has also appeared in Russian, Czech, Italian, French, German, and Chinese incarnations.

Holmes as a character is so canonical as to be, for all intents and purposes, his own auteur. Perhaps it’s no coincidence that the one major filmmaker to take on Conan Doyle’s creation failed pretty ignominiously. Although revisionist claims have been made for Billy Wilder’s “The Private Life of Sherlock Holmes’’ (1970), a deerstalker “Double Indemnity’’ it’s not.

Actually, another auteur has tackled Holmes, albeit in a less conventional manner. Hayao Miyazaki, the master of contemporary animation, directed six episodes of a Japanese cartoon series from the mid-’80s, “Meitantei Holmes.’’

Dr. Watsons have been no less varied. Among them have been Michael Hordern, John Mills, Donald O’Connor(!), and Robert Duvall. Dudley Moore played Watson to Peter Cook’s Holmes in a 1978 version of “Hound of the Baskervilles’’ (at least 20 have been filmed). Alas, neither of Cook and Moore’s “Beyond the Fringe’’ mates, Alan Bennett and Jonathan Miller, figure in the cast.

The two actors most commonly associated with Holmes are Brett, thanks to multiple British television films that ran on PBS in the ’80s and ’90s, and Rathbone. For anyone who watched Rathbone when his performances came out, between 1939 and 1946, or later as television reruns (they were a UHF staple back in the late ’60s), he remains the Holmes by which all others are measured - and found wanting.

Rathbone played the role in 14 movies. “Immaculately right’’ for the part, Pauline Kael called him. Previously, he had tended to play villains: Pontius Pilate; Mr. Murdstone, in “David Copperfield’’; Richard III; most deliciously, Sir Guy of Gisbourne, crossing swords (literally) with Errol Flynn in “The Adventures of Robin Hood.’’

That history of suave villainy imparts an extra savor to Rathbone’s Holmes. It’s more than just the actor’s scimitar profile and brandy-and-cigars voice that make him such an ideal Holmes. It’s this undertow of moral division. Rathbone’s Holmes comes across as being nicer than Conan Doyle’s - he’s friendlier, more solicitous, more human - but he’s also darker. This Holmes can plausibly be imagined as his own Moriarty. He’s a reminder of that other late-Victorian creation who continues to flourish as a popular archetype: Dr. Jekyll and Mr. Hyde.

The Rathbone movies enjoy a further advantage. They’re in black and white. (Part of what makes the Peter Cushing “Baskervilles’’ such a chore to watch is the luridness of the Technicolor.) So even when Holmes is updated to chase Nazi spies, as he is, he manages somehow to seem period. Visually, the Rathbone films are a link between ’30s horror and ’40s noir. More than that, they’re a link between Holmes’s literary past and an eternal present. The mists and shadows of World War II Washington don’t look all that different from the mists and shadows of late-Victorian London. They are, in effect, constant - or as constant as a fictional character like Holmes can be. Small wonder, then, that when an awestruck policeman comes upon Scott’s Holmes-costumed character in “They Might Be Giants’’ he blurts out, “Mr. Rathbone, it’s an honor.’’

Correction: Because of a reporting error, the surname of Edgar Allan Poe’s character C. Auguste Dupin in a story in last Sunday’s Movies section was misspelled.

Correction: Because of an editing error, the caption of the photo showing Sherlock Holmes with a walking stick on the July 19 Movies section front incorrectly identified the movie. The movie was “The Hound of the Baskervilles.’’