Making the most of the studio system 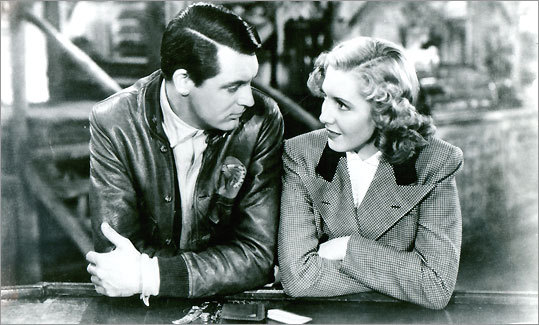 It’s an article of faith that 1939 was the pinnacle of American movies and it has all been downhill ever since. To say otherwise is, in certain circles, to risk having your Criterion DVDs revoked and be sentenced to eternally wander the multiplex in sackcloth and ashes. The glow of that annus mirabilis extends into the future: The Academy of Motion Picture Arts and Sciences’ recent decision to increase the Best Picture category from five nominees to 10 arose during plans for this year’s 70th anniversary celebration of 1939, when a similar number were honored.

Is it true? Was the greatest year in the history of cinema seven decades in the past? Actually, yes, but let’s play devil’s advocate for a moment. Why 1939? Why not, say, 1946, a year that saw the highest movie attendance on record and films like “The Best Years of Our Lives,’’ “My Darling Clementine,’’ Hitchcock’s “Notorious,’’ Capra’s “It’s a Wonderful Life,’’ Bogart in “The Big Sleep,’’ a wave of film noirs like “The Killers’’ and the arrival on US shores of such post-WWII foreign classics as “La Belle et la Bête’’ and “Rome, Open City’’?

Yet 1939 trumps them all, and only partly on the extraordinary quality of the movies themselves. Rather, the year marked the peak of the Hollywood studio system - a factory in the paradoxical business of mass-producing individual dreams. The previous year saw an antitrust case brought against the major film companies by the US Department of Justice, but it wouldn’t be until 1948 that the Supreme Court would order the studios to divest themselves of their theaters. In 1939, the system was a vertically-integrated money machine, controlled from one end to the other by five companies: Loews/MGM, Warner Bros., Paramount, RKO, and Twentieth Century Fox.

On the production end, all the cogs were in place for streamlined assembly: writers in their bungalows, actors held to seven-year contracts, hair and makeup departments that processed actors like cheese. The keys were quality control and constant production - 761 films were released in 1939, just off the all-time peak of 778 two years earlier - and the difference was that the men who made the movies in many cases loved what they did. (Also, the scripts were written by novelists, playwrights, and other grown-ups.)

Those men worked their employees hard. Bette Davis starred in four movies in 1939: “Dark Victory,’’ “Juarez,’’ “The Old Maid,’’ and “The Private Lives of Elizabeth and Essex.’’ Character actor Thomas Mitchell starred in five and won a supporting actor Oscar for his drunken doctor in “Stagecoach.’’

His other four roles were in “Only Angels Have Wings,’’ “The Hunchback of Notre Dame,’’ “Mr. Smith Goes to Washington,’’ and a little thing called “Gone With the Wind,’’ in which he played Scarlett O’Hara’s father. Mitchell batted 5-for-5 that year, but the movies tailored the roles to his skill set and supported him with talent on all sides.

“Gone With the Wind’’ was the biggest movie of the year and, adjusted for inflation, it’s still the biggest moneymaker of all time. Of all that year’s big releases, though, it has aged the most problematically. The racial politics were dated at the time and are more so now; the celebration of marital rape is impossible to get around in the 21st century. It remains a very good epic melodrama, but it was as a pop explosion that “GWTW’’ achieved greatness, and the author of that explosion wasn’t novelist Margaret Mitchell nor directors (in order) George Cukor, Victor Fleming, William Cameron Menzies, and Sam Wood, but producer David O. Selznick. The head of the factory, in other words. That tells you something about 1939.

What else was released that year? Stand and behold: “Stagecoach,’’ the film that brought the western back from the dead and made stars of John Wayne and Monument Valley. “Mr. Smith Goes to Washington,’’ in which Frank Capra’s iron-plated idealism found Jimmy Stewart, the actor to make it work. “The Wizard of Oz,’’ a problematic MGM “big show’’ and a film one critic likened to “a pound of fruitcake soaking wet’’ but destined to serve as a primal TV narrative for future baby boomers.

And more: “Wuthering Heights,’’ maverick producer Samuel Goldwyn’s bet that moviegoers would go for Bronte if you cast beauties like Laurence Olivier and Merle Oberon and hired Gregg Toland to shoot it. The all-female, all-star “The Women,’’ which puts the 2008 remake to shame. “Destry Rides Again,’’ a comic western which has great fun with the idea of Stewart as a Wild West lawman and which saved Marlene Dietrich’s career from the dead. “Ninotchka’’ - Garbo laughs.

And more: “Gunga Din,’’ delightful, suspenseful action-adventure and insanely incorrect politics by today’s standard. “Dark Victory,’’ in which Davis plays a selfish heiress ennobled by a tumor and dares you not to be moved to tears. “Goodbye Mr. Chips’’ - irresistible corn about the teacher you wish you’d had, with Robert Donat pipping Clark Gable for a best actor Oscar. “The Roaring Twenties,’’ Warner’s formal farewell to the gangster movie. “The Hunchback of Notre Dame,’’ RKO’s attempt to deliver an epic of its own.

And still more: “Young Mr. Lincoln,’’ “Only Angels Have Wings,’’ “Love Affair,’’ “Each Dawn I Die,’’ “Intermezzo,’’ “Golden Boy,’’ the last two introducing a pair of the factory’s next generation of stars, Ingrid Bergman and William Holden. Even Paramount’s “Midnight,’’ a screwball comedy with no thoughts of eternity in its elegant little head, plays as streamlined near-perfection today.

This is why the other years can’t match up. In 1975, 1986, 1999, Hollywood wasn’t a cogent machine but a collection of entities and personalities at odds with one another. The momentum isn’t there, the sense of a cultural juggernaut working on all its virtually integrated, trade-restraining cylinders to provide - what? Not the most meaningful movies or the most artistic, although that could be an industrial byproduct.

Instead, the studios understood that well-crafted, powerfully entertaining movies were the surest route to prestige and profitability. If they had to make the dreams great to make them sell, they could. And they did.