In 1969’s ‘Dillinger Is Dead,’ alienation is alive and well 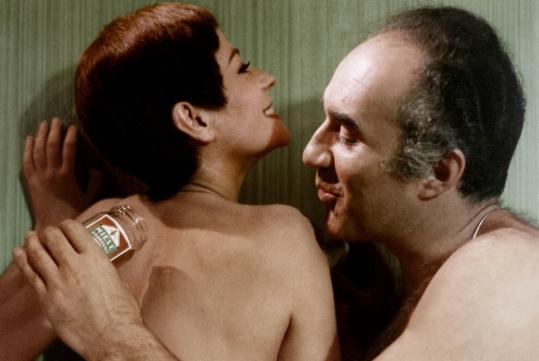 Pity the unsuspecting moviegoer who wanders into the Brattle expecting to see the new Johnny Depp film. “Dillinger Is Dead’’ is, instead, an unearthed rarity: a dryly rapturous 1969 drama of modern alienation directed by the excellent, underrated Italian filmmaker Marco Ferreri (1928-97). With sizable debts owed to mid-’60s Jean-Luc Godard, “Dillinger’’ is one of those artful endurance tests that views conventional storytelling as a sell-out. Yet the movie’s also playful, droll, and unexpectedly wise within its rigorous framework.

The central figure is Glauco (Michel Piccoli, traces of corruption from Godard’s “Contempt’’ still clinging to him like smoke), a manufacturer of industrial gas masks. He comes home one night to find his wife (Anita Pallenberg) in bed in a bourgeois stupor, the maid (Annie Girardot) getting randy with a poster of an Italian pop idol, and an unappetizing dinner left out on the kitchen table.

He proceeds to make a second dinner, consulting the cookbook with the relish of a true gourmand (at least he doesn’t eat himself to death, as do the characters in Ferreri’s 1973 transgressive masterpiece, “La Grand Bouffe’’). During the course of his kitchen explorations, Glauco unearths a suitcase; inside is a rusting pistol wrapped in a 1934 newspaper announcing the demise of America’s Public Enemy #1. We see brief newsreel footage of Dillinger, grinning confidently in captivity.

Glauco pours a little olive oil on the pistol, takes it apart and reassembles it with culinary detachment - the same detachment with which he deals with his wife and his life. “Dillinger Is Dead’’ sticks around that apartment for almost all its 90 minutes, and while nothing much appears to happen, its vision of a human race profoundly out of synch with its surroundings grows more and more biting. Media is always coming between Glauco and the world - pop songs on the radio, television programs, the home movies he projects on the wall and with which he tries to merge in odd, pathetic little dances of the self. You start wondering what you yourself may look like when no one else is in the kitchen. If a soul falls and no one’s listening anymore, does it make a sound?

This being 1969 and heavy on the inscrutability, there’s a bedroom scene involving the maid that’s both erotic and no fun whatsoever, and that gun has to go off at some point - Ferreri’s one concession to drama as we know it. I do wish the movie made better use of Pallenberg, who’s at her most insolently sexual a year before she appeared in the classic “Performance’’ and who here never makes it out from between the sheets. You could argue, though, that the movies as a whole never made the best use of Pallenberg. Keith Richards’s gain turns out to have been our loss.

By the end, Glauco’s life has been disassembled in chilling poetic fashion, and yet he’s the author of his own fortunes; the film’s baleful gaze extends past the screen to the audience watching in the dark. “Dillinger Is Dead,’’ a sort of spiritual snuff film, ultimately does share something with the new Johnny Depp movie. John Dillinger’s the most alive presence in both.

Written by: Ferreri and Sergio Bazzini