A gentle portrait of a couple with an eye for art: NYC collectors with connections 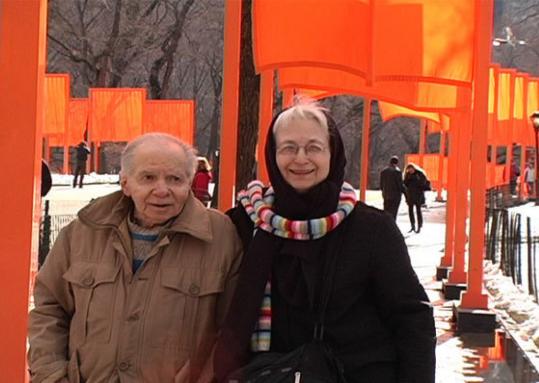 For a young artist in the middle of a project, having Herb and Dorothy Vogel drop by your studio must be like a set of grandparents stopping in. They want to see how things are going. He sits down at the table and starts making assessments. The artist mentions that he’s not quite done yet. Herb basically disagrees. Oh, I think you are, he says. A moment more or less like this happens in the fond if uninspiring documentary Megumi Sasaki has made about the couple. “Herb & Dorothy’’ presents these two as an inseparable pair of buddies who cultivated a passion for art, first as creators then as hugely important New York collectors. They began in the 1960s, and they’re still at it.

Seemingly limitless access is what makes the movie interesting. Sasaki hangs around the couple’s modest New York apartment, follows them to openings, and presents slideshows of Herb and Dorothy in their youth. (He’s currently in his late 80s. She’s in her mid-70s.) Sasaki also gets big names to sit for her camera - Chuck Close, Robert Mangold, Lucio Pozzi, Christo and Jeanne-Claude - and tell stories about Herb and Dorothy that both capture them as open-minded people and convey why they matter to conceptual and minimalist art.

The Vogels have been persons of interest for years in part because they’ve amassed a staggeringly large collection (about 4,000 works) without the usual deep pockets or fancy schooling (the tagline for the film is, “You don’t have to be a Rockefeller to collect art’’). He worked at the post office. She was a librarian. Dorothy explains that they used her salary to pay their living expenses and his salary to buy the art.

Their first piece was a small John Chamberlain sculpture purchased in 1965. Dorothy explains that she and Herb settled on the minimalist and conceptualists because the Abstract Expressionists and Pop artists were too expensive. In the mid-1960s and 1970s, minimalism and conceptualism were largely unheralded, and the Vogels liked the cerebral work of Donald Judd, Carl Andre, Joseph Kosuth, and Sol Lewitt. Close says that what’s remarkable about Herb and Dorothy is how they loved the most difficult, unlovable pieces.

That the couple bought directly from the artists became controversial. Dealers have accused them of exploiting artists who weren’t selling their pieces for what they were actually worth. The movie mentions this, but doesn’t explore whether or how deeply they affected the art market. Sasaki seems content to leave us with the impression that they’re a pair of adorable eccentrics, the sort who share a cluttered apartment with lots of pets.

It’s impossible to leave this movie believing that the Vogels are weirdos or naifs. A wealth of artists and curators testify to their strong eye, unwavering enthusiasm, and clear judgment. More than once, the film shows Herb and Dorothy meeting with curators at the National Gallery of Art in Washington for an astounding project that began last year in which the couple would donate and distribute more than half the pieces in their collection to museums around the country.

Obviously, they’re excellent businesspeople. Herb refuses to discuss what they pay. Fair enough. I was actually more curious about where they put the art.

With: Herb and Dorothy Vogel