A dangerous love triangle in ‘Jerichow’ 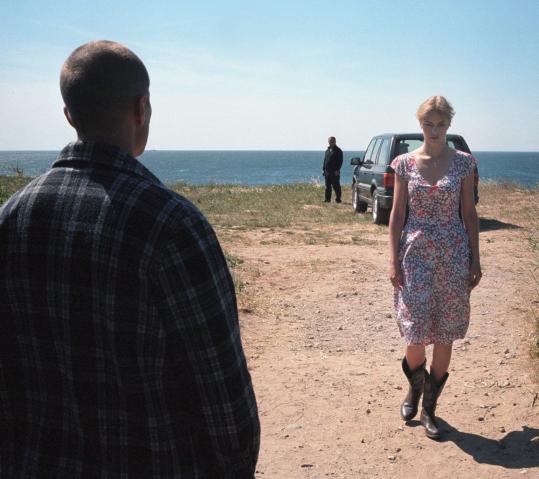 As ridiculous German suspense dramas go, you could do worse than “Jerichow.’’ It’s the sort of movie in which you know what’s likely to happen because whoever made it - here that would be Christian Petzold - appears to have just discovered concepts like foreshadowing and irony. In “Jerichow,’’ when a toy cigarette lighter makes an appearance in one early scene, the camera bears down on it so egregiously that you’d have to doubt the competency of the filmmaker who failed to use it pivotally later on.

In matters of flagrance, Petzold knows what he’s doing. Most of the movie’s pleasure stems from it.

The lighter belongs to Thomas (Benno Fürmann), a former soldier, dishonorably discharged during a tour in Afghanistan. His mother has just died and left him a cozy shack in the former East German town of Jerichow. But an acquaintance to whom Thomas owes money collects, so Thomas is broke, forced to take a job picking cucumbers. (Fürmann looks unhappy the entire film but never more so than when he’s suspended over a cucumber patch tossing vegetables onto a conveyor belt.) Thankfully, trick screenwriting intervenes, pushing Thomas into the lives of Ali (Hilmi Sözer) and Laura (Nina Hoss), a couple with a successful snack-truck business and some marital problems (her eye looks black the second time we see her).

Ali needs a driver after his license is suspended for driving drunk. Thomas needs the cash. And so an uneasy kind of friendship forms. We know what we’re in for when Ali starts pushing Laura on Thomas and Petzold starts to push a sighing string arrangement that flares up at the possibility of these two being near each other. Yes, an affair gets underway. Thomas and Laura can’t keep their hands off each other, usually with Ali just out of earshot.

Poor self-pitying Ali. A German of Turkish origin, he feels unwanted in Germany. He beats both his native, blond wife and his employees because he doesn’t trust them. It’s an unfortunate animal part, but Sözer’s uncommonly delicate performance rescues it from total savagery. Even when beset with so many screenwriting contrivances, Sözer keeps the character completely human.

Like nearly everything in this movie, Ali’s outbursts are a device. Most of “Jerichow’’ is eerily reminiscent of James M. Cain’s novel “The Postman Always Rings Twice.’’ The suspense even comes from a similar place: Will these two get caught?

A more serious movie wouldn’t play so many games in telling us. But the cheap thrill of “Jerichow’’ is this very ridiculousness - the way dramatic irony is weaponized to beat characters into feeling tragic shame; the way Thomas becomes the least instinctive soldier in military history (how is everyone able to sneak up on him so easily?); the way he becomes so desperate to see Laura that he jeopardizes the entire affair by creeping onto Ali’s property and grabbing her, hilariously, from behind a tree while Ali is nearby rooting around for an intruder.

This is silly romance. It’s sillier suspense. But I’m not above saying I enjoyed it.

In German, with subtitles