Ice Age: Dawn of the Dinosaurs

‘Ice Age’ has some cool dinos, but few roars of laughter 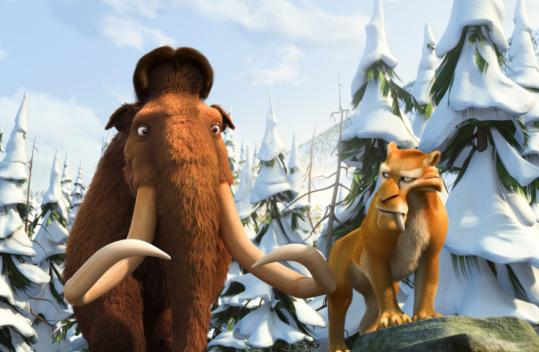 First, a clarification for annoyed paleontologists everywhere: The makers of “Ice Age: Dawn of the Dinosaurs’’ are aware that woolly mammoths and Tyrannosaurus rexes never actually shared time and space on our planet. But there’s a reason they team up in this 3-D sequel anyway. Dinosaurs are cool.

For those who need more justification, the screenwriters of this third installment in the “Ice Age’’ series offer up a stale and sketchy premise. Their story involves a lost world that plays out far beneath the frozen tundra, where lush tropical jungles somehow thrive, Jurassic beasts still roar, and the most menacing creatures turn out to be total softies once you get to know them.

“Dawn of the Dinosaurs’’ begins, as every movie in this franchise has, with the travails of a hapless, show-stealing, fanged squirrel named Scrat (voiced by Chris Wedge, director of the original “Ice Age’’). Scrat is forever enthralled with a prized acorn that keeps slipping from his grasp, but in this film his love for the nut is tested by a beguiling female. Their fiery romance, set to a Lou Rawls soundtrack, gives Scrat more screen time than ever; unfortunately, it’s largely wasted on cliches (he muscles her during a tango; she makes him rearrange the furniture) barely befitting an episode of “Everybody Loves Raymond.’’

Meanwhile, the official stars of the movie have their own tired tango to dance for directors Carlos Saldanha (“Ice Age: The Meltdown’’) and Michael Thurmeier. As mammoths Manny (Ray Romano) and Ellie (Queen Latifah) prepare to welcome their first offspring, Diego the saber-toothed cat (Denis Leary) contemplates leaving the herd to regain his predatory edge. The possums, Crash (Seann William Scott) and Eddie (Josh Peck), bicker as usual. And lovable, lisping Sid the sloth (John Leguizamo) bonds with a trio of dinosaur eggs.

When mama T-rex comes looking for her triplets and kidnaps Sid as well, Manny and the gang are plunged into an adventure that pulls them far underground, through the Jungle of Misery, over the Chasm of Death, across the Plates of Woe, right to the brink of Lava Falls. Their guide through all of this is Buck (Simon Pegg), a crazed, swashbuckling weasel with a leafy eye-patch and a Cockney accent. He’s a spirited and mildly funny addition to the cast, but he’s not a shining comet like Sacha Baron Cohen’s King Julien in “Madagascar.’’

That’s too bad, because “Dawn of the Dinosaurs’’ sure could have used something to grab onto. It’s mostly flat, despite being presented in 3-D, and the writing is so unimaginative that at one point a character yells out “yabba dabba doo!’’

There are a few stirring sequences, including a swooping flight aboard a pterodactyl. Subterranean landscapes are richly drawn. There’s also enough snarling peril (parents beware) to quicken the pulse of young viewers.

Yes, dinosaurs are cool. Just not cool enough to save this sequel.

ICE AGE: Dawn of the Dinosaurs