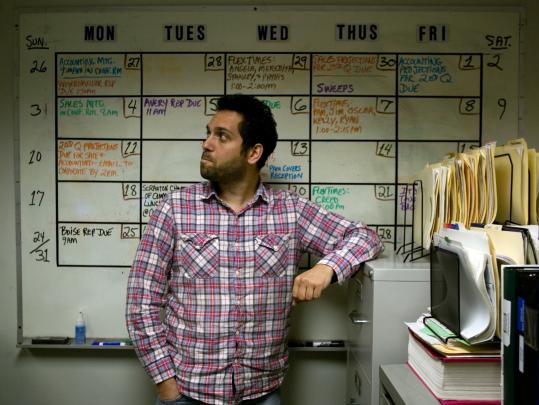 He’s had box-office smashes with “Caddyshack, “Stripes,’’ and “Ghostbusters’’ but writer-director Harold Ramis struggled for decades to bring his idea for a caveman buddy movie to the big screen. “Year One’’ had physical humor and dirty jokes, but at 64, Ramis worried about how he might reach the film’s young target audience.

Then Ramis met Lee Eisenberg, a rising young screenwriter from Needham, and his writing partner, Gene Stupnitsky. A triumvirate was born that not only has brought Ramis’s long-awaited comedy to theaters this weekend, but may just position Eisenberg, 32, as one of Hollywood’s hottest young comedy writers. Next up for him and Stupnitsky? The coveted job of writing “Ghostbusters III,’’ to which Bill Murray, Dan Aykroyd, and Ramis himself are committed.

In Hollywood circles, Eisenberg and Stupnitsky have developed a particular niche.

“They write dumb characters really intelligently,’’ says Ramis. “People can say the dumbest things but they’re so clever and surprising it makes you laugh and not have contempt.’’

“Year One’’ showcases the manic star power of Jack Black and features Mel Brooks-worthy scenes in which Black and fellow cave dweller Michael Cera stumble upon such Old Testament figures as Abraham and Isaac. But it also has the subtle comedy that’s become the mark of Eisenberg, who scores his first screenwriting credit on the film.

Early reviews have been mixed to negative, with the movie savaged by the New York Daily News (not to mention the Globe) and called “silliness run mildly wild’’ by Entertainment Weekly.

Already established as an executive producer on NBC’s Emmy-winning comedy, “The Office,’’ Eisenberg, along with Stupnitsky, has penned more than a dozen episodes. He embraces what he calls “cringe comedy, awkward moments.’’

Take the multi-episode subplot on “The Office’’ in which Dwight kills Angela’s cat. “The idea of a mercy killing occurring on any prime time show - and the fact that it was a cat -was just so weird and wonderful,’’ says Mindy Kaling, a writer and actor on the series.

You might imagine a teenage Eisenberg as the class clown, an attention-grabbing jokester. But he wasn’t. Back in Needham, Eisenberg, the oldest of three children, was a strong student remembered by his high school teachers for working hard. He wrote a novel for a senior project. He majored in English at Connecticut College.

Eisenberg first met Ramis in the summer of 1999 at Alchemy, a restaurant on Martha’s Vineyard. Eisenberg was working as a waiter. Later, when Eisenberg arrived in Los Angeles, not long after college graduation, he got a job as a production assistant on the Ramis-directed “Bedazzled.’’ He met Stupnitsky, then an intern, at the copy machine.

For a time, they wrote together but without any of their scripts being turned into shows. Then, in 2004, Eisenberg got what he thought was his big break. The producers of the military-themed TV courtroom drama “JAG’’ wanted an episode. Knowing nothing about his subject, Eisenberg struggled.

“I tried putting in as many military acronyms as possible,’’ Eisenberg says. “It was essentially unreadable. Like a declassified Pentagon diagram.’’

The producers nixed the script and didn’t ask him back. That led the writer to seriously consider culinary school. But before he could apply, Greg Daniels, the former ‘’Simpsons,’’ ‘’Saturday Night Live,’’ and “Seinfeld’’ writer serving as co-creator of “The Office,’’ read an unproduced pilot Eisenberg and Stupnitsky had written for Fox. He loved it.

According to Kaling, Eisenberg’s goofiness and warmth play off Stupnitsky’s darker side. The curly haired writer, partial to untucked shirts and a scruffy layer of whiskers, is also a source of intrigue.

“One of the writer’s room obsessions is why Lee hasn’t settled down because girls really throw themselves at him,’’ she says. “I think he’s picky.’’

Eisenberg, who is single, avoids commenting on Kaling’s theory. He does admit that he and Stupnitsky spend much of their time holed up writing. They need each other.

“The proof is in the pudding,’’ Stupnitsky says. “Neither of us were doing very well on our own.’’

Except for a brief time - Eisenberg’s “JAG’’ foray - they’ve remained a team. They’ve also remained committed to “The Office,’’ even as their movie assignments took off. They say they’ve never considered quitting the show.

“We did everything possible to make ‘The Office’ feel we weren’t missing any moment of work and make Harold feel he had hired the right guys,’’ says Eisenberg.

Ramis came up with the concept of “Year One’’ when he was in college and heard Mel Brooks and Carl Reiner doing “The 2000 Year Old Man.’’ He originally envisioned John Belushi and Dan Aykroyd in starring roles. It wasn’t until recently that Ramis decided to really refocus on making the film.

In the film, Black and Cera play Zed and Oh, bumbling friends banished from their village. For the writers, the rough split involved Eisenberg focusing on Oh’s dialogue and Stupnitsky taking on Zed’s lines.

With the movie now done, Eisenberg says he and Stupnitsky hope to oversee a production company, to manage a group of writers and develop television shows. For now, though, he’s just happy to stick with “The Office.’’

“The sad reality is that writing is never fast,’’ he says. “But when things are going well and you’re sitting around with your best friend trying to make him laugh, that’s a pretty good way to make a living.’’