"Moon'' is a lonely place 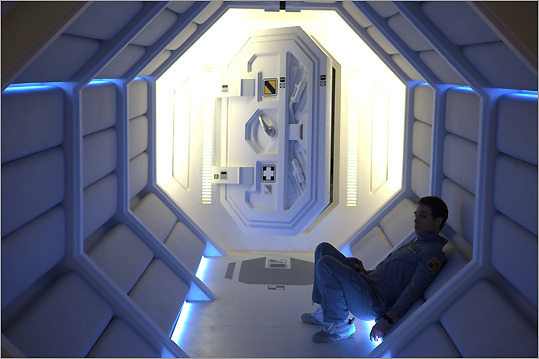 ‘Moon’’ might be a once-in-a-lifetime experience for fans of Sam Rockwell. Will there ever be more of him in one movie than there is here? This is partly a matter of time (he’s in the whole movie). But it’s also a matter of volume: There’s more than one of him. Rockwell in duplicate is the most interesting thing about “Moon,’’ which, sadly, is not a command. Generically, it’s a place; specifically, it’s where Sam Bell, the astronaut Rockwell plays, is two weeks away from the end of a three-year stint mining a new energy source for Earth.

Sam lives in a cavernous space station (it’s like the most immaculate nightclub bathroom ever filmed). He speaks to his wife and daughter via video chat. He heads out in a lunar vehicle to do repair work. He makes small talk with his Gerty 3000 Robotic Assist, which cuts his hair, has emoticons for facial expressions, and holds his conversations in a voice not unlike that other famous talking movie supercomputer’s, the HAL 9000. (The voice is actually Kevin Spacey’s.)

Sam is injured on one of his repair missions. When he awakens, he finds he’s not alone. Another Sam is exercising in the rec room. The original Sam is delirious from the accident and distrustful of his clone. From where has this sterner, more virile Sam come? And why in his jumpsuit does he looks like Tom Cruise in “Top Gun’’?

Written and directed by the first-time director Duncan Jones, “Moon’’ devotes itself to the mystery of the multiplying Sams. It’s a modest, melancholic undertaking, and a little virtuous, too (in Sam’s PG-13 sex dreams, his wife’s bra miraculously stays on).

The film’s cinematic references are clear - throw a rock at your video store’s nearest science-fiction shelf. But since we spend so much time in a kind of “2001’’-meets-“Solaris’’ scenario, one with its strains of Ray Bradbury, we’re invited to notice how little vision or scope or psychological texture there is in “Moon.’’ As Sam’s situation turns strange, despairing, and eventually sinister, the movie’s initially welcome modesty becomes a limitation. Nothing here is as interesting as it seems.

Jones is the son of David Bowie, and it’s not terribly imaginative to connect his movie to the great interstellar interval of his father’s rock ’n’ roll. Of course, Jones makes it easy. He could have chosen to make a movie about, say, puppies but made this instead. Using Chesney Hawks’s decidedly un-Bowie early ’90s pop anthem, “I Am the One and Only,’’ as Sam’s morning alarm is a nice attempt to throw us off. Anyway, “Moon,’’ with its loneliness and yearning for home, is more “Rocket Man’’ than “The Rise and Fall of Ziggy Stardust.’’

All the spaced-out sadness of Elton John’s song is apparent in Rockwell’s clones (there are more than one). Jones says he wrote “Moon’’ for his star, and that smacks of good, sideways taste. Not many directors would be so inspired to hand over an entire film to a man whom the movies have never quite figured out. Rockwell is compactly built, has a wide toothy mouth, and says all his lines with a nasally twang.

By conventional movie-star standards, Rockwell’s just south of handsome. The unstable characters he’s played in films like “Confessions of a Dangerous Mind,’’ “Matchstick Men,’’ “Snow Angels,’’ and “Choke’’ have made him an endearing mystery to be solved: character imp or leading man? “Moon’’ doesn’t resolve the matter. Surely some movie will, but, happily, I think it’s going to be a long, long time.

Duncan Jones, David Bowie's son, is at home on the dark side of the "Moon."

Written and directed by: Duncan Jones

Starring: Sam Rockwell and the voice of Kevin Spacey