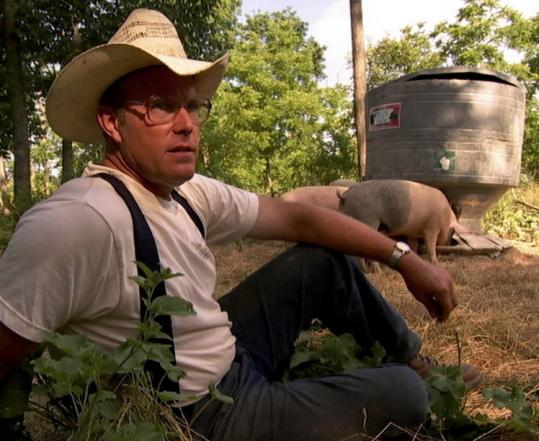 As you might gather from the title, Rob Kenner’s documentary “Food, Inc.’’ is, in part, concerned with the extent to which industrial food production has replaced farming in America. It’s part activism, part school-assembly lecture. If you’re told where most fast-food chains’ ground beef comes from, how much E. coli is in it, how much ammonia has been added to kill the E. coli, and how many illegal immigrants the meatpacking companies recruit, underpay, and leave prey to police raids, will you still want to eat that double cheeseburger? The filmmakers are guessing no. The whole thing is as subtle as a watermelon in a bowl of Cheerios but necessary, nonetheless.

Kenner takes us up and down the food industrial complex. He has hidden-camera footage of a hog-farm kill floor and pastoral images of Joel Salatin and his employees working on his modest, seemingly all-natural farm in the Shenandoah Valley. He tags along as Barbara Kowalcyk, a food-safety advocate and mother who lost a young son to toxic beef, makes the rounds on Capitol Hill. The film photographs Eduardo PeÃ±a, a union organizer in North Carolina, as he watches cops bang down the doors of Mexicans who work in Smithfield Foods’ slaughterhouse. We meet Carole Morison, a poultry producer for Perdue until she refused to make expensive Perdue-mandated upgrades to her chicken house that, she says, would have kept the birds in total darkness (by her own admission, they had it pretty awful in the first place). This is food and its vast discontents.

The movie covers all the bases, from possible government corruption to the bad consequences of good economic sense. With regard to the latter, Kenner finds a family of four whose mother says she buys fast food because its cheaper than fresh food. There’s not much room to argue with her. Almost everywhere, a pound of broccoli costs more than anything on the McDonald’s value menu. Her husband is a diabetic whose diet, like a lot of Americans’, includes foods loaded with high-fructose corn syrup, a sweetener that helps use up the country’s abundant government-subsidized corn crops. But the mother is in a bind since they have to pay for his medical needs, in addition to their other expenses, while praying his poor health doesn’t cost him his job as a trucker.

One imagines a movie devoted almost entirely to the hard issue of eating and class, how processed foods are cheaper than fresh food. Of course, some nights the drive-thru is the easiest thing on earth. None of the heroes in “Food, Inc.’’ - and I’m sure Kenner finds all his human subjects heroic - is likely to buy that excuse. This isn’t a movie terribly big on listening to why you just ate that Baconator.

Folks like Salatin, Kowalcyk, and Gary Hirshberg, the founder and CEO of Stonyfield Farm yogurt (it’s organic), have specific but complementary points of view. And Kenner allows them their righteousness. In college Hirshberg was a hippie environmentalist, and he explains that his environmentally conscious company’s relationship with (there’s a funny scene of some doofy Wal-Mart executives visiting a Brattleboro dairy farm) isn’t selling out. He’s doing good for everybody. He’s probably right, but like many of the people in this film, he so knows he’s right.

The movie itself is cleanly made and features the sort of imaginatively conceived graphic design that, lately, a lot of documentary directors use in lieu of actual filmmaking. A more visually expansive, soul-chilling, and lecture-free cousin of “Food, Inc.’’ is Nikolaus Geyrhalter’s “Our Daily Bread,’’ a 2005 documentary that requires you to think for yourself about your relationship to what you eat. “Food, Inc.,’’ while more optimistic, doesn’t care for art or letting you make up your own mind. Time, it says, is of the essence.

Most of what Kenner tells us has been documented in other films and published to famous effect in Eric Schlosser’s “Fast Food Nation’’ and the books of Michael Pollan, both of whom appear in the film and consulted with Kenner on its making. That activist spirit extends all the way to the closing minutes, which feature a pamphlet-load of advice (“Plant a garden,’’ “Buy locally’’) while Bruce Springsteen sings “This Land Is Your Land’’ (I know, I know). As a blunt instrument of civic, moral, and social responsibility, the movie works, anyway. Releasing it during the summer seems like an iffy idea, though. This is a school-trip movie if ever there was one.

Rating: PG (some thematic material and