'Away We Go' journeys from serious to smug 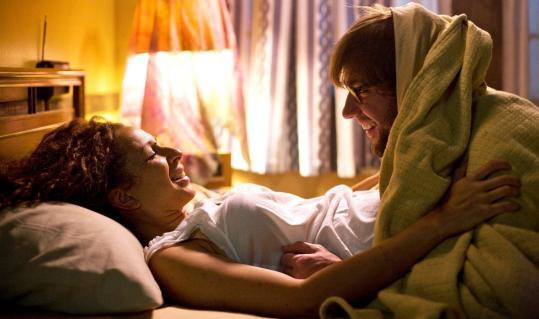 Maya Rudolph and John Krasinski play an expectant unmarried couple who travel around the United States and Canada looking for a place to raise their baby. (Francois Duhamel/Focus Features via Associated Press)
By Wesley Morris Globe Staff / June 12, 2009
Text size – +

"Away We Go" is a road movie for idealists. Verona and Burt (Maya Rudolph and John Krasinski) cross the continent in pursuit of the perfect place to raise their unborn baby. Among other cities, they try Tucson, Phoenix, and Montreal, hoping one of them feels right enough to stay. Each location introduces a friend or relative of varying emotional stability and promises an opportunity for situation comedy, situation melodrama, or, during a stop in Madison, Wis., both. "Away We Go" left me in a situation, too.

Dave Eggers and Vendela Vida, the Paul Newman and Joanne Woodward of the literary journal universe (he of McSweeney's, both of the Believer), wrote this film, which the Englishman Sam Mendes, of "American Beauty" and "Revolutionary Road," directed. And in tone and plotting, "Away We Go" feels like a fairy tale built on an aggravating collection of attitudes. It's condescending, judgmental, righteous, yet sincerely searching. It's also the very rare American movie about men and women in their 30s - intelligent, articulate, appreciably lifelike people; people with insecurities and volition and a sense of humor.

An entire generation of directors and writers is passing through their adult youth sucking their thumbs and staring at the navels of their teenage selves in movies like "Adventureland" and "Lymelife." They go to work in Judd Apatow's hormone factory, which cranks out hypersensitive male nostalgia comedies about a strain of permanent adolescence. Those movies, as pleasurable as some of them are, feel only loosely connected to the actual world. No one begrudges Wes Anderson, David Gordon Green, or Spike Jonze their dioramas, sand castles, and microcosms, but it would be nice for their worlds to meet ours.

At the very least, "Away We Go" acknowledges passage into a rite of adulthood. The usual Sturm und Drang of balls, chains, and sacrifice, of marital regrets and misgivings doesn't happen. Verona and Burt aren't asking what kind of grown-ups they want to be. They're wondering what sort of a mom and dad they'll make. That parental existentialism gives the movie moments of beauty, mostly when the couple are lying around thinking aloud, once on a trampoline in Miami exchanging child-rearing vows. (She refuses to actually marry him, in part because her deceased parents wouldn't be able to attend the wedding.)

The problem with the movie is how it's rigged for them to arrive at their conclusion. Verona and Burt's North American tour turns up a collection of role models dubious enough for them to feel better about themselves. They begin with Catherine O'Hara and Jeff Daniels as Burt's rambunc tious parents. Three months before the baby is born, they've decided to hightail it to Belgium even though Verona and Burt moved into a nearby woodsy shack to be closer to them.

In Phoenix, they're attacked by Allison Janney, playing a bawdy, deeply tanned former co-worker of Verona's named Lily. Lily is an insult machine, mocking her kids (Conor Carroll and Samantha Pryor) and stifling her husband (Jim Gaffigan) with her exuberant negativity. In Madison, dinner with Burt's cousin (Maggie Gyllenhaal), a hippie, New-Agey, women's studies professor, and her husband (Josh Hamilton) turns into the sort of horror-show clash of personalities you once could find with great regularity on "Wife Swap."

All of these women are underminers. More than one of them makes a casual racial put-down regarding Verona's being black. Their comments seem forced to cast the offenders in a bigoted light, to remind folks who don't know that Rudolph is indeed black, and to laugh at a certain type of progressive liberal.

Many of these scenes are torn between real farcical comedy and an annoying self-congratulation designed to make Verona and Burt appear more virtuous and together than these nut cases. But the women playing the shrews and loudmouths are full of comic zest. O'Hara speaks at exhilarating gale force. Janney looks like a leather sofa that squawks and snorts yet still manages to be an impressive piece of furniture. And Gyllenhaal resembles some indomitable woman from one of those John Currin mock-Renaissance portraits. They embarrass Krasinski and Rudolph, putting her especially in the unfortunate position of having to use primness to convey goodness.

Rudolph spent years on "Saturday Night Live" alongside Tina Fey and Amy Poehler. They were the Supremes of sketch comedy (I'll let you argue over who was Diana Ross). Here she sits and watches the other actors freak out and melt down. Verona's stability is meant to demonstrate strength, but a woman determined to spend her life with a goofball like John Krasinski ought to show some evidence of a lunatic streak. When Rudolph reads a children's story in a funny voice, all you can think is, "Where did that come from?"

Of course, going bananas would not have been the only way to play this material. Verona and Burt's trip to Montreal turns up Melanie Lynskey and Chris Messina, two underappreciated actors, as a pair of old college friends who've adopted a multiracial gaggle of happy kids. The parents have suffered tragedy, and Lynskey dramatizes sadness and dysfunction with quiet, moving physicality. That character's whole life is there in her long face and drooping limbs. It's the best performance in the movie.

Mendes does almost everything right with "Away We Go," which is a relief after watching him do almost everything wrong with "Revolutionary Road," where willful, museum-ready staging suffocated even the marital clichés. This new movie is looser and less oppressively styled than anything Mendes has tried before. He likes all the feral female energy.

The movie is like one of David O. Russell's manic, ranging comedies ("Flirting With Disaster," "I Heart Huckabees"), but it doesn't have enough of Russell's keen screwball surprise or human generosity. Mendes can't entirely surmount the smugness that pollutes Eggers and Vida's picaresque script, either. (It's the same smugness that chokes their books.) This is how you raise a family, the movie finally says, while remaining blind to not-insignificant matters of upbringing, class, and community. "Away We Go" doesn't celebrate life. Weirdly, it champions leaving life behind. Away, indeed.

AWAY WE GO Directed by: Sam Mendes