My Life in Ruins

Love, and some laughs, among the ruins 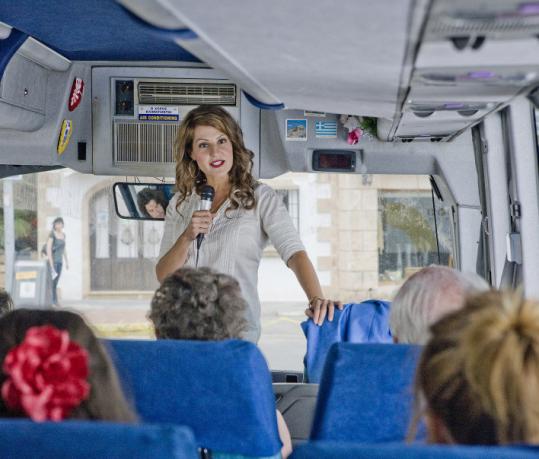 The folks responsible for "My Big Fat Greek Wedding" - the "ethnic" romantic comedy that ate the 2002 box office - have made "My Life in Ruins," a second cute, shoddy-looking movie. The Ruins are Greek. The life, once again, is Nia Vardalos's. The problem with the new movie is the same as with the previous one. Vardalos has this idea that she's a marm. And while it's true that she personifies her movies, I don't quite buy her librarian mode.

In "My Life in Ruins," the American tour guide she plays, Georgia Yanakopulos, wants to educate the travelers on her tours about Greek history (she's an unemployed professor). Georgia knows the dates every column was erected, who lived where, which god thought what. Yet the evaluations sent to her undermining boss (Bernice Stegers, who's a hoot) complain that her tours are boring. People just want to tan, eat, hook up, and shop - goals one should be able to achieve without signing up for a weeklong trip on a tour bus, but never mind. The point is that Georgia doesn't please her crowds. She numbs them with facts.

There's a degree of narcissism to Vardalos's self-deprecation. She may want us to find her plain, but she snuffs out any chances at being naturally funny. Charming might work for her, but she can't be above the zaniness that surrounds. When Dreyfuss tells her to lighten up he's doing the job of the movie's actual director, the dutiful Donald Petrie. Vardalos has a loony, Streisand side. But here she lets the rest of the cast clown it up, while she plays the wallflower. You have to believe in this approach to comedy for it to work. And I don't believe Vardalos when she plays it this straight.

If you happened to catch her on the run with Toni Collette, as half of a drag-cabaret team in the horribly underrated "Connie and Carla" - and I'm betting you did not - you know that she's smarter, brighter, and loonier than the humorless, put-upon women she plays in these Greek movies. There's comedy in being put-upon, by the way, but in both her Greek movies, Vardalos leaves most of the gags to the actors hamming it up. Here, instead of Andrea Martin and Lainie Kazan blurring the line between bawdy stereotype and the way it is as they did in "My Big Fat Greek Wedding," we get, for instance, Caroline Goodall as an uptight English matron. She's not amusing in the least.

But neither really is Vardalos. We're supposed to believe that Georgia has neither inner life nor native sexiness. But when she actually does cut loose with little vamps, she's so good at it that the character's primmer version seems like a gag. Worse, the screenwriter, Mike Reiss, possibly in an attempt to capture the first movie's Prince Charming feeling, pushes Georgia into the bus driver's arms, which makes no sense since Dreyfuss is right there.

After so many movies of grizzled, shady characters (his face and modest girth still carry traces of the Dick Cheney he played in Oliver Stone's "W."), mercifully, Dreyfuss is his wily, spring-loaded self again. He and Vardalos are funny and sexy together. She makes him laugh. He makes her feel attractive. There's something between them here. And it's impossible to trust a movie that can't see that.

MY LIFE IN RUINS Directed by: Donald Petrie