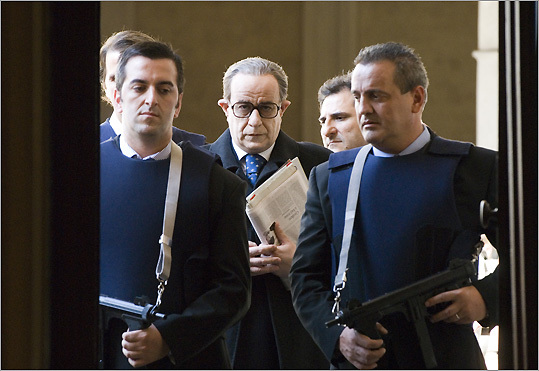 'Il Divo" is showboat moviemaking, but the opulence is of a piece with the film's damning assessment of the durable Italian elder statesman Giulio Andreotti. It begins as a collection of arresting images and concludes two hours later in the same fashion. The opening minutes parade images of murdered bankers and politicians, all of whom are identified by blood-red title cards that pivot, twirl, and swing near the bodies.

Throughout the film, the camera loops and dances. There is pop music on the soundtrack, low-impact electronica, and opera, too. On one level, "Il Divo" is about the degree to which Andreotti and his staff greased the political machine. On another, it's about how the writer and director Paolo Sorrentino can make disco out of dissertation.

Andreotti has been involved with Italian politics since WWII (he was born in 1919 and is still ticking). The film focuses squarely on the twilight of his government service in the 1990s, during and after a seventh term as prime minister (Il Divo is one of the few complimentary nicknames Andreotti has earned). In the second hour, there's a detour to observe the poor attorney general charged with making a case against Andreotti and his men. It's a massive job. But the film imparts both its facts and its bemused contempt as an impressionistic cascade of tableaux vivants. Ordinarily, this much steady gorgeousness might obfuscate indictment, but Sorrentino has also given the film a funereal component, namely in Andreotti himself.

Toni Servillo plays the politician beneath heavy makeup, giant glasses, and a hunched back. Some of the wigs, prosthetics, and potbellies on the other actors look fake, but they all turn the phoniness into a kind of puppet theater, especially with Servillo. His upper body seems to move as a single unit. The arms of those glasses bend out his ears, giving his head a jug-like quality. He speaks softly and passively - the many men around him do the scheming and shouting - and demonstrates little passion for anything. None of this is meant to imply that this Andreotti is not compelling to watch. Servillo's cadaverous performance is macabre satire, draining the blood from Andreotti, replacing it with embalming fluid until what's left appears to be as suitable for a casket as for government.

And what about Andreotti's actual governing? "Il Divo" would have us believe he did very little. The movie makes a case for him as a back-room operator - with Mafia ties. There are some exquisitely orchestrated sequences of men running around the corridor of parliament building and fracturing coalitions. Sorrentino isn't here to pay respects. He's come to throw darts, including several regarding the 1978 kidnapping and murder of the former prime minister, Aldo Moro. Andreotti's government refused to negotiate with Moro's captors and eventual assassins, the radical Red Brigade, and the killing haunts Andreotti, who, here, feels that Moro's blood stains his hands.

The dozens of characters are a chore to keep straight. Once two comely, seemingly inconsequential press secretaries get the same title-card treatment as the muckety-mucks, it's unlikely that anyone not steeped in modern Italian politics should be able to navigate the crowds. For us, there is the visual pageant itself and the way it can raise the pulse. One big party for Andreotti features a band of drummers banging away in one room, and the people dancing do so with complementary force. A montage of suicides includes a single shot in which a body that leaps from the high-rise at the top of the frame plummets toward the camera in unsentimental real time.

"Il Divo" joins Matteo Garrone's more expansive, more extraordinary "Gomorrah" - which contains an even better performance from Servillo - as a grim portrait of the trouble with modern Italy. Sorrentino errs on the side of snideness, but in both cases the news feels grim in its dazzling way. The upside is that while the government and social systems might be hobbled, the filmmaking is robustly intact.