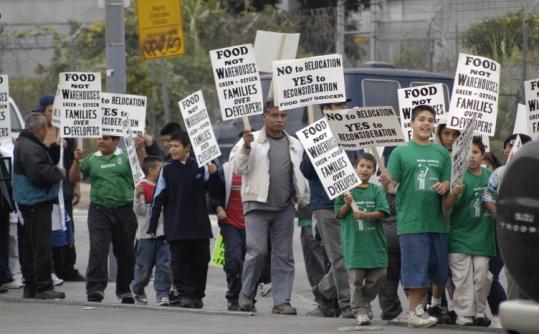 Photos by oscilloscope laboratoriesScott Hamilton Kennedy's documentary ''The Garden'' focuses on people and their crops more than on political chicanery. (Photos By Oscilloscope Laboratories)
By Mark Feeney Globe Staff / May 22, 2009
Text size – +

Seeking to build a municipal incinerator, the city of Los Angeles took by eminent domain a 14-acre site occupied by warehouses in South Central LA in 1986. The purchase price was $5 million. Seventeen years later, the incinerator never built, the city sold the land back to the original owner. The price was only slightly more than in 1986. That was fishy. Even fishier? The deal was kept secret - until eviction notices went out in late 2003 to the 347 families who had been using the land since 1992 as a city-sponsored community garden, the largest in the United States.

"The Garden" was an Oscar nominee for best feature documentary this year, and it's easy to see why. Deeply heartfelt and often moving, Scott Hamilton Kennedy's film manages to be righteous while never giving in to self-righteousness. He clearly has enormous affection and respect for the gardeners (nearly all of them Hispanic). Kennedy shows both them and the bounty of their labors with a loving eye. There's no doubt whose side he's on.

Yet Kennedy doesn't scant the complex tangle of ethnic politics (the gardeners' city councilor was black, the developer Jewish) and conflicting individual interests that shaped the three-year battle the gardeners and their supporters fought to save the garden. When their leadership decides that members of the same family can use no more than one plot, the fury is as great as when the eviction notice is posted.

What Kennedy does scant - can't avoid scanting, really - is the more intriguing story here. The camera can't get enough of the gardeners, either emotionally or visually. "Sounds like a good fight, farmland in the city," says a local-access cable host in a clip that's included in the documentary. He's absolutely right, of course, but what created the fight, as the documentary strongly implies, was chicanery involving the developer, the city councilor, and a community activist (we later learn her son is being investigated on corruption charges on a related matter).

The camera can't really handle such material, though. That's not just because it was done behind closed doors (unlike gardening and protests) or that investigative reporting is something Kennedy isn't in a position to do, even if he'd wanted to be. The problem is more fundamental. Justice and Corruption and Profit are abstractions, and film is so ill suited to deal with abstractions. Nothing is less abstract than food and land and people, things "The Garden" gives us in winning abundance. It's the abstractions determining their fate that the viewer wants more of.

In English and Spanish,