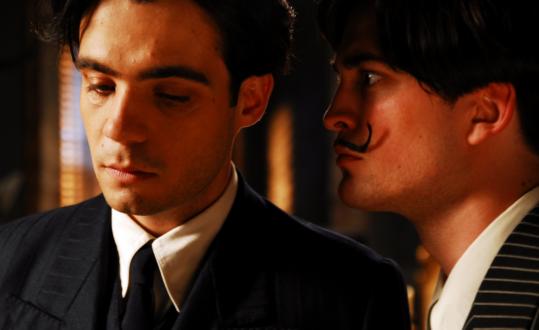 'Little Ashes" is without question the only movie in the entire history of the medium whose potential audience includes both teenage mall-chicks and devotees of 1920s Spanish surrealism. Since that's an awfully small piece of the Venn diagram, we may as well throw in lovers of bad cinema. At least they'll go home happy.

The movie, more's the pity, is meant in all seriousness: a swoony, literal-minded period piece about the youthful days and nights of painter Salvador Dali, poet/playwright Federico Garcia Lorca, and filmmaker Luis Buñuel. Dali is played by Robert Pattinson, the dreamboat fangboy of "Twilight" the movie, and the Internet has been burning up with pirated versions of this film's racier scenes.

All right, give the kid a chance - he's British and he's serious about being an actor. Still, Pattinson will have to do better than this potted soap-opera about lust among Madrid's upper-class artistic bad boys. Based on rumors of a physical affair between Dali and Lorca, "Little Ashes" (the title of an early Dali canvas) envisions the young artist arriving at college in 1922.

Lorca, played by Spanish actor Javier Beltran, is the acknowledged leader of the students rebelling against the old order of Church and State, and he's a nervous wreck from keeping his sexual urges in check. Dali entices him with artistic freedom and carnal bliss, culminating in a midnight swim where their skins literally glow. Over in the corner is Buñuel (Matthew McNulty), ranting against unmanly "maricones" while plotting to whisk Dali off to Paris to collaborate on their pioneering 1929 surrealist short "Un Chien Andalou." What's intended to be a daring look at repressed sexuality, three-ways and all, has the dramatic heft of a true-love comic book.

Pattinson plays the young Dali as a manipulative eccentric, using Lorca to dance close to the fire without actually getting burnt. Later, when the conceptual mustaches and hysteria break out, the actor only embarrasses himself. "Little Ashes" almost works if you view it as a Dada remake of "All About Eve," with Dali in the Anne Baxter role of meek but ruthless user, Lorca as the Bette Davis-style diva, and Buñuel sniping away like George Sanders. If only it were as much fun.

The problem is that both Philippa Goslett's script and Paul Morrison's direction lack the stylistic craziness - the sense of real, lunatic danger - a project like this desperately needs. The boys may insult the stiffs at a fancy dinner party, but the film's point of view is that of a mildly shocked, secretly titillated middlebrow museumgoer. The film's final act follows Lorca into the Spanish Civil War and martyrdom, straining to provide tragic meaning while ignoring the fact that tragedy and meaning were not exactly what these men were about. It hurts the mind to imagine what a director like Pedro Almodovar or the young John Waters could have done with this material.

The most shocking moment in all of "Little Ashes" is an image of an eyeball being sliced open with a razor, and it's a clip from "Un Chien Andalou," still scandalous after 80 years. At a café table somewhere in heaven, Luis Buñuel is laughing himself sick.