THIS STORY HAS BEEN FORMATTED FOR EASY PRINTING
MOVE REVIEW

An idealized ride through India 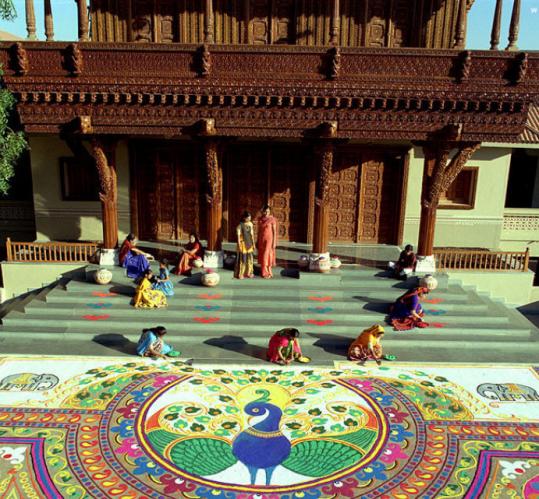 Though technically not an film, "Mystic India: An Incredible Journey of Inspiration" is billed as "the first large format epic on India." But as this promotional short masquerading as a documentary proves, size isn't everything.

The seductive, grandiloquent voice of Peter O'Toole guides us through a greatest-hits package tour of Indian sites. Helicopters swoop us over the snowy Himalayas and across jagged ravines and raging rivers. Crowds of joyous (but largely silent) villagers dance and throw flower petals at festivals, and yogis stand silhouetted under archways and on riverbanks, bathed in amber sunsets. The camera tilts and pans across intricately carved temples as O'Toole intones, "India is a land of colorful customs and fascinating events." Yawn.

The film's 100-plus architectural and geological locations are the backdrop for the true story of 11-year-old Neelkanth, a boy yogi who left his village in 1792 on a solo, seven-year, 8,000-mile, barefoot pilgrimage. In this retelling, the youth climbs glaciers, crosses jungles, stops by the sacred Haridwar River, and visits stunning sites like Badrinath Temple. He uses his yogi powers to survive freezing temperatures. (O'Toole claims "scientists at Harvard and elsewhere" have confirmed this could have happened.) Along the way, Neelkanth pauses under trees, tames a lion, meets villagers, and spreads the gospel: "I have no home, only a journey." The boy goes on to become Swaminarayan, a key figure in modern Hinduism who, the film says, "ushered in rays of hope" and helped unify the nation.

This is an ultra-romanticized vision of a crowded, complicated nation. O'Toole's narration brushes aside India's history of ethnic and religious strife with tourist-board platitudes like "The whole of India seems filled with lamps, firecrackers, and joy." And, because "Mystic India" is set in the 18th century, there's nary a cellphone, smog cloud, or shantytown in sight.

But like on a tedious train or car trip, the landscape can still be gorgeous. Cast a blind eye to the present, and enjoy the pretty ride.