A creepy kind of love 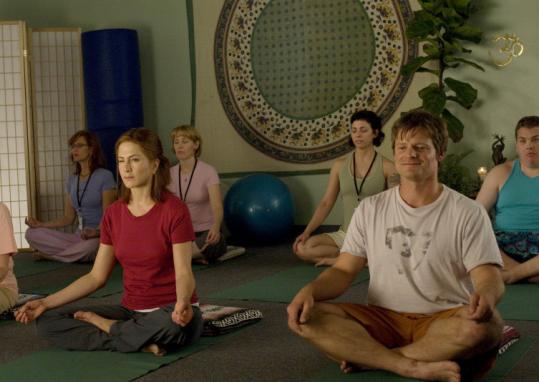 Don't be fooled by the star wattage: "Management" is a small, underwhelming indie comedy about the cuteness of the long-distance stalker.

True, it's a subject the movies have often visited with varying comic returns, from "The Graduate" (Elaine!) to "The Heartbreak Kid" to all those Sundance movies about a noodgy guy pestering his dream girl until she caves in to his questionable charms. Here, the charm curdles fast. What playwright-turned-screenwriter/director Stephen Belber finds adorable, a reasonable person might consider actionable.

Steve Zahn plays the noodge, Mike, a night manager at an Arizona highway motel run by his parents (Fred Ward and Margo Martindale). Jennifer Aniston is the dream girl, Sue, a neatly pressed business traveler who sells office-place artwork and has vague dreams of making the world a better place. Mike is stalled in life until Sue checks in; instantly smitten, he turns up at her room with a dusty bottle of wine, compliments of hotel management.

There are some laughs in the hero's fumbling attempts at romance - he sounds like a toddler trying to talk Shakespeare - and Aniston nicely conveys Sue's alarm with body language and widening eyes alone. Then the script demands that something quite unbelievable happen, and the movie's off on a poky cross-country courtship that finally comes to ground in Portland, Ore.

There Sue is living with a glowering punk-rock yogurt magnate named Jango (Woody Harrelson, just punching the clock), and Mike is resorting to such ploys as parachuting into her swimming pool and crooning Bad Company songs outside her window to attract his true love's attention. By now it's clear that neither actor is able to get a handle on characters who live mostly on the page.

Somewhere inside this slowly paced whimsy is a pained and rather more honest movie about the difficulty of finding one's role in the world - or what some people might call "growing up." Only in the final sequences, though, does "Management" allow real tenderness to shoot forth and you glimpse what might have been.

Belber also seems oblivious to the creepier aspects of his hero's amour fou: Mike repeatedly turns up at Sue's job, leaves her too many voice mails, and ultimately lives in a windowless basement while plotting to conquer her heart. Or maybe there have just been too many recent news stories about men violently refusing to take no for an answer for this movie's intended sweetness not to turn sour.

Sometimes a cute-stalker movie can win the audience's heart. "Management" only makes you ponder the line between true love and a restraining order.

At: Kendall Square and Waltham Embassy