Brothers abound both behind the camera and on-screen in 'Rudo y Cursi,' which reunites Gael Garcia Bernal and Diego Luna from 'Y Tu Mama Tambien' 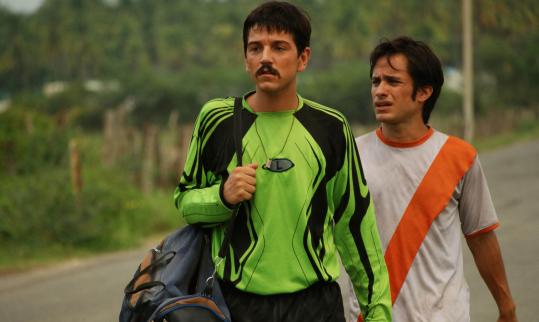 NEW YORK - Gael García Bernal knows the feeling he sought to avoid with his new film, "Rudo y Cursi" - he just can't put his finger on the precise word.

"Normally, in films from Latin America, you would fall into a certain. . .," he trails off, searching to convey a complex notion in his generally more-than-adequate English. "Sorry, I don't know the word in English."

García Bernal's castmate Diego Luna, sitting at the opposite end of the couch, seizes the opportunity for a playful dig: "He doesn't know the word in Spanish, either." Unwilling to give in, the actor presses on. "You can fall into a trap. It's not a farce, but it . . . ay cabrón! I haven't spoken English for a while," he observes, slumping back into his seat.

The word García Bernal tries vainly to define is costumbrista, defined as a 19th-century literary movement interested in "typical or picturesque regional customs," which is precisely what García Bernal and Luna's latest film is not.

The picturesque is nowhere to be found in this story of two brothers, languishing on a rural ba nana plantation, who are discovered by an intrepid soccer scout. He brings them to Mexico City, where unexpected opportunities - and temptations - await. Women, gambling, and the unpredictable waxing and waning of fate interfere with the boys' steady path to fame and fortune.

In conversation, the two actors' easy affection and playfulness - García Bernal walks into the room and falls into speculation over what number cappuccino Luna is currently working on - indicate a bond that extends well beyond the screen.

Pleasurably vulgar, energetic, and unpredictable, "Rudo y Cursi" is a worthy successor to García Bernal and Luna's first collaboration: 2001's memorable "Y Tu Mamá También." That film's co-writer, Carlos Cuarón, is on hand as writer and director, and his brother Alfonso (the earlier film's director) is one of the new film's producers, along with fellow Mexican directorial luminaries Alejandro González Iñárritu and Guillermo del Toro.

Like his star, Cuarón has a word to define what his films are not. In his case, that word is "comedy." "To me, [my films] are both dramas with a lot of sense of humor," Cuarón argues. "Sense of humor is all about the pain of laughter, or the laughter of pain. Most of the time you're laughing at stuff that, if it happened to you, you wouldn't be laughing."

The director's assurances notwithstanding, "Rudo y Cursi" is, like its predecessor, a deeply funny film, albeit one whose humor is laced with pathos. Breakneck shifts in tone - from comedy to tragedy, and all the way back - could have discomfited its actors, but Luna was confident following the lead of Cuarón's script. "We were never thinking, 'This is a moment where we're going to make people laugh,' or 'This is a moment when you're going to make them cry.' In fact, when you try that, many times it goes the other way around, you know?"

Cuarón initially envisioned his feature directorial debut as a drama about an athlete, of humble roots, who rockets to success before suddenly disappearing. "I told this idea to both [actors] separately, and they both said yeah, I want to be that guy," remembers Cuarón. "My problem was that I only had one character. At that point, I realized that I really wanted to work with [both of] them, so I made him a brother. That was my way out." Cuarón spent 2 1/2 years polishing the script, with regular meetings with the actors, and his brother, providing guidance.

Cuarón also got to play the third wheel on another García Bernal-Luna road trip - albeit one with less sexual frisson than the original. "A lot of things came into place, when we went to relive the journey of 'Y Tu Mamá También,' but now with Carlos in the middle," García Bernal says. "We went to the beach, and we spent three days with him. We played football there, we went to the banana plantation, we talked to a lot of people, we had a few beers."

At first, Luna struggled with his role, whose working-class nuances he found to be a stretch. He even attempted to quit before being coaxed back into the fold, and eventually found himself embracing the character of Rudo more than he had expected. "I kept being Rudo in my room, in my house, everywhere, because there was so much happiness around this guy." García Bernal found pleasure in his role, too, using Cursi's musical proclivities as an excuse for his own exhibitionistic flair as an accordion-wielding pop star. "It was like getting away with doing something. I would feel very embarrassed to sing in real life!"

It helped, too, to shoot the film in sequence, with the scenes on the banana plantation wrapped before cast and crew headed to Mexico City. Cuarón's carefully selected color palette distinguishes the movie's separate components. "A lot of greens and a lot of browns, and no reds," Cuarón says of the film's early sequences. "In the city, the streets are gray, the rooftop room is gray. Everything very texturized always, because that's Mexico - many textures. And then, when they are successful players, the world becomes a soccer ball - white, with black dots." Moving from the country to the city, the film also gets steadily closer to its characters. "In the village," notes Cuarón, "it's long shots, it's wide shots. Little by little, it starts to close up. The middle of the movie, it's medium shots. In the climactic scene, you [cut] to the eyes, to the intimacy."

Soccer metaphors notwithstanding, "Rudo y Cursi" is a film more concerned with brotherhood than sports. The final showdown on the soccer pitch described by the director as a western duel, his homage to the collected works of Sergio Leone is less about goals and penalty kicks than the unexpected collision of the two brothers' destinies. Brothers in name if not in blood, García Bernal and Luna have come to define their careers in relation to each other, their prickly, playful, loving fraternal bond onscreen capturing something not only about themselves, but the band of linked creative talents who have helped to revive the Mexican film industry.

Cuarón, like his film's narrator always primed with the perfect aphorism, sums it up. "I like to say it's a movie about brotherhood made by brothers."