In 'Tokyo Sonata,' the everyday is strange 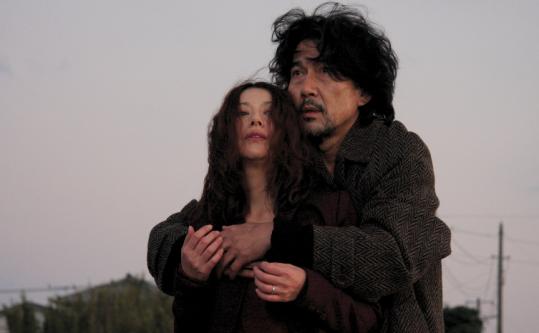 'Tokyo Sonata" begins and ends in calm. But the generic domestic serenity of the opening minutes mutates into an almost otherworldly placidness by the final shot. Sure, the stress of being alive has body-snatched the Sasakis, the typical middle-class Japanese family at the film's center. But so has a catastrophe that neither we nor they can readily identify or explain.

This is the world of director Kiyoshi Kurosawa, a strange purveyor of the horrors of being part of the modern Japanese citizenry. Kurosawa, who's no relation to Akira, can make unsettling music from the rhythms of everyday life. All he needs are two hours.

Not unlike David Lynch, whose idea of what's terrifying also stems from a violent, comical disruption of middle-class comfort, Kurosawa is a radiologist who likes to do diabolical stuff with his X-rays. His movies are weird - there's an evil tree in 1999's "Charisma," a pet jellyfish in 2003's "Bright Future - but their concerns deserve to reach beyond the cult audience they've gotten so far.

"Tokyo Sonata" is as good a chance as any to discover him. It's his most ostensibly accessible film, which is to say that much of what happens to the Sasakis and the characters in their orbit makes a modicum of sense - and much of it is slyly funny.

The man of the house, Ryuhei (Teriyuki Kagawa), loses his middle-management job. Rather than tell his wife, Megumi (Kyoko Koizumi), he continues to suit up and head out every morning. Their teenage son, Takashi (Yu Koyanagi), often doesn't come home until morning and has just announced his intention to join the army. And their fourth-grader, Kenji (Inowaki Kai), wants desperately to play piano.

Reworking a script by Max Mannix, Kurosawa builds a farcical dystopia around these four, especially the couple and their younger son. Mr. Sasaki reluctantly accepts a job doing janitorial work at a mall and lines up alongside the indigent for free lunches. He's not the only guy overdressed for the occasion; a younger, charismatic unemployed executive (Kanji Tsuda), who befriends him, has turned his apocryphal workday into a lifestyle.

Mrs. Sasaki festers in her housewife role, although not for long. Symbolically enough, she's just gotten her driver's license, and goes looking for a car. The sporty little number that catches this meek woman's eyes makes a nifty sight gag.

Men in this world make the money, and they keep the secrets, while the wives have no idea what's going on with their families. To shake things up, Kurosawa throws in a robbery and hostage taking, committed by a masked man (Koji Yakusho) who can't make a competent getaway.

Among other things, "Tokyo Sonata" has Yasujiro Ozu, the director of "Tokyo Story," on its mind. Ozu made masterpieces of formal restraint and melodramatic excess, examining what it means to fulfill your familial role, and what it means to suffer in it. Lots of Kurosawa's quietly framed interior shots resemble both Ozu's stillness and Japanese manga's portent. The business with trains and cars also owes to Ozu. So does that title. "Tokyo Sonata," in so many senses, is about an allergic reaction to the very idea of what it means to be Japanese. The characters misplace their belief in etiquette, politesse, dignity, and propriety - or they struggle to maintain it.

In this film, misplacing that reserve is akin to losing your mind. Being this civilized will drive you crazy. Yet what's ingenious about this sense of horror is not the loss of control but its eerie return - Debussy's "Claire de Lune" has never sounded more ominously soothing. When a friend of Kenji's wants to run the country so he can repeal a helmet law, it feels revolutionary. Here a helmet may as well be another form of mind control.