Comedy or drug drama, 'Air' fails to fly either way 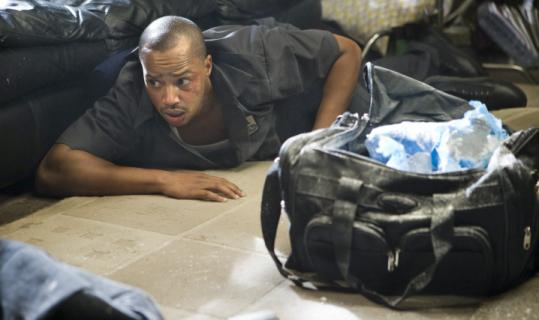 'Next Day Air" comes across in trailers as a lightweight screwball enterprise. Its stars include Donald Faison ("Scrubs"), Mike Epps ("All About the Benjamins"), and Mos Def ("Be Kind Rewind"). It's directed by a guy named Benny Boom.

So why isn't it more fun? Well, to borrow a line from its ad campaign: Think inside the box.

This is a movie that mines its plot from the Stone Age (or is it Stoned Age?) of caper comedies. The trouble begins when bumbling thieves accidentally intercept a shipment of drugs and decide to flip it for a once-in-a-lifetime payday. Chaos, greed, and paranoia ensue. Then the scary drug kingpin shows up to claim his junk. Uh-oh.

Mr. Boom, who is well known as a music-video director ("Scarface: Origins of a Hip Hop Classic") but is making his feature film debut with "Next Day Air," can't decide whether he's creating a comedy, a drama, or a really long 50 Cent video without 50 Cent. Saddled with a schizophrenic, implausible snooze of a screenplay by first-time writer Blair Cobbs, the filmmaker falls back on stylish, supersaturated visuals that feel empty and overdone and seem to justify unflattering comparisons to Guy Ritchie.

When the movie has its comedic face on, it's toggling between the overt silliness of Faison and Def, who play weed-smoking express-mail delivery workers innocently caught up in this mess, and the drier, darker humor of Epps and Wood Harris as the criminally inclined recipients of the misrouted box of cocaine.

There's also a way-over-the-top Latino couple (Cisco Reyes and Yasmin Deliz) who live next to the thieves and must answer to the drug lord (Emilio Rivera) because they were supposed to take delivery of the package.

None of these characters provides more than a smattering of laughs, but Def is the one guy we might like to see more of, if only because his role is small and better executed than it deserves. Debbie Allen also has a mildly funny cameo, but she'd probably appreciate it if we mostly leave her out of this.

On the more serious side, there's Omari Hardwick and Darius McCrary as career criminals who are quickly enlisted to buy and fence the drugs. These thugs have some deep talks when they aren't intimidating and torturing people.

Isn't that what everyone wants in a Mike Epps movie, deep talks?

Or maybe you just want the next "Next Friday." In any case, what you don't want is "Next Day Air."

Janice Page can be reached at jpage@globe.com.