The Limits of Control

An artful dud from Jarmusch 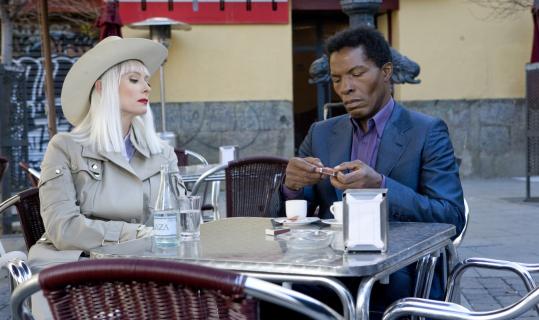 Jim Jarmusch is one of the jewels of independent American filmmaking, a writer-director who has stubbornly and fruitfully pursued his own path for 25 years now. From "Stranger Than Paradise" to "Broken Flowers," he has imagined a fiercely personal world of missed connections and cosmic jokes, of Zen grace and rock 'n' roll cool. He is irreplaceable.

And with "The Limits of Control," he has come up with a dud.

The movie, both hermetically obscure and schematically obvious, follows a hired killer named the Lone Man, played by the African-born French actor Isaach De Bankole with marvelous impassivity and a pretty slick iridescent suit. He's initially contacted by a mysterious Creole (Alex Descas) who sends him on an odyssey through the alleys of Madrid and the arid valleys of Andalucia.

At each stop the Lone Man meets a new contact, each of them eccentric, each played by a signifier of indie-movie cool, each bearing a wooden matchbox containing coded instructions. The most memorable of these are Tilda Swinton, dropping Hitchcock references in white hair and a cowboy hat, and Paz de la Huerta, insolently stark naked in the hero's hotel room and framed to emphasize a derriere nearly equal to Brigitte Bardot's in "Contempt."

Every so often, the Lone Man ducks into Madrid's Museo Nacional, viewing artworks that are mirrored or foreshadowed in the movie's vaporous story line. Jarmusch seems very interested in doubles here, not to mention the history of movies; he glances off the work of Godard, Orson Welles, and Jean-Pierre Melville to no particular end. The film has been shot to a fare-thee-well by the legendary cinematographer Christopher Doyle ("In the Mood for Love"), and each frame is a pristine work of art that could fit neatly into a coffee-table book. You'd probably flip the pages a little faster, though.

That's unfair: This director has always been more interested in stasis and process - in the beauty and mystery of being someplace while going no place fast - than on what's to be found at journey's end (what the natives call "plot"). Even so, the no-places that "The Limits of Control" goes become tedious in their affected emptiness, as do the sophomoric koans Jarmusch sprinkles throughout the script. "The universe has no center and no edges" - that one's dropped more than once, and it's a reasonable description of the movie itself.

When "The Limits of Control" does, at least, arrive somewhere, it's a letdown: Bill Murray as a sort of Dick Cheney in exile, spouting angry platitudes of power. Beyond its more obvious Buddhist implications, the film can be read as the rest of the world finally taking the reins as the aging white men of the Bush years discover "the limits of control." That metaphor seems forced and shallow, though, when set among the avant-spaghetti western posturings leading up to the final scenes.

Still, does that make Bankole's Lone Man an Obama figure? If so, "The Limits of Control" might work as a parable of the first 100 days. At times it feels that long.

THE LIMITS OF CONTROL Written and directed by: Jim Jarmusch

In English, Spanish, and French, with subtitles