A Hub love letter, from a 'Park Bench' 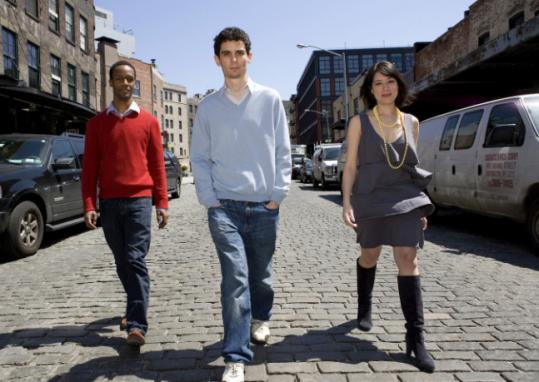 NEW YORK - It had to happen sooner or later. Boston movies are hot. Musicals are back. It was just a matter of time before someone staged an all-singing, all-tap-dancing production number amid the lobster pools at Jasper White's Summer Shack.

But who knew it could be a hit in New York? "Guy and Madeline on a Park Bench," the debut feature film from 24-year-old Harvard graduate Damien Chazelle, is the most-buzzed about movie at the prestigious Tribeca Film Festival. Even before its premiere Thursday night, Time Out NY magazine had labeled it the "don't miss" find of the festival's 85 features. Variety raved that the movie was "a surprise, a delight." Festival programmers scheduled another screening to meet demand. It promptly sold out.

The irony is that "Guy and Madeline" is a gritty, no-budget love letter to Beantown, from its opening shots of Fish Pier to its climactic lovers' confrontation in the parking lot of the Alewife T station. And, yes, the characters sing and dance, at house parties near Harvard Square, alone in the gardens of the Old North Church, atop the steam tables and bar of Cambridge's beloved clam shack. The movie is a kind of tribute to the secret Broadway show we each carry within ourselves, and to a softer, sweet er Boston than movie audiences often see.

"I think Boston," Chazelle says, "especially the way it's been portrayed in movies recently as a burly city, a city of Irish mobsters in Dorchester - there's a whole other side to it, a much quieter, more romantic side."

The praise at Tribeca has left Chazelle, 24, and his young, largely amateur cast in a wary daze of satisfaction. Here they are having their red-carpet moment with a black-and-white 16mm labor of love that doesn't even have a distributor yet - although that will probably change very soon.

"Guy and Madeline on a Park Bench" began as Chazelle's thesis project in Harvard's Visual and Environmental Studies program, but mostly it started as a gamble. What would happen, the filmmaker wondered, if you applied the realistic, handheld camera approach of a John Cassavetes movie to the world of Fred Astaire and Judy Garland.

It shouldn't work but it does. The film separately follows Guy - a Boston jazz trumpeter played by Jason Palmer, 30, himself a New England Conservatory of Music-trained trumpet player and one of the leading lights on the city's music scene - and Madeline (Desiree Garcia). They've split up but can't forget each other, even as Guy embarks on a relationship with the self-involved Elena (Sandha Khin). The characters' emotions play out in instrumental solos and in hushed original songs, written with Chazelle by Justin Hurwitz. At one point a house party erupts into a full-on production number, complete with an exuberant tap solo by local dancer Kelly Kaleta.

"Damien's one of these people who carries with him the history of cinema and jazz music and a love of movies," says his former Harvard professor, Robb Moss. "I remember us all looking at each other after and saying, 'Whoa, that is original.' And that kind of originality is rare."

For Chazelle and his Harvard classmate, producer, and fiancée, Jasmine McGlade, 23, "Guy and Madeline" allowed them to fashion a valentine particular to Boston. "Jasmine and I would spend days and days walking all around neighborhoods looking for locations for musical numbers," the director says. "I wanted the place to be a character as well."

Sitting on the patio of a restaurant in Manhattan's meatpacking district, Chazelle, McGlade, and their leading duo are still in a mild state of shock from the film's premiere the night before. Palmer, who had never acted before and prefers to take refuge behind his horn, found the red carpet surreal. "I can take one or two camera flashes, but a dozen?" he says.

Garcia, now a film studies professor at Ursinus College in Collegeville, Pa., worries about "walking into my class on Monday and having my students say, 'I just Googled you and you're wearing a bowler hat in Elle magazine.' " (Indeed, there was a photo shoot, and she did go the full Bob Fosse.)

Chazelle, though, seems privately vindicated by the film's early praise and happy to talk about getting the city to play itself.

He and McGlade flew under the film-permit radar, operating under the film-school premise that, in Chazelle's words, "keep shooting until they kick you out." A scene of Madeline having her hair done was improvised at the Tocco Classico salon near Porter Square, with proprietor Bridgette Guarino clucking over the actress like a mother hen. Local tap-dancing teacher Julia Boynton led the filmmakers to Garcia, Kaleta, and the film's other hoofers.

Street corner flower-sellers and denizens of Wally's Jazz Cafe in the South End were enlisted to appear as themselves. "We loved using Boston people whenever possible," says McGlade.

"Guy and Madeline" was 2 1/2 years in the making, and the cast and crew have since scattered. Garcia, whose Boston University film studies thesis, appropriately, was on ethnicity in the classic Hollywood musical, has gone back to academia, while Palmer has held on to his weekend stint leading his band at Wally's, as well as teaching music appreciation and band at Boston's Mission Hill School.

Chazelle and McGlade have relocated to Los Angeles, where they're working on scripts, hoping to get one of them made, and looking forward to their wedding next June. The unexpected success of their first movie bodes well for keeping their oddball vision intact, but Chazelle says he would welcome anything the studios care to offer him. Even "Iron Man 3?" he's asked.

"I'd jump on board in a heartbeat!" he responds with the idealism of the young and the talented. "To me, some of the best movies ever made came from that cookie-cutter system, where directors like Raoul Walsh and Anthony Mann and Leo McCarey were hired on contract and didn't even write the script. I'm very interested in burrowing my way into the Hollywood system as much as I can, trying to inject my personality into stuff that might seem impersonal.

"And at the end of the day," Chazelle adds, "you can always just go make a movie. It's so easy." It seems to be working for him so far.