Temp from hell? Been there, done that (better). 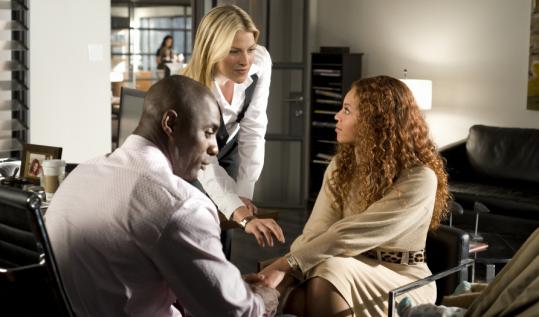 Ladies, I think we've all been here. Some woman at your man's work thinks he belongs to her. She hatches a deranged plot to break you up so she can (legally) have him. He tells you nothing happened. You throw him out. "And where should I go?," he asks. "To hell," you say. He woos you back, but she's still in the picture - OK, she's in your house. And now you have to hurt her.

"Obsessed," which opened yesterday but was kept from critics, dutifully revises the "blank from hell" genre which gave the world ridiculous, misogynist thrillers in the mid-1980s and early 1990s. In "Obsessed," the "blank" is a temp - not to be confused with the temp-from-hell Lara Flynn Boyle had a good time playing in 1993's "The Temp." This time it's Ali Larter, a generically pretty blonde in a role that exists only to make some audiences talk back to the screen. And talk they will. After all, Beyoncé Knowles plays the wronged wife.

Her name is Sharon, and she's married a scrumptious-looking finance executive named Derek (Idris Elba). As Lisa, his assistant, Larter goes from flirtatious to actionable in about five seconds: She positions herself under the mistletoe at the office holiday party, listens in on his phone calls, and rubs all over him in a men's room stall. After hopping into his Mercedes, she rips open a rain jacket that reveals tuxedo-print skivvies. (Ladies, I'm afraid I've been there before, too.)

All this precedes Lisa's suicide and baby-napping attempts. Through it all Larter licks her lips, flings her hair, and smiles with devilish abandon. The temp-from-hell, maybe. Attack of the killer Lakers Girl, for sure.

Despite its provocative potential, "Obsessed" basically plays it safe. The obvious racial buttons are never pushed - Derek is black, Lisa white, and Beyoncé Beyoncé. And Derek never comes close to being, um, tempted. We know he's a saint, even if his saintliness is understandable. As Jill Scott once sang: He's got something better at home.

As that something better, Beyoncé wears what looks like one of Janet Jackson's old weaves and waits for the big confrontation, which is a showcase more for her physical fitness than anything else.

"Obsessed" happily toes the genre's sexist line. Woman's only career is man - getting him, keeping him, slipping him a roofie. Dodging weaponized floor lamps and planks of wood, Beyoncé is ferocious all the same. But watching this movie is like sitting through an eternal rehash of the vengeful feelings she's already covered so vividly in song. Take 2006's "Ring the Alarm," in which Beyoncé more or less tells a man she'd sooner go to jail than see him with someone else. "I done put in a call/ Time to ring the alarm/ 'Cause you ain't never seen a fire like the one I'm gone cause."

That, folks, is obsessed.

PG-13 (sexual material including some suggestive dialogue, some violence and thematic content)