Boldly going where Trekkies have gone before 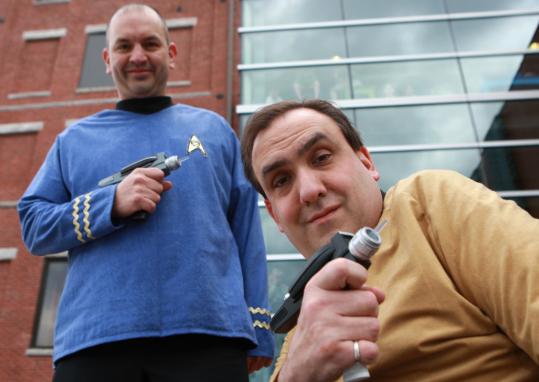 A $160 million outer-space epic stocked with beloved characters and hunky young actors. An A-list director with multimedia cred. A buzz loud enough to be heard in the Romulan Star Empire.

What could possibly go wrong?

Not much, at least if you're Paramount Pictures, the studio that is releasing J.J. Abrams's "Star Trek" movie on May 8. Abrams, whose credits include the hit television series "Lost," is taking over a franchise in dire need of an energy boost, as even hard-core Trekkies acknowledge. Early signs point to an intergalactic smash, too. One British critic who saw the film last week called it "a rollicking space adventure that makes you fall in love with the original series all over again."

Still, if you're as passionate a fan as Jerome Connor of Chelmsford is, you're a wee bit apprehensive. You worry that Abrams's film, cast as a prequel to the original 1960s television series, plays fast and loose - too loose, maybe - with the look, characters, and back story of "Star Trek." You wonder if this version, the first film in nearly 20 years to feature characters from the original series, tries to weave in too many plot twists, as "Lost" has sometimes been criticized for doing. Or if it sacrifices the subtle humor of the original for big-bang explosions and such.

"You've got an established canon here," says Connor, 44, a longtime member of a local Trek fan club. "You have a terminology and philosophy that have impregnated society. I have no problem with a reboot, but it has to be faithful to the original."

Besides "Lost," on which he served as co-creator, writer, and executive producer, Abrams helped create the television series "Alias" and has written, produced, or directed several feature films, among them "Cloverfield" and "Mission: Impossible III." With Star Trek, which has spawned five separate series and 10 feature films over its 43-year history - plus novels, comic books, games, fan-made productions, even a Las Vegas theme-park venue - the stakes are that much higher when it comes to meeting fans' expectations, according to Connor.

Online, the prerelease chatter has been intense. One poster to the website www.trekmovie.com asks whether fans really need "a mirror-universe reboot prequel" when a "proper sequel" would suffice. "Even though I haven't seen it," another writes, "I KNOW it is bad because it is not a replicate [sic] of the cheap sets of the 60s. I KNOW it is bad because it doesn't follow my strict understanding of canon."

Doug Mayo, 49, head of a Greenfield-based Star Trek fan club, says the biggest complaint he has heard concerns the design of Captain James T. Kirk and company's spacecraft. If it is really supposed to evoke the original USS Enterprise, it should probably look clunkier than it does in trailers for the movie, says Mayo, who is nevertheless eager to see the finished product.

"I'm really excited about seeing young actors in these roles," Mayo says, "how these new faces put a new twist on stuff. I'm not one to say, 'Boy, they better follow canon, or I won't watch it.' "

That there's earnest discussion of a Star Trek canon is testament to the franchise's enduring power. What is now known as "Star Trek: The Original Series" (ST:TOS) debuted in 1966 and ran for three more seasons, 79 episodes in all, before falling victim to poor ratings.

Ratings alone did not begin to tell the story of ST:TOS's impact on popular culture, however. Blending elements of Wild West shoot-em-ups with '60s-era themes like free love and misbegotten warfare (read: Vietnam), the series trafficked in allegory and New Age philosophy as much as it did menacing aliens and beam-me-up technology. William Shatner (Kirk) and Leonard Nimoy (Mr. Spock) headed a cast that attained cult-hero status as the series prospered in syndication during the '70s and beyond.

Shatner and Nimoy also starred in and occasionally directed big-screen installments of Star Trek in the 1970s and '80s, joined by other original cast members. To a large extent these movies have been unmemorable. The last one, 2002's "Star Trek: Nemesis," featured the cast from another incarnation of the series, "Star Trek: The Next Generation," and bombed at the box office.

Abrams, who admits to aiming his film at both Trekkies and general audiences, shrewdly cast hot young actors Chris Pine ("Just My Luck"), Zachary Quinto (""), Karl Urban ("Lord of the Rings"), and Zoe Saldana in lead roles. Nimoy, now 78, has a role as an older, time traveling Spock. The new film is reportedly a coming-of-age story centered on Kirk's maturation from brash young space cowboy to seasoned starship commander.

Boston College English professor Judith Wilt, who teaches a course on science fiction and counts herself a Star Trek fan, says she barely remembers previous Star Trek films, yet looks forward to this one, in part because of the prequel angle.

"I'll be one of the first in line to see how the new scenes sew into what we already know." Wilt says. "It's hard creating something new and matching it to something familiar."

Therein lies another potential pitfall for the Abrams film, says Paul Fest, a Trekkie with high hopes for the new "Star Trek."

"I want to be sure Abrams doesn't make it too complicated," says Fest, 38, who met his wife at a Star Trek convention. "Here's my take on it, though. It's science fiction. As long as it's written and acted well and not all special effects, it's OK. I tell friends who are nervous about it: 'Calm down. It's a movie.' "

It could also be a potent recruiting tool, according to Fest, who notes that Star Trek fan club membership has declined from a high of 8,000 worldwide to less than half that now.

Studios and theater owners once marginalized or ignored Trekkies, he says. But this time around they are reaching out to a built-in audience with the curiosity, loyalty, and money to support a franchise that could use some new blood.

"I've already got two new members signed up for my club and four more interested in joining," Fest says. "And yes, I'll be going to see [the movie] in my Kirk shirt."

A look at the new actors who will be stepping up into the classic "Star Trek" roles.
Your comment is subject to the rules of our Posting Policy
This comment may appear on your public profile. Public Profile FAQ