A big-screen view of 'Earth' 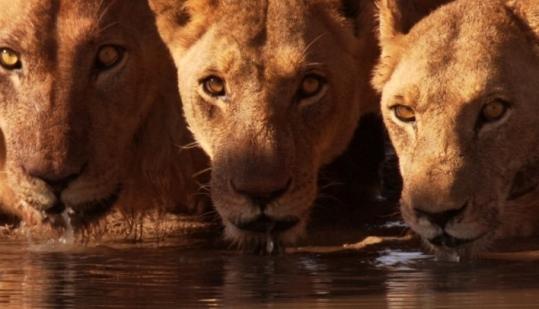 Lions in the Kalahari Desert wait for dark to fall before they hunt elephants in the movie ''Earth.'' (Disney via Associated Press)
By Janice Page Globe Correspondent / April 22, 2009
Text size – +

It feels like a long time ago that the BBC first unveiled its "Planet Earth" documentary series - a stunning achievement five years in the making, with then-groundbreaking nature footage captured by more than 70 photographers fanned out across 62 countries. Since that 2006 debut in the UK, the series has been made available for frequent viewing on American cable television (where Sigourney Weaver replaced original narrator David Attenborough) and as a box set of discs complete with popular behind-the-scenes diaries. Now, just in time for Earth Day 2009, comes "Earth," the big-screen movie version of all that expensive camera work, repackaged by Disney under its new Disneynature label, with narration by James Earl Jones.

This "Earth" doesn't really have anything new to say, but it does present some newly entertaining ways of saying it.

Where the TV series was comprehensive and mostly serious, the movie is far more compact, of course, and considerably lighter in tone. Still, the big-screen journey feels in some ways more urgent, hopping quickly from shrinking polar icebergs to scorching desert sands, lush tropical rain forests, and thundering mountain waterfalls. Plenty of menacing predators roam, but blood and carnage have been edited to a G-rated minimum, which still might prove disturbing to youngsters, even if they're spared the graphic conclusion of lions gang tackling an elephant at night.

Jones's rich, familiar voice slides effortlessly between ominous and playful narration as the film treks all around the globe to document dozens of wild animal species including exotic birds, monkeys, whales, and cats. It's easy to see why some stories and moments made the cut: The poignant tale of a struggling polar bear family plays exceptionally well on the big screen, right from the opening shots of adorable cubs slip-sliding along a steep arctic slope. And can anyone be unimpressed by a great white shark leaping high above the water to snag a seal, or aerial footage of a massive caribou migration with hungry wolves in hot pursuit?

Directors Alastair Fothergill (a creative force behind "The Blue Planet," "Deep Blue," and "Planet Earth") and Mark Linfield aren't out to shake things up too much - in fact, "Earth" borrows heavily from the (Linfield directed) "Pole to Pole" opening episode of "Planet Earth." Any previously unseen footage seems like a mere footnote to the spectacular images that made the series such a hit.

The message is, as always: Respect the fragile ecosystems of this vast world we merely share in.

If even a few more people are persuaded by James Earl Jones and the power of cinema, this was a film worth making.

Disneynature has pledged to plant a tree for each ticket sold during the film's opening week. Janice Page can be reached at jpage@globe.com. For more on movies, go to www.boston.com/ae/movies/blog.