He sees 'The Emperor' and his clothes 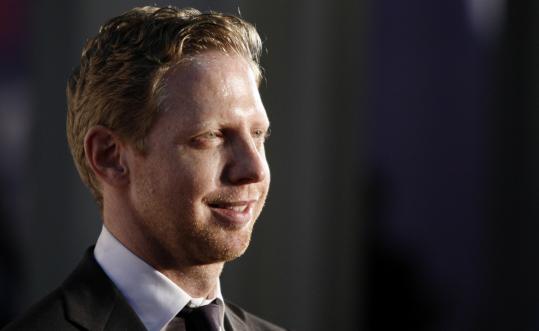 "I think the headline for your article could be 'Valentino: Behind the Tan,' " says Matt Tyrnauer, director of "Valentino: The Last Emperor."

"Before I met him, that's all I could see as well," Tyrnauer says. "But once you get to know Valentino, I think you come away with a very different idea of who this guy is."

As a special correspondent for Vanity Fair, Tyrnauer wrote a profile on the designer and fashion icon five years ago. Inspired by what he found researching his story, he made a documentary to tell the story of Valentino Garavani and his long-time business and romantic partner Giancarlo Giammetti. For two years leading up to Valentino's retirement, Tyrnauer and his film crew followed the designer.

Tyrnauer is in Boston this weekend to attend screenings of "Valentino: The Last Emperor" at the Coolidge Corner Theatre. He was there yesterday and will be again today. The Globe spoke with the filmmaker by phone.

Q. Obviously Valentino was open to the idea of the documentary, but I'm wondering if the two of you had different ideas about how much access you should have?

A. Access wasn't really the problem because they weren't that fussy about us being around. It was more the idea that Valentino is a little high maintenance and a bit of a diva. We were in the inner sanctum when he was doing the couture. When things got difficult, the first people he blamed usually was the camera crew. We became the scapegoats. A lot of people never see these things because Valentino was very careful with the press for 50 years. He was very guarded.

Q. After being guarded for so long, why did he let you into his inner sanctum?

A. I had done this Vanity Fair article on him, and I was really the first to write in depth about the Valentino/Giancarlo relationship. They opened up to me about it. They hadn't spoken publicly about the fact that they had started as boyfriends and built the business. I wanted to make a movie about that relationship.

Q. I'm wondering if it was sometimes difficult to get Valentino to open up, because I get the sense that Giancarlo has always been his protector.

A. That's it exactly. The key to the film is the relationship. It's a love story, and you see what Giancarlo did for Valentino. He allowed Valentino to live in a world apart. There's this bubble that's built around him and protected by Giancarlo. Valentino lives in that bubble and he's completely cut off.

Q. Were they OK with the final cut of the film?

A. No, they hated it. I kept it from them as long as I could. I showed it to them in a screening room in London. Frankly, they freaked out. They did not like the movie at all.

Q. Did they ever come around?

A. The movie was embraced in Venice at the film festival. It got a very prolonged standing ovation and the press coverage was overwhelming. They were so swept away by that that they embraced the movie that evening in Venice.