'Crank' in need of a heart 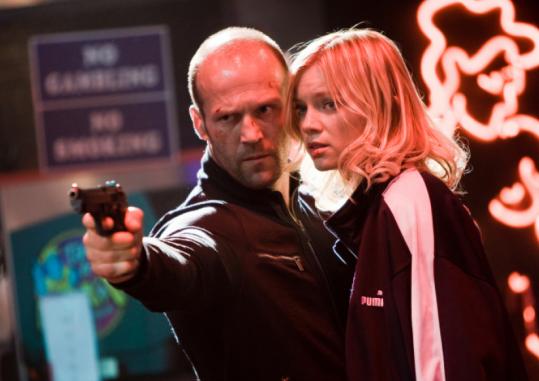 Wait, didn't we see nail-spitting hero Chev Chelios (Jason Statham) die at the end of "Crank"? Falls from helicopters onto pavement tend to be conclusive in movies, but the film's unasked-for sequel is actually more of a video game, and a clever, proudly anti-social video game at that. Imagine some very smart people setting out to make a very naughty action film and shooting themselves in the foot. Voila: "Crank: High Voltage."

Chelios having worked the lethal poison out of his system, the new movie needs a fresh heart-stopper and it's literal: The hero's ticker has been transplanted into the body of an aged Chinese gangster (David Carradine, essentially playing Grasshopper from "Kung Fu" gone bad) and Chelios has been left with an artificial model with an approaching expiration date. Since he loses his external battery early in the mayhem, much of the comedy here comes from the frenzied search for power sources: jumper cables, doggie shock collars, car lighters.

Written and directed by the team of Mark Neveldine and Brian Taylor (they go by Neveldine/Taylor) in a lapel-grabbing aggro style derived from Red Bull commercials, "Crank: High Voltage" is pulverizingly bloody, relentlessly crude, and often weirdly playful. One minute a Mexican gangster is cutting his own nipples off - in close-up, thanks for that - but the next we're into a bizarre talk-show flashback or a therapy session with an extra who survived the first film.

What spoils the bad-boy high spirits is the film's rampant misogyny, which isn't subversive or witty but merely painfully middle-school. Every woman here is a stripper or a whore - sorry, ho - and that includes the hero's girlfriend Eve (Amy Smart), who gets to have public sex with him again in an effort to recharge his heart. Chinese actress Bai Ling delivers a two-fer: Her portrayal of a hyperactive hooker is massively sexist and racist. Can someone remind me what we ever saw in this actress?

Statham plows through the movie with his usual dry sense of attack-dog purpose, but the "Crank" series is sillier and more disposable than the "Transporter" movies, and he knows it. Or maybe he's embarrassed to be in the kind of film where a stripper is shot in the breast and spews silicone. At one point, the actor stares into the camera and extends his middle finger. I hope that's for the directors, since the movie's long since flipped us off.