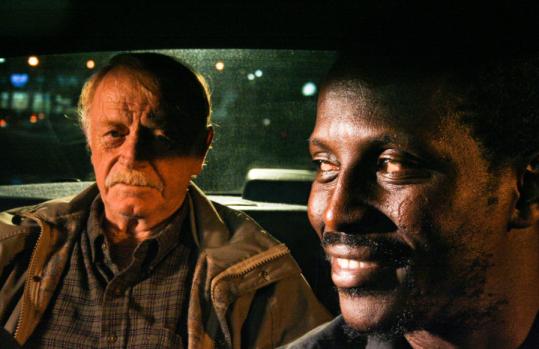 Has anyone in the movies ever been as happy to get a phone call as the man known, in "Goodbye Solo," as Solo? Whenever his cell goes off, not only does Solo (Souléymane Sy Savané) answer right away, he does so as if the caller, occasionally a codger named William (Red West), were the most important man on earth - really, William is just one of the saddest.

Solo drives a taxicab in Winston-Salem, N.C. He's come to the United States from Senegal and has a joy for life that feels superhuman. William is at a low point when he gets into Solo's taxi. His ruddy, haggard complexion suggests years spent with a bottle. On his first ride, he'd like a lift to the movies. Then, later in the month, he books a one-way trip to the Blowing Rock, a tourist attraction about 90 minutes away.

The average driver would accept the promise of the $1,000 fare and come back on the specified date. Solo, being anything but average, opts to pry and deduces, without much resistance from William, that his passenger plans to die.

It sounds like the old unstoppable-force-meets-immovable-object trick. Ramin Bahrani's "Goodbye Solo" has the trappings of such a story, but, mercifully, none of the follow-through.

After the opening minutes, Bahrani liberates his movie from the constraints of the car and dispels fears of some sort of "Driving Miss Daisy" reconsideration. Miss Daisy would never have sat by while Hoke drove a drug dealer to his drop-offs, as William does here. Bahrani is perfectly aware that moviegoers have hearts. He just refuses to assault them with a sledgehammer.

However, in putting this story in motion, he continues to play with fire. William checks into a motel, and before long Solo has moved himself in, too, after some trouble with his wife, Quiera (Carmen Leyva). She's a sensible Mexican woman with a bright 10-year-old daughter (Diana Frano Galindo) and a new baby, with Solo, on the way. You wait for a sitcom, but it never comes. Instead, the film becomes not so much a stock study in character as a portrait of personalities.

The way Savané plays him, Solo is relentlessly charming. Just listen to him sweet talk the taxi dispatcher - she's just a wonderful voice behind a sheet glass. She denies him both a dinner-date and preferential treatment with her assignments (he wants her to throw all William's calls his way).

William, meanwhile, is a closed book. The more Solo tries to open him up, the angrier he gets. And yet they share wonder over the magic of camera phones and William expresses enthusiasm for the music of Hank Williams. If there's a human fault with Solo, it's that he can't leave well enough alone. Whatever loneliness or misery he's endured in his past has become unbearable for him to see in his fellow man.

This is Bahrani's third film (after "Man Push Cart" and "Chop Shop"), and all three ensconce us in the lives of people we see in the world but don't often regard. He doesn't ennoble his characters to such a degree that they lose their humanity. For a movie critic, one of the pleasures of Bahrani's approach to moviemaking - by sensibility, he's a realist - is the opportunity to write about feelings and behavior, to continue to wonder about the characters' inner lives weeks after leaving the movie theater.

Bahrani has written each of his movies with Bahareh Azimi, though the characters seem to exist independent of a script or style. Solo's obsession with rerouting William's grim plans seems inextricable from his wish to become an airline flight attendant, a job characterized by safety, service, and smiling. William's death would amount to a kind of failure.

In "Goodbye Solo," Bahrani appears to have been thinking about Abbas Kiarostami's more formally rigorous 1997 film "A Taste of Cherry" and how to tell its tale of suicide and the people who object to it with as much humanity but less theological or moral resistance. With the Kiarostami, "Goodbye Solo" would make a fine triple-bill with Mike Leigh's "Happy Go Lucky." All three films involve the clash of outlooks under the roof of a car. Leigh's film is more aggressive in its argument for bliss. Bahrani appears less interested in taking an absolute position. But when life calls, Solo will be there to pick up on the first ring.

Written by: Bahrani and Bahareh Azimi