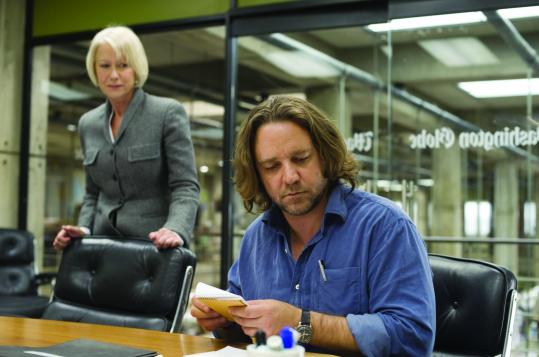 Poor Stephen Collins. Not the veteran "Seventh Heaven" actor, but the United States congressman from Pennsylvania, whose woes are at the center of "State of Play," an enjoyably trashy thriller that opens today. Representative Collins (Ben Affleck) has been having an affair with a pretty young staffer who turns up dead, minutes before he's scheduled to lead hearings probing possible corruption by an American defense contractor in Iraq. She had been doing research on the matter but, conveniently, fell in front of a speeding D.C. subway.

No one seems to know whether she jumped or was pushed. But the crazy camerawork and screeching on the soundtrack don't leave much to the imagination: Freddy Krueger did it. Regardless, Collins is in trouble. The world is now talking about his extramarital love instead of the nasty contractor. And his beautiful, beleaguered wife (Robin Wright Penn) has to stand by him during the press conference.

The only person able to help is Cal McCaffrey (Russell Crowe), Collins's college roommate who happens to be a big-deal investigative reporter for the Washington Globe. For some reason, it's Cal who advises the congressman on how to spin this story in his favor. For instance, put the mistress's last lovey-dovey camera-phone message on YouTube. Why pay for Capitol staffers at all?

Cal has devoted his career to getting at the truth - sorry, The Truth. This time he puts his career on the line to get at what Stephen Colbert might refer to as the ultimate truthiness. Of course, Cal's intimate connection to Mr. and Mrs. Collins amounts to what's typically called a conflict of interest. But Cal's imperious English editor (Helen Mirren) doesn't seem to dwell on that. She's under pressure from the new corporate ownership to print more sizzling stories. Furthermore, The Truth doesn't care about such ethical dilemmas. Neither does this brand of overripe, over-plotted suspense.

"State of Play" has been condensed and recontextualized from a nearly six-hour 2003 BBC miniseries. A sheen of British toniness increased the shock value of the tawdrier developments (how could someone with such crisp diction do that?). The American version uses a screenplay patched together from the contributions of the credited writers - Tony Gilroy ("Michael Clayton," "Duplicity"), Matthew Michael Carnahan ("Lions for Lambs," "The Kingdom"), and Billy Ray ("Shattered Glass," "Breach"). The result is like an expensive video-store shelf devoted to high-level venality.

If the film has a hero, in many ways it's the print news industry. The movie opens with papers dashing through the presses and closes with a shot of a delivery truck. It's a romance between Hollywood and the Fourth Estate that's almost as old as film itself. Newspapers, the movie argues, are the nasty-old government's watchdog. Without them, it's all Glenn Beck all the time.

So "State of Play" moves between the dais and the dumpster, railing against government corruption and corporate monopolies while putting the veteran newspaperman and his imperiled industry on a timely pedestal. While Collins presses on with his hearings, Cal begins to dig into the dead girl's past, meanwhile turning up unsavory revelations about her and his old friend. He does so armed with the editor-mandated assistance of Della Frye (Rachel McAdams), who writes the paper's saucy Capitol Hill blog but has a thing or two to learn about "real reporting." And learn, she will.

Director Kevin MacDonald keeps Cal and Della moving from one scene of danger to another with the pace of an airport thriller. Were "State of Play" an actual paperback, the only reason to put it down would be to wipe the grease off your hands. A parking lot foot chase between Cal and a relentless contract killer produces the amusing sight of Crowe holding on to a speeding Volvo for dear life. It's pedestrian but fun, despite itself. You could say the same about the movie.

The material better suits MacDonald's slickness than his previous stab at goosing politics for chills, 2006's Idi Amin horror-show "The Last King of Scotland." The pulpy glee in "State of Play" comes at the expense of a few fictitious dead people as opposed to the slaughter of thousands in "Scotland." The tastelessness is palatable.

A lot of what we see in "State of Play" is comically on loan from elsewhere - a junkie in possession of key information looks like a refugee from American remakes of Asian horror movies, and the killer could double as an avatar from the first-person shooter game of your choice. The overall lack of subtlety is a riot - there's even a cautionary production of "Peter and the Wolf" happening in the background during one journalist-politician showdown at a Beltway gala.

Still, it's a pleasure watching this cast make the most of the material - Harry J. Lennix as a detective (and incidental ringer for Barack Obama); a hilarious Jason Bateman as a druggy, cheeseball publicist; Jeff Daniels sneering on the Hill; Viola Davis in the coroner's office; David Harbour as an intimidating former soldier; and Barry Shabaka Henley, Michael Weston, and Josh Mostel in the Washington Globe's sleek open-space newsroom. (To whom it may concern: Whatever happens to the Boston Globe, I vote we pack up and move to these offices.)

Affleck, speaking in a fine Philadelphia accent, is very good in the film's silliest role. Tubby and hairy again, Crowe does his best with the righteousness he has to play. McAdams makes a lot of cute faces and does a great deal of obvious snooping. When I got tired of hearing her called Della, I pretended people were saying "Nancy Drew," instead. Even so, it's actually fun watching the journalists put this story together. There's a relish in the actors' faces that gets at the thrill both of breaking news and investigating it.

Through it all, there is Mirren giving everybody hell and putting exasperated comedy into such basic activities as punching the numbers on a telephone. Her character's loose journalism standards are worrisome, and she doesn't appear to do any actual editing - no ones does, for that matter. If this performance can't save newspapers, it certainly makes them seem like the most entertaining place in the world to work.