'Hannah' is still keeping a secret 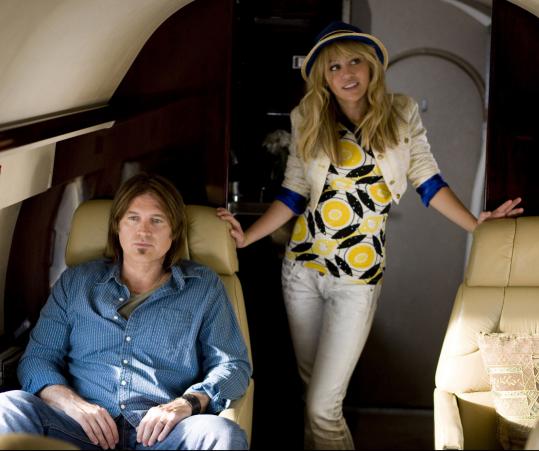 It's an unenviable position. Hannah Montana is the most famous underage pop star in America. But the girl pretending to be her - Miley Cyrus as Miley Stewart - is living a lie. The lie has made Miley, the actor and the character, rich and popular. It has made her washed-up country-singer dad look shrewd. It's also made her exhausted. She could use her Disney Channel sitcom to end her double life. But the Disney employees charged with the direction of her future wisely thought she should solve this identity crisis where many a teenage starlet before her has: the movies.

"Hannah Montana: The Movie" has performance numbers - the first one fancifully blurs the line between a live Hannah concert and a music video - flat melodrama, and such guest stars as Rascal Flatts and Taylor Swift, as themselves. Peter Chelsom is credited as the director, but the movie's slapstick, musical numbers, and montages appear to have directed themselves - there is an elegant, if oppressively metaphorical sequence staged in a revolving door.

The whole thing explores whether Miley, who's running from a tabloid exposé, exasperating her publicist (Vanessa Williams), and wrestling Tyra Banks for shoes, can afford to bare her true self to the world. Does she at last remove Hannah's blond wig or not? And how much longer can she keep up this charade until some stranger Tweets the truth?

While she figures that out, her father, Robby (Billy Ray Cyrus), has dragged her from Beverly Hills to her ancestral Tennessee home. There, Miley flips the country script ("If you don't mind, I'm gonna add some hip-hop to this hoedown"), asks rhetorical R&B questions ("Where my girls at?"), and sparks an epic line dance.

Looking on are a smitten farm boy (Lucas Till) who rides a horse with pornographic suggestiveness, and no-nonsense Aunt Ruby (Margo Martindale), who's fighting to save her town from a shopping mall and reminding Miley to be true to her roots.

But wait. What roots are those? Follicular, familial, or financial? The goals of "Hannah Montana: The Movie" are threefold. Put large images to new Hannah songs, assure us that the empire is just fine, and dominate the box office. (To that end, moviegoers have been promised that Cyrus "will surprise unsuspecting audiences" on opening weekend.) So Miley may vacillate, but for now her indentured servitude to Disney continues. The image that comes to mind is Princess Leia chained to Jabba the Hutt, but that's probably just me.

After she sings a pretty liberation anthem ("The Climb"), someone yells, "Put the wig back on! You'll never have a normal life if you don't." The depressed look on Cyrus's face breaks your heart. Truculence is OK. But true rebellion will have to wait for a significant slump in sales.

Miley, Billy Ray, and other stars attended the premiere of "Hannah Montana: The Movie."