Growing up protective of an autistic brother 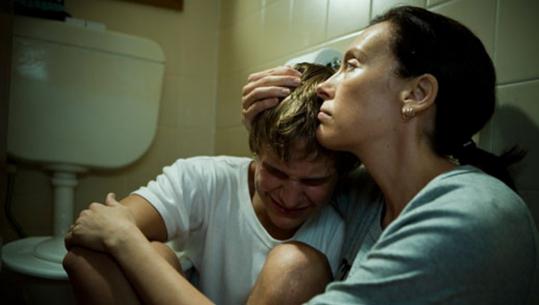 It's a blazing hot day in 1990 Australia, and the Mollisons are moving into a new house again. They're an army family: dad Simon (Erik Thomson), pregnant mum Maggie (Toni Collette), gangly 15-year-old son Tom (Rhys Wakefield) all carrying cartons into the house. On the front lawn sits older brother Charlie (Luke Ford), banging a wooden spoon and laughing hysterically. The neighbors stare without embarrassment. Most of them have never seen an autistic person before.

"The Black Balloon" treads somewhat familiar ground - especially if you've ever seen 1993's "What's Eating Gilbert Grape" with its similar drama of a young man carrying the cross of a severely challenged sibling and learning, after much frustration, to set it down. Writer-director Elissa Down has her own things to say, though, and her own way of saying them; sister to two autistic brothers herself, she has made a number of short films (and one feature, 2001's "Pink Pyjamas") that deal gently yet lucidly with the troubles of growing up.

So "The Black Balloon" looks at the world through Tom's eyes, sharing his love for and mortification with the very high-maintenance Charlie, even as it acknowledges their parents' grace under pressure. Maggie is one of those do-it-all types who holds her family together with love and combat skills; says Simon to his son, "Your mum reckons we got Charlie because we're capable. Because we can handle him."

Fair enough, but where does that leave a teenage boy trying to fit in while not standing out? It's tough enough that Tom has to ride to school on "the spastic bus," as his nastier classmates call it. Much worse is having to chase a giddy, underwear-clad Charlie through the neighborhood until Charlie ends up invading a stranger's home so he can use the toilet. While someone is taking a shower. That someone being Jackie (Gemma Ward), the prettiest girl in Tom's swimming class.

It's a mark of Down's faith in female strength that Jackie takes the incident in stride. Actually, as played by the low-voiced and eerily lovely Ward (she was in the recent "The Strangers," so maybe she knows from home invasion), Jackie's rather too good to be true. One of the movie's points, though, is that such people do exist and the men of this world are lucky to lean on them.

"The Black Balloon" hardly sugarcoats the reality of living with autism - at the end of some scenes we're as exhausted as the characters - and it manages to humanize Charlie without coming down with the cutes. It wasn't until after the movie that I realized I'd seen Ford before, as Brendan Fraser's son in the most recent "Mummy" sequel. The best thing to be said about his performance here is that you don't realize it is a performance. It is, though, and an excellent one; every so often, Ford gives us heartbreaking glimpses of the sweet, funny boy imprisoned behind a wall of misfiring neurons.

The director's achievement is equally fine. Structurally and cinematically, "The Black Balloon" sticks to the coming-of-age basics, but Down has a gift for conveying time and place. You feel the weather here and the heat, the languid eroticism of young people lazing in a river, the anguish of adolescent chagrin. Down has mined her memories for a bittersweet ode to everyday survival.

THE BLACK BALLOON Directed by: Elissa Down

Written by: Down and Jimmy the Exploder