From lost in thought to true dialogue 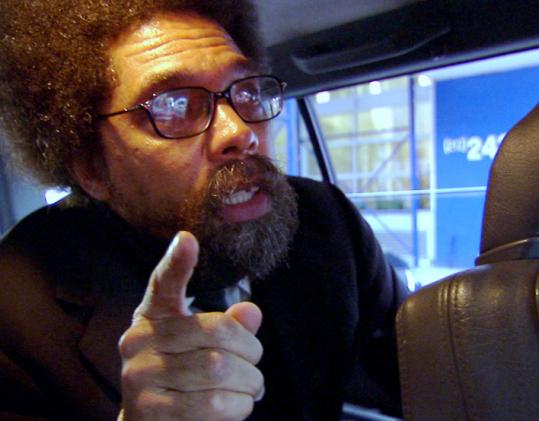 There is a wonderful premise guiding "Examined Life," a new documentary by Astra Taylor, and it's a straightforward one: Let a handful of modern philosophers separately philosophize about the state of the world while traveling through it. So rock-star thinkers - including Cornel West, Slavoj Zizek, Judith Butler, and Peter Singer - expound as they make their away around, say, New York City.

It's the Aristotle way: Walking plus talking produces ideas.

But a glitch becomes apparent in the opening minutes. The movie's thinkers rarely leave their thought bubbles. West never leaves what appears to be Taylor's Volvo. Michael Hardt, the political philosopher, rows a boat along the Turtle Pond in Central Park. The cultural theorist Kwame Anthony Appiah wanders around Charles de Gaulle airport. Excusing the ebullient Zizek, who hangs out at a London garbage dump, they're a self-serious lot. (Taylor's previous film, 2005's "Zizek," was all about him.) The feminist deconstructionist Avital Ronell walks through Washington Square Park offering declamations like a caricature of a gassy intellectual, explaining that "the minute you know The Other" - oh no, not The Other! - "you are ready to kill it."

Ronell is either extravagantly humorless or cryptically funny, saying that "even boredom as an offshoot of melancholy would interest me as a response to these dazzling utterances that we're producing" - by "we" she means herself. As she speaks - sort of to Taylor, sort of to the nimble cinematographer John M. Tran, sort of to us, but really to no one in particular - I found myself more drawn to the people arrayed on the benches Ronell passes. A young man, lying down, combs his hair. A tubby old guy with cheap headphones - you know him; he's in every park - looks on in mild befuddlement. Another sad-looking gentleman pays the whole production no mind.

Over the course of the film's 88-minutes, Taylor cuts away to what's happening around her subjects (the unexamined life, I suppose). Perhaps she's attempting to make connections the thinkers don't. Perhaps she's making commentary (why else cut to a woman in a head scarf while the likable legal ethicist Martha Nussbaum considers how the Social Contract excludes women and the disabled?). Maybe the cutaways and montages are just meant to jazz things up. Either way, you wish one of these people would do something spontaneous, like talk to a human being. Singer, the applied-ethics crusader, walks up Fifth Avenue wondering whether we can make our academic studies more applicable to the issues of the day. I don't know, can we? How nice would it have been for him to stop someone and ask?

Often what you're forced to think about are not higher matters but middling ones, like the difference between talk and pontification. It might have been more enlightening - not to mention visually stimulating - to see these women and men apply their ideas (or try to, anyway) to someone's life, to reach out, rather merely peer out? You feel what's missing from "Examined Life," whose title comes from Plato (an unexamined one is not worth living, he said) when the movie heads to San Francisco for its only true dialogue. Judith Butler, the third-wave feminist, queer theorist, and much more, tours the Mission neighborhood with Taylor's sister Sunaura, an artist and political activist who gets around in a motorized wheelchair.

They discuss the psychological and social oppression of being disabled, what it means for them to "take a walk" (both in theory and right then), and what we mean by "disability." It's a beautiful, exhilarating conversation, one that Taylor's filmmaking complements with inspiring watchfulness. Their talk of walking makes you notice Butler's gait (it's odd), and the "walk" itself lends the philosophy a practical end - they go shopping for a used sweater.

As these two meet the world around them, the ideas percolate so that Butler doesn't have to rely on her greatest hits, so to speak, repackaging and regurgitating already published ideas as some of her counterparts do. This passage simultaneously brings together nearly all of the movie's ideas and exposes the discursive limitations of what preceded it. Everyone is here intensely engagé but only loosely engaged.