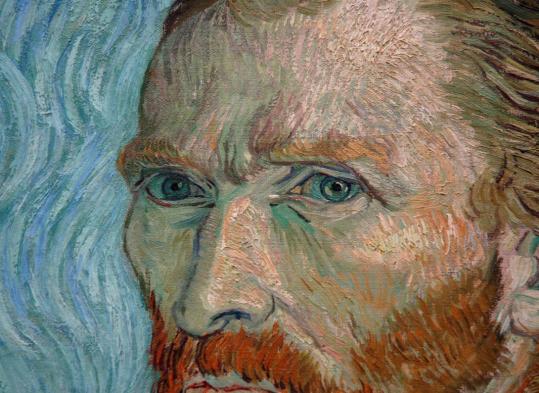 The life and art of van Gogh is the subject of a film at the Aquarium's IMAX Theatre.
By Ty Burr Globe Staff / April 2, 2009
Text size – +

Halfway through the film, a viewer finally figures out what "Van Gogh: Brush With Genius" is up to. The camera moves so close to the canvas that the smears of paint almost turn tactile, and the narrator points out that the artist's wide-angle way of framing his landscapes has the effect of pulling viewers in, surrounding them with vibrating colors.

It's one of many meta-moments in a featurette studded with them. "Brush With Genius" is now showing at the New England Aquarium's IMAX Theatre, so you can accept the film's intriguing, occasionally far-fetched wanderings or just sit back and let your head get wrapped in a sensory bath of paint and light. Either way, it's a bracing 40 minutes.

Director François Bertrand approaches van Gogh's life and art from a number of angles - literally so when he films, say, 1890's "Noon Rest From Work" on a bias, shifting the camera's macro-focus from background wheat to mid-ground cattle to foreground nappers. (Briefly, painting becomes drama.) He travels to the places van Gogh lived and painted, comparing real-life churches and chairs with the hallucinatory works created from them.

On the soundtrack pulse a Philip Glass-y score by Armand Amar and the steady voice of French actor Jacques Gamblin as van Gogh, commenting passionately on his craft and wryly on the myth that has grown up around him. "Women find me a lot more interesting since I died," he says.

One such woman is Ellen, a fictional museum researcher based on the real-life van Gogh expert Wouter van der Veen, who has the disadvantage of being male and not as beautiful as actress Hélène Seuzaret. She's a pleasant distraction but a distraction nonetheless; so is French filmmaker Peter Knapp, occasionally seen shooting a documentary about van Gogh that isn't the one we're watching.

Whenever things get too confused, "Brush With Genius" just goes to the paintings, which are reproduced on the IMAX screen with a nearly molecular intimacy of detail. Neither the human eye nor museum guards allow for such closeness; the thickly daubed brushstrokes suddenly loom up like mountains and you grasp the rhapsodic violence with which van Gogh saw the world. Maybe we should be thankful the filmmakers resisted 3-D - the sensory overload might have been unbearable.