Backstage insights into art and ideology 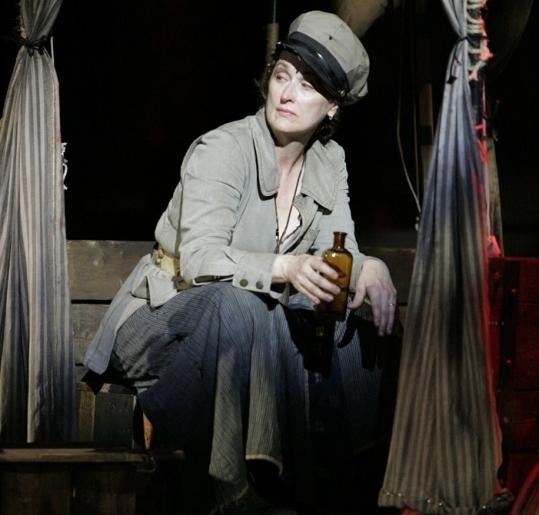 In the summer of 2006, thousands of theatergoers, stargazers, and people who enjoy Marxist German classics braved impossible heat to attend a production of Bertolt Brecht's "Mother Courage and Her Children" in Central Park. It was more hoopla than Brecht ordinarily receives, even by the standards of the New York stage. But this Public Theatre production was somewhat out of the ordinary. Meryl Streep and Kevin Kline were starring in a new translation by Tony Kushner, directed by George C. Wolfe with music by Jeanine Tesori. And it was free.

John W. Walter, a film editor and documentary maker, was around to film the show's rehearsals. But it wasn't just Streep's star that struck him. It was Brecht's. "Theater of War," Walter's invigorating film, asserts the value of Brecht - and the power of art - for our troubled times.

The film combines backstage footage, interviews with Kushner, Wolfe, Tesori, and Streep, and conversations with two professors, one of whom worked alongside Brecht, the other who teaches his work. What comes of all this is both a film of ideas (call it "Everyday Brecht") and a modest journey into the dramatist's life. More than once the two merge into living philosophy.

Much of the playwright's biography is explained by Tufts University's Jay Cantor, who discusses how Marxism presented Brecht the intellectual rigging for his political anger. The film applies the basic revelations of Marxism (work is tyranny, labor effaces personality, that sort of thing) to the Public's production itself. Initially there is reason to fear. Jeremy Lydic, who oversaw the props and wrote his thesis on "Mother Courage," and Marina Draghici, who managed the costumes, do their jobs while Cantor explains that our work is who we are.

It's not drudgery we see, though, but a kind of personal pride in craft. Eventually Cantor, who has allowed himself to stare down the Marxist rabbit hole and seems the glummer for it, moves on to the productive uses of Marxism, which, under these circumstances, have more to do with the effectiveness of collective action. That, after all, is how art is usually made.

Brecht wrote "Mother Courage" as an antiwar jeremiad, and the play's enduring strength is the ugly reach of its moral quagmire. Mother Courage runs a profitable mobile canteen for soldiers that she continues to haul even after the war has cost her her three children. Death is tragic, but so, in a sense, is this woman's will to live. Walter sees in the Central Park production a parallel to contemporary military conflicts. American troops were spending another year in Iraq, and Israel had just invaded Lebanon.

"Theater of War" is perfectly Brechtian in form - "action and commentary on the action," as someone points out. Much of the most stirring commentary comes from Streep, who objects to the general idea of filming rehearsals (process looks like "bad acting," she says), but appears to go with the Brechtian flow, letting us sees flubs, sweat, and tears.

Walter juxtaposes her grueling, almost deranged performance with footage of the legendary performance by Brecht's wife, Helene Weigel, who appears to be twice as formidable while doing half the work. These backstage scenes explore the Brechtian urge to create and rebel. But the movie wonders whether creation is an adequately confrontational act. What is the value of art in times of strife? Should people be sitting in the theater or rioting in the streets? Walter's film reminds us that once there was a man whose work made no distinction between the two.