Sex, lies, and spies: Julia Roberts and Clive Owen con each other and some mega-corporations in 'Duplicity' 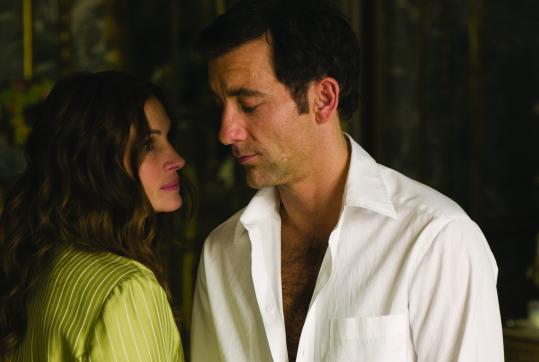 In "Duplicity," Clive Owen looks like he just wandered in from the other thriller that has him trotting the globe in expensive-looking suits. "The International" is a business-like conspiracy thriller that opened last month and deserves a better audience than it's getting. "Duplicity" stands to get a fairer hearing, since, for one thing, it's more conventionally enjoyable and, for another, Owen's partner in entertainment is Julia Roberts, who has returned from wherever she's been to show the Jessicas (Alba, Biel, etc.) and Scarletts of the world how it's done.

Written and directed by Tony Gilroy, who also made "Michael Clayton," "Duplicity" is a twisty suspense comedy bobbing at the same end of the pool as certain Coen brothers' movies and those Steven Soderbergh "Ocean's" capers, which is to say that it's reasonable to expect George Clooney to show up and serve everybody mojitos.

Roberts and Owen play a pair of ex-agents - she was CIA; he was MI6 - using their years in government intelligence to make money as corporate spies. They meet at a party in Dubai and go to bed together. She steals Egyptian air defense codes from him. He spends the rest of the movie trying to wring an apology from her. He continues even after they've teamed up to exploit a product war between two mega-manufacturers (of toiletries and the like) for a multimillion-dollar payday.

For the record, Roberts's character's name is Claire Stenwick, and Owen's is Ray Koval, but Gilroy maintains an air of mistrust so extensive that you don't believe anything they tell each other, starting with their names. In order to keep myself from getting hurt, they were just Clive and Julia to me. In order to keep myself from being confused, I tried to stop following the scrambled chronology and datelines -Rome, Geneva, San Diego, Dunwoody, Ga. When Owen tracks down Roberts in New York, five years after she betrayed him in Dubai, they have some lightning-round banter (he's hurt; she's sorry but she has no idea what he's talking about) that we hear them perform again, verbatim, in Rome, two years before that. What are they up to?

At some point, I got lost, anyway (not in the romance but because of it) and waited for Gilroy to stop toying with us and shake things out, which eventually he does. In the meantime, your time is better spent appreciating how Roberts and Owen are surrounded by so many superb character actors: Kathleen Chalfant, Rick Worthy, and Denis O'Hare are on the surveillance team; Tom McCarthy and Wayne Duvall work with Roberts inside Burkett & Randall; and the wonderful Carrie Preston, as a poor office patsy Owen seduces, snivels her way onto Roberts's nerves.

This movie is a breeze compared to the lawyerly Sturm und Drang of "Michael Clayton." "Duplicity" is guided by the suggestion that America is a land where the Cold War now consists of two superpowers trying to dominate the nasal decongestant market. In both films, Gilroy is clearly fascinated by what the average person has come to hate about large, venal companies: how they can get away with anything. But for the new film, he's redefined the ethical contract. Now a corporation is only as corrupt as its most loyal employees. To that end, the gotcha finale is a new contradiction: a rousing anticlimax.

Corporate anomie aside, the engine driving this film is sidelong romance of the "North by Northwest" or "Charade" school. Gilroy still takes himself far too seriously to make a great comedy, yet he's made a good stepchild to those older movies, which were as concerned with their stars' images as they were with clean, classical storytelling. I appreciate the idea of Roberts trying to look anonymous, wearing espadrilles tall enough to put her on the moon. It's like a giraffe to try to hide under a hen.

Gilroy's master joke reconsiders all those years of Roberts's characters being incidentally vindicated and validated by money courtesy of love - in "Pretty Woman," "Erin Brockovich," and two "Ocean's" movies, for starters. Sometimes, as in "Brockovich" the payday could be nauseating. But throughout "Duplicity," she at least is in charge, going right after the loot herself.

Even when Owen out-talks her, Roberts always has the upper hand. She's among the very last self-secure movie stars we have. And at the brink of middle-age (she's 41), her face has acquired an almost exotic refinement. She just needs a cubist to move the parts around. What she has with Owen (they screamed and yelled at each other in Mike Nichols's "Closer") is not as electric as what she and Clooney bring out of each other. With Owen, the bond is strangely platonic. (Not for nothing, the entire movie hinges on the retrieval of an elusive chemical formula.) But what they lack in eroticism they make up for with teasing comic connection. Watch his face go white when they banter over some underwear she says she found in his apartment.

Their comedy is almost as good as a sensual spark. The Brad Pitt and Angelina Jolie of "Mr. and Mrs. Smith" gave us a long, frightening peek into their boudoir power dynamics. It was, "Who's on top?" With Roberts and Owen, it's gentler. The question is, "Who's on first?" If there's a problem with this, it's that the entire movie is predicated on lies being a turn-on. So ultimately it doesn't matter whether he believes that she loves him. We're not sure we do.

When Roberts is in bed with Owen at a Roman hotel, should we believe her smile? Doesn't asking amount to a kind of Hollywood heresy. In that mouth we trust, right? But "Duplicity" so thoroughly equates sex and money that, in a manner apt for a recession, the audience is rewired when it's over. You don't care whether they love each other. You just want to see them paid.