And the cat on a stick goes to

Chlotrudis is as independent as films it honors 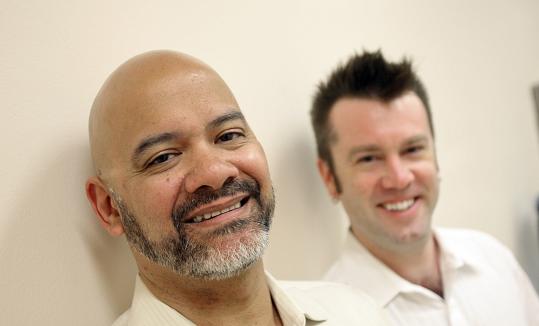 Marilyn O'Connor was new to using computers about 10 years ago and thought she'd try out her search engine. Like any good mother, she typed in the name of her son, who happens to be Philip Seymour Hoffman.

Up popped a strange reference to something called the Chlotrudis Awards in Boston, which had given Hoffman an award the year before for his role in "Next Stop Wonderland."

"I thought, 'Well, what is this?' " O'Connor said in a telephone interview. "I clicked on them and the description intrigued me because I have always loved movies. I am very opinionated, as my son would say, about movies and actors."

O'Connor is a retired family court judge from Rochester, N.Y., but she'd found her kindred spirits at Chlotrudis, an organization of self-described film geeks, or "bossy audience members," as one member describes it. It started out in 1995 as librarian Michael Colford's personal beef with the Oscars and has evolved into a quirky, vibrant nonprofit called the Chlotrudis Society for Independent Film, which aims to elevate the profile of overlooked films and stimulate discussion about them.

Next Sunday Chlotrudis - named for Chloe and Gertrudis, Colford's cats - celebrates the 15th anniversary of its signature event, the Chlotrudis Awards, which honor films, actors, and filmmakers nominated by its members, at the Brattle Theatre.

It's a big milestone for a small, 125-member organization that takes on the Oscars in an elaborate ceremony complete with a live musical number, envelopes, movie clips, even a trophy - a cat on a stick made by Colford's sister. ("She's crafty," he said.) Once in a while a star even shows up, most notably Philip Seymour Hoffman (a Chlotrudis favorite since the late '90s) in 2004, then just an indie darling, who was coerced into attending by his mother.

There have been others, too - French cinematographer Agnes Godard, Canadian Ellen Page before she made it big in "Juno," Montreal-born actress Genevieve Bujold, Toronto actor Maury Chaykin, who in 2006 received Chlotrudis's Career So Far Award, the Chlotrudis version of a lifetime achievement award. (They have a thing about Canadian film.)

But no special guest has been as loyal and loved as Philip Seymour Hoffman's mother, who often attends ceremonies, presents awards, and never fails to surprise or provoke. In 2004 she was drafted to announce the award for Best Picture, which turned out to be "Lost in Translation." As it happened, she hated it, and refused to say the name. (Colford stepped in and made her do it.)

"We love Marilyn," said Colford, who describes her as "a very, very short woman with Phil's face, basically." He adds: "She teases me that I don't trust her onstage but in fact her appearance is always one of the night's high points. She is such a treasure."

Originally she joined anonymously, telling Colford coyly that she had a family member in the business; she called herself "Marilyn at the Movies" in their online film discussion group. "Of course we immediately started speculating," said Colson, who knew she had to be related to someone they'd honored: Who else would Google Chlotrudis? At first they thought she was Kevin Spacey's mother, but after a few months O'Connor revealed herself and they met at the Toronto International Film Festival in 2000.

She fit in perfectly; Chlotrudis is all about dissent. Colford was inspired to start it by the 1994 film "Forrest Gump," which won six Oscars. He hadn't seen it - still hasn't - but that didn't stop him from objecting to it. "I was just getting tired of the Oscars awarding films that I personally wasn't that interested in," he said. He also felt the Academy Awards didn't cast a wide enough net in their nominations.

"It seemed like [they] made their nominations from a pool of six to eight films that deserve attention during awards time," said Colford, who works at the Boston Public Library.

"I thought surely there are more than six to eight films that deserve attention."

The first awards ceremony was basically an anti-Oscars party held in his apartment in Andover; most of the members were his friends, who were principally librarians. They were asked to nominate their own choices in a variety of categories and they voted when they got to the party.

As the event grew, it moved to Harvard Divinity School, then to a hall at Berklee College of Music, then the Brattle. Now it operates on a larger scale, though still on a low budget. They've added a musical event - a lively song medley and parody, usually with a film theme - orchestrated by Colford's husband, Scot Colford, the Web services manager for Boston Public Library and a former actor.

Over the years, they've developed a complicated and ever-evolving set of regulations and traditions. There are Chlotrudis "members" (they pay dues and vote) and "allies" (members of the film community who "collaborate"). There are unusual awards categories like "Buried Treasure" and "Best Performance by an Ensemble Cast." One year, they gave O'Connor a special Producer of the Year award. "It was for producing Phil and Gordy," said Colford. (Gordy Hoffman is her other son; he wrote "Love Liza," which starred Philip.)

People who vote are required to see a minimum of 25 "Chlotrudis-eligible films," even though "it's not easy to determine what exactly an 'independent film' is," Michael Colford says. To be nominated, a film cannot have been released on more than 1,000 screens nationally during its first four weeks. Films that only play festivals or are released direct to DVD are not eligible.

And nominees aren't there to accept awards. "We do not encourage nominees to attend," Colford said. "I'd hate it if they came and didn't win."

The smallish audience of around 125 people is made up mostly of dues-paying members and members of the Boston film community, including critics, film festival programmers, theater exhibitors, and representatives from consulates in Boston. It's open to the public, though Colford says outsiders tend to have trouble grasping what Chlotrudis is about. It's easier to say what it isn't.

"We're not just a film club," said Beth Curran of Jamaica Plain, a core Chlotrudis member who works for a financial investment company. "We're also not the social club side of a museum or festival, or a membership arm of a theater. I mean, we have nothing to sell, so to speak. It's just about the movies."

This year, not a single entry in the Best Movie categories overlapped with Oscar nominees. The hottest film in the running is "My Winnipeg," Guy Maddin's "docu-fantasia," which is nominated in six categories, including best movie and best documentary. "It's his '8 1/2,' " explained Scot Colford, referring to Fellini's iconic 1963 film.

The special guest this year will be Danish actor Paprika Steen, whom Colford contacted after he saw "The Substitute," in which she plays an alien who comes to earth in the guise of a substitute teacher. She will receive a Body of Work award for excellence in acting and directing.

And of course, Marilyn O'Connor will be there. "I love them," she said. "I think they are genuine. They are real. They are bright. They are smart. And all they are doing is saying to actors and technicians and writers, 'We love what you do.' "

The Chlotrudis Awards will be held Sunday, March 22, 5 p.m. at the Brattle Theatre. Tickets are $20. www.chlotrudis.org

ALSO THIS WEEK
"The River Ran Red," a documentary interviewing survivors of the Armenian Genocide, by survivor J. Michael Hagopian, will have its East Coast premiere March 22, at the Arsenal Center for the Arts' Mosesian Theatre in Watertown. The film, the last in a trilogy by the 95-year old Hagopian, culminates his interviewing of more than 400 survivors of the genocide which swept through eastern Turkey during World War I and resulted in the deaths of more than 1 million Armenians. Following the 4 p.m. showing of his film, which is being sponsored by the National Association for Armenian Studies and Research, of Belmont, Hagopian will participate in a panel discussion. www.naasr.org or 617-489-1610.

The Boston Underground Film Festival will run this year from Thursday to March 26 at the Kendall Square Cinema in Cambridge, with showings at the Brattle Theatre on Friday and Saturday. The festival kicks off with the New England premiere of Frank Henenlotter's "Bad Biology," his first film in 16 years since cult classics "Frankenhooker" and the "Basket Case" trilogy. Other screenings include the documentary "I Think We're Alone Now," which follows two women obsessed with '80s pop star Tiffany. Tickets are $8 per screening or $75 for a festival pass. www.bostonunderground.org or 617-903-3707.

On Saturday the Institute of Contemporary Art is hosting two performances of "Dean Wareham and Britta Phillips: 13 Most Beautiful . . . Songs for Andy Warhol's Screen Tests," a multimedia show where Wareham and Phillips, former members of the band Luna, perform live music while the Warhol films are projected overhead. Shows at 7 and 9:30 p.m. Tickets are $25. www.icaboston.org, 617-478-3103.