Nothing exciting about 'Miss March' 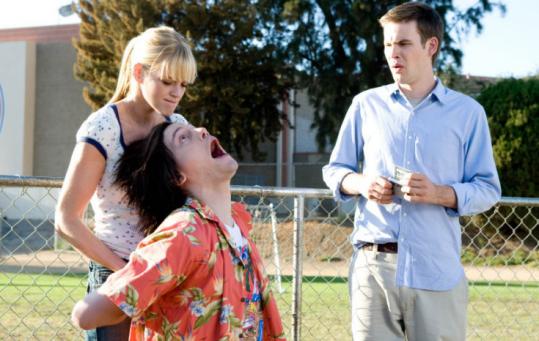 'Miss March" is a sex comedy that appears to have been made by people who've never actually had sex. How else to explain a script that talks in raunchy circles around Topic A but takes a left turn into exploding-poo jokes whenever the characters threaten to get down to business? The movie's aiming for the drunken college crowd but most of the gags have the nervous, giggly idiocy of two middle-school kids flipping through dad's "Playboy."

That magazine and its faded grip on the culture looms large here. The brain trust behind the film is the duo of Zach Cregger and Trevor Moore, who co-direct and co-star, as well as having a hand in the screenplay. They're part of a TV sketch-comedy team called "The Whitest Kids U Know," which I truly hope is funnier than this movie.

Cregger plays Eugene, a straight-arrow cluck who's just about to lose his virginity to high school sweetheart Cindy (Raquel Alessi) when an unfortunate fall down some stairs puts him in a four-year coma. The first thing he sees upon awakening is his friend Tucker (Moore) holding the March issue of Playboy. Cindy is the centerfold.

OK, fine, that's a premise - and "Miss March" proceeds to waste it with limp gross-out gags limited to body parts above the knees and below the ribs. Moore's Tucker, dragging Eugene on a road trip to confront Cindy at the Playboy mansion, plays the standard randy-best-friend role with remarkable lack of charm or comic timing. He's supposed to be a funny free spirit; instead, he's just a jerk.

Craig Robinson, a rudely enjoyable fringe benefit of Judd Apatow comedies like "Pineapple Express," plays a rap star pal of the two leads; again, whatever laughs he gets come from toidy-talk shock value rather than anything genuinely funny. There are women characters but they're mostly just blow-up dolls, projections of the lusts and fears of the filmmakers.

You take what you get: a tribe of enraged firefighters chasing Tucker throughout the movie has some cheap laughs, and the sight of Hugh Hefner himself, giving the heroes advice toward the end of the film, is unexpectedly moving. I guess he's this movie's Yoda, but he merely looks like a wizened and sad old man, cultural millenniums away from his hubba-hubba '60s heyday. "Miss March" is, among other things, proof of how far Hef's vision of enlightened sexual chauvinism has degenerated into meaninglessness over the decades.