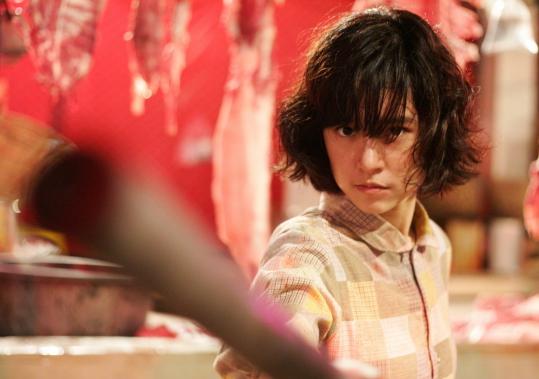 It's called "Chocolate," but "Cheese" would have been just as good. Soaked with tears, full of schmaltz, and yet strewn with bodies, Prachya Pinkaew's new kick-'em-up is extreme action, extreme melodrama, and extremely hard to resist. Were I to make a movie about a young autistic Thai woman who goes on a martial arts rampage to collect outstanding debts owed to her ill ex-gangster mother who needs the money for chemotherapy, I hope I'd end up with something like "Chocolate." It's part karaoke video, part "Kill Bill."

Zin (Ammara Siripong) worked for Thai organized crime until she fell in love with a despised yakuza (Hiroshi Abe) and quit the business. The couple split up, but she became pregnant with their daughter, Zen, who, courtesy of a steady diet of Tony Jaa movies (which Pinkaew happens to have directed), grows from catatonic street performer to steely street-fighting savant. She's played with bottomless energy by Yanin Vismitananda (her nom-de-punch is now JeeJa Yanin). The absurdity is obvious when Zen fights (her name is Zen!) but especially when somebody else does. Look no further than Priscilla (Dechawut Chuntakaro), the Thai crime boss's transvestite henchman, and her gang of tacky drag-queen assassins.

Pinkaew directed the film from a script by Chukiat Sakveerakul and Nepalee Sakweerakul, and they've built in some amusing ironies. Zen is fine with flying kicks but she has a fear of flies. As for the fight sequences, they're simultaneously standard and marvelous. Yes, it's Pinkaew's usual array of easy-to-film-in locations, but they achieve hilarious poetry - a warehouse, an icehouse, a slaughterhouse, a teahouse, a house-house.

It's tempting to see Zen's revenge for a few dollars here and a few dollars there as a sign of the economic times. It's just as tempting to watch the unhinged acting and understand how a Thai episode of "Good Times" might go. Of course, you could just salute the stuntmen who take punches to the face and pipes to the ribs the way some people take lemon in their tea.

This is Yanin's first film, but she's already on her way to blending Jaa's indestructibility, Jackie Chan's physical comedy, and Jason Statham's kinetic eloquence into one brutalizing package. To see her roll down a falling file cabinet or slide under a glass coffee table in the limbo position is to love her. Her "woos" and howls would make Michael Jackson say "hee hee." But the most outrageous thing in the movie is not the finale, where Zen takes out about three dozen men. It's the outtakes that show JeeJa icing down her face and having her leg splinted. They're guilt-inducing sights. This woman has suffered for our pleasure.

In Thai and Japanese, with subtitles