An ancient tale gets a colorful retelling 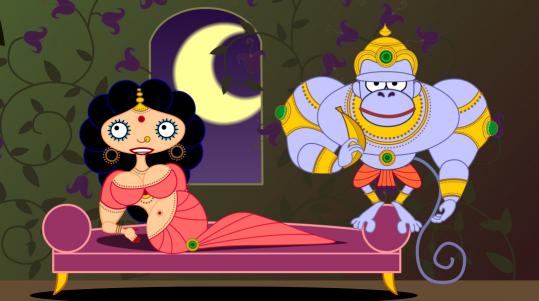 I'm not sure what's gotten into the water at the Museum of Fine Arts, but the film programmers have been screening some delightful alt-animation lately. Last month was France's "Azur and Asmar," and now comes "Sita Sings the Blues," an almost indescribable pleasure from Brooklyn-based cartoonist and animator Nina Paley. The film, dazzling and poignant and five years in the making, retells the ancient Indian epic "The Ramayana" from a gentle but insistent feminist perspective.

At first, you may have no idea what's going on here. The opening sequences are a paroxysm of colors, visual patterns, and old-time jazz that seems calculated to obliterate a viewer's orientation. "Sita Sings the Blues" eventually settles down to shift between four radically different styles of animation, each tethered to a strand of narrative.

In the most straightforward story line, "The Ramayana" is retold through bold but primitive mural-style visuals: The heroic prince Rama (voiced by Debargo Sanyal) and his exile; his rescue of cherished wife Sita (Reena Shah) from the evil clutches of many-headed King Ravana (Sanjiv Jhaveri); Rama's testing of her purity by making her walk through flames; and so forth.

These segments are commented on, often hilariously, by a trio of modern-day Indians (Aseem Chhabra, Bhavana Nagulapally, Manish Acharya) who constantly correct each other's hazy memories of the story; they're represented by Indonesian shadow puppets and the "Ramayana" characters by a wildly colorful collage of Indian illustration art.

Regularly punctuating the film are musical numbers that re-enact Sita's dilemmas using the precise mathematical patterns of Flash animation and the vocal stylings of Annette Hanshaw, a long-forgotten 1920s jazz-baby singer who, on the basis of this movie, deserves mightily to be rediscovered. These segments threaten to turn repetitive but their warm and stinging wit saves them, with a Betty-Boopish Sita singing the Tin Pan Alley standard "Mean to Me" as her husband forces her through the flames.

Finally, Paley puts herself into "Sita Sings the Blues," in an intentionally sloppily drawn sub-narrative about an artist named Nina whose husband makes her move to India for his job and subsequently dumps her. I could have used more of these scenes, since a viewer only gets a hint of the emotional distress the filmmaker must have gone through.

On the other hand, that's the point. Paley sublimates her anguish into an alternate reading of "The Ramayana" - to her, Sita's the hero of this tale, not Rama - while taking sustenance from the flapper wisdom of Hanshaw's singing. If "Sita Sings the Blues" whirls us around the world visually, the movie's gracefully interweaving story lines bring it all back home. Paley forges a bond of sisterhood here that traverses centuries and cultures; underneath the dazzle is an unexpectedly moving vision of three women shoring up each other across time.

Written and directed by: Nina Paley

At: Museum of Fine Arts, today and various play dates through March 22