Masked madmen: The superpowers of the graphic novel are weakened, but 'Watchmen' still packs a wallop 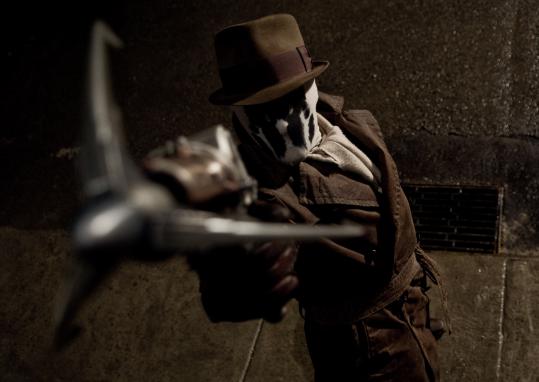 Rorschach (played by Jackie Earle Haley) is the secret star of ''Watchmen.'' He's at one with his super-identity - and also crazy. (CLAY ENOS)
By Ty Burr Globe Staff / March 6, 2009
Text size – +

"Watchmen" is finally upon us, and that will mean everything to you or nothing. The new superhero movie - an anti-superhero movie in many ways - is based on a fearsomely smart DC comic series that ran for 12 issues in 1986 and '87, was quickly republished in book format, and has nourished a large and fanatic cult ever since. For good reason: As written by Alan Moore and drawn by Dave Gibbons, "Watchmen" the comic book has the ideas, the characters, the layered details, and the thematic heft of an epic novel. With one stroke, it brought conceptual respectability to a scorned medium.

Now, we all know what happens when great novels get adapted into movies. Director Zack Snyder, the man who gave us the digitized meathead heroics of "300," has shouldered the task of filming an unfilmable work after directors as stubborn as Terry Gilliam, Paul Greengrass, and Darren Aronofsky tried and failed. He has come up with a luridly violent 10-ton behemoth that at first works beautifully, then only in pieces, and then hardly at all. It's a case of a filmmaker being simpler than his material.

At least Snyder sticks to the story. This "Watchmen" still takes place in an alternate 1985, a world that has seen two generations of costumed heroes since the 1940s and has finally tired of them, outlawing their theatrics and forcing most into retirement. Dan Dreiberg (Patrick Wilson), for instance, still keeps his Nite Owl outfit and flying car in a basement lair, but he has gone physically and morally flabby. Dressing in costume used to make him feel sure he knew right from wrong. Now he isn't sure about anything.

And he's one of the normal ones. The Comedian (Jeffrey Dean Morgan) is a right-wing brute with a sideline in CIA dirty tricks; he once tried to rape the first Silk Spectre (Carla Gugino). Ozymandias (Matthew Goode) has become fabulously wealthy in retirement while entertaining a raging god complex. Dr. Manhattan (Billy Crudup), a scientist turned blue and omnipotent after a lab accident, may actually be God. His lover, Laurie Jupiter a.k.a. Silk Spectre II (Malin Akerman), has had mother issues ever since Mom forced her into the tight costume.

Then there's Rorschach (Jackie Earle Haley), a bitterly paranoid little nutcase who fancies himself an urban vigilante - Travis Bickle with a polka-dot facemask. Rorschach's the secret star of both comic book and movie because he's free of self-doubt: He's wholly at one with his super-identity. He's also crazy. The genius of "Watchmen" is to wonder what sort of people might actually put on costumes to fight crime - with the exception of Dr. Manhattan, no one here has superpowers - and to conclude that they'd have to be fame junkies, power freaks, psychos, or naifs.

All these characters come with lengthy back stories through which the movie hurtles at top speed. There's a mystery plot - someone is killing the fading superheroes, starting with the Comedian - and that plot gradually widens to take on socio-political and ultimately metaphysical dimensions. "Watchmen" the movie has to fill in an entire universe while simultaneously spinning it forward; it's 163 minutes long and you feel every fat, million-dollar second of it.

Can audiences who haven't read the comic play along? I'm not so sure they can; the narrative density that's so rewarding on the page turns exhausting, even oppressive, after a mere half-hour of screen time.

More problematic is that Snyder, a sensualist of a movie director, is adapting the work of a furious moralist, Alan Moore. Scratch that; Snyder's a sensation-alist, happy to weave sound and imagery into a cinematic onslaught, but much less comfortable with narrative cohesion or simple human emotion. He can show us what the end of the world looks like but has no idea how to convey the sound of two people talking. And this movie has a lot of people talking.

The best moments in "Watchmen," then, work as delirious music-videos: the opening credits, scored to Dylan's "The Times They Are A-Changin'," that fill in decades of rich alterna-history; or the '80s hit "99 Luftballons" that briefly turns the mood from somber to ecstatic as Dan and Laurie sneak off for an undercover date disguised as average people. Yet this approach also results in the movie's absolute nadir: a sex scene, set to - groan - Leonard Cohen's "Hallelujah," that gets jammed between earnestness and parody and ends up just monumentally vulgar.

When in doubt, Snyder falls back on ultra-violence, and "Watchmen" earns its R rating in the grim abandonment with which bones are snapped and arms sliced off. There's an unexpected puniness of spirit to this movie. In the original comic, a sequence where Dan and Laurie fight off a gang of muggers is about the thrill of rediscovering one's inner superhero. On screen, that scene's about doling out graphic punishment, and it's an audience-rouser in the most ugly and obvious way.

The performances are a mixed bag. Akerman is downright bad, but the role of Laurie was always half real woman and half fanboy fantasy. Crudup, by contrast, manages to get Dr. Manhattan's sub-atomic Zen majesty even under the full-frontal blue pancake makeup and white contact lenses. Goode is miscast as Ozymandias; in a role the comic creators thought of as a jut-jawed Redford type, he only suggests Seth Myers of "Saturday Night Live" - a petulant lightweight rather than a Master of the Universe.

Wilson is good as the neurotic Nite Owl, though, and Haley is tremendous as Rorschach, creating an entire tormented character through whispered voice alone. (When the mask comes off and we finally see his face, it's like the fulfillment of a bad dream.) The movie's Rorschach is the only remaining vestige of Moore's demon message: that we dream up superheroes to break the laws - physical, legal, social - we're too timid to break for ourselves. As Rorschach says to a prison full of convicts hellbent on killing him, "I'm not locked in here with you. You're locked in here with me."

Hardcore fans of the comic may be outraged that the film changes key particulars of the ending - farewell, giant squid - but I'd argue that that and other excisions (farewell, "Tales of the Black Freighter") are for the better, cinematically speaking. Overall, Snyder has given us a "Watchmen" that's visually faithful to the original to the point of panel-by-panel fetishism, and that may be enough for many members of the cult.

The movie's still the lesser artifact, though. Where Moore and Gibbons created the rare superhero story that engages the head and the heart, Snyder is incapable of working from anything except his gut. The director has done something commercially feasible and artistically depressing. He has turned a brilliant graphic novel back into a comic book.

Cells to celluloid: Check out films based on comic books

Cells to celluloid: Check out films based on comic books

Written by: David Hayter and Alex Tse, based on the comic book series created by Alan Moore and Dave Gibbons