If it's Phoenix's finale, 'Lovers' is fitting 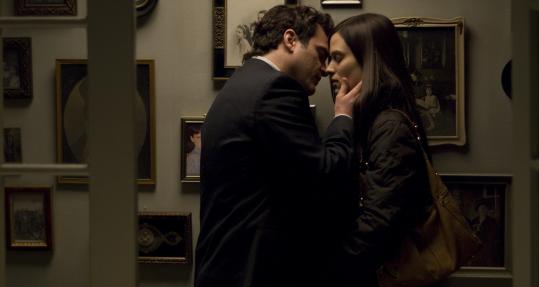 MAGNOLIA PICTURESJoaquin Phoenix is Leonard and Vinessa Shaw is Sandra, the girl who wants to save him, in ''Two Lovers.'' (MAGNOLIA PICTURES)
By Ty Burr Globe Staff / February 27, 2009
Text size – +

Even before his latest shtick - the professed retirement, the rap career, the Ted Kaczynski beard - Joaquin Phoenix had established himself as one of our most contrary movie stars. He's big and interestingly unhandsome, with none of the agile fire of his late brother, River. This Phoenix moves slowly, as though his muscles were a half step behind his brain and unsure whether it were a good idea to follow orders. As a movie star, he resists charisma and persona, and his characters resist, too. That's why we keep watching.

Yet he has the curiosity of a genuine actor, and on the basis of "Two Lovers," I'm inclined to think the recent foolishness is just a stunt of Andy Kaufman-esque proportions. Phoenix plays a real Marty in this one, an early-30s schnook named Leonard living with his parents in Brighton Beach, Brooklyn, after a failed suicide bid. He's treading water, a sensitive but closed-off hulk delivering dry cleaning around the neighborhood. Then two women walk into his life and rearrange the furniture.

The "good" one is Sandra (Vinessa Shaw), a nice Jewish girl whose father (Bob Ari) is buying Leonard's dad's dry-cleaning business. Sandra is observant, cultured, and maternal, and she sees in this brooding man-boy a wounded bird worth caring for. The "bad" girl, by contrast, is straight out of the Philip Roth playbook: Leonard's new neighbor Michelle (Gwyneth Paltrow), a highly strung Manhattan club-hopper with a married businessman boyfriend (Elias Koteas). When she wanders into Leonard's apartment and doesn't recognize a dreidel, the screen may as well flash "DANGER: SHIKSA ALERT." Naturally our hero is besotted.

"Two Lovers" is written and directed by James Gray, who up to now has specialized in moody, occasionally ponderous outer-borough crime dramas like "The Yards" and "We Own the Night" - Scorsese with a side order of Cassavetes. The new movie, Gray's first without guns and mobsters, was inspired by Dostoyevsky's "White Nights," which seems like a stretch until you notice how isolated Leonard is from the waking world, and how painfully his soul trembles.

Sandra serves to calm the trembling but Michelle validates it, and on his nights on the town with the latter, you can see Leonard turn into the person he thinks he should be - confident yet kind, assured yet reassuring. He wants to be the savior for Michelle that Sandra wants to be for him, even at the risk of playing the sap. Love, as Gray knows, is like that.

The storytelling here is at times as awkward as its hero, and since it is a Gray film "Two Lovers" takes itself dreadfully seriously. Yet it's one of the few movies I've seen recently that improves on a second viewing, in part because Phoenix does such remarkably subtle work. He has his "big" moments, and they can be embarrassing because Leonard is insecure in his skin, especially when trying to impress Michelle. But he also nails the drama of a smart, fallen man trying to find his feet again, shaking off the babying fears of his mother (Isabella Rossellini, who you'd never expect to find in Brooklyn but who's touchingly shopworn nonetheless) and confused over which road to take.

If Phoenix isn't kidding about retirement, it's performances like this I'll miss: angry and heartfelt and weirdly life-sized. "Two Lovers" lets Leonard down, though, and us too, with a third act that's meant to be both affirming and ironically tragic yet that plays simply as misfired melodrama. I think I know why, too: The casting of Shaw renders Sandra, a mother-figure with need issues of her own, simply too attractive, too confidently sexy, to represent the bourgeois compromise Leonard is afraid he might have to make with his future.

Maybe that sounds superficial, but film rests on what we see, and what we see here are two women more alike than the filmmaker may realize. I kept thinking of Betty and Veronica, the good girl and the heartbreaker that the "Archie" comics insist are different as day and night but that are drawn the same way except for the color of their hair. In "Two Lovers," Gray makes a similar mistake, and it leaves his hero looking like a jughead.

Written by: Gray and Richard Menello