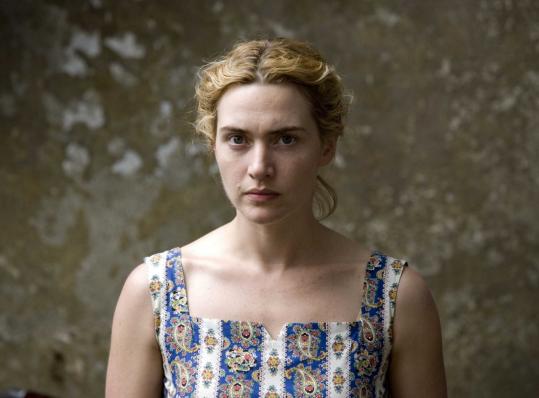 If you accept the idea that the Oscars are a measure of actorly greatness, Kate Winslet might be Hollywood's next Great Actor. At 33, she's been nominated for six Academy Awards (a record for someone her age), and, tonight, is the presumptive favorite to win her first for "The Reader." At this pace, she would surpass Katharine Hepburn (12), Jack Nicholson (12), and eventually Meryl Streep (15). But does Winslet need an Oscar to prove she's great?

Any actor who immediately follows a world-dominating phenomenon like "Titanic" with one movie about the search for spiritual enlightenment ("Hideous Kinky") and another in which she undergoes spiritual detox ("Holy Smoke") is great to me. Those were two vital pieces of acting that almost nobody saw. But they were all 10 years ago. A career needs an arc, and for most stars that trajectory tends to peak right about the time your name is read and the orchestra tries not to interrupt your acceptance speech. Julia Roberts, Helen Hunt, Gwyneth Paltrow, Halle Berry, Charlize Theron, Hilary Swank, and Reese Witherspoon are recent best actress winners, and they haven't been quite right since.

But pursuing a high point for that arc inevitably leads to movies like "The Reader" and "Revolutionary Road," the two films that have made Winslet an awards magnet this season. These are referred to as prestige films because they've been concocted for maximum importance, fortified with seriousness, literary source material, decency, artiness, and other vitamins. They're the farm-raised salmon of movies. To enhance their attractiveness to the Academy, both were released at the end of last year, and seeing Winslet so mannered in both is dispiriting, since, for my money, she's always been a wild-caught kind of woman.

Directed by Winslet's husband Sam Mendes and co-starring Leonardo DiCaprio, "Revolutionary Road" is a marriage-on-the-rocks drama that, unofficially and prematurely, was billed as a "Titanic" reunion. Set in Germany after the Holocaust, "The Reader" was made by the people who brought us "The Hours," and casts Winslet as a lusty former Nazi.

It's ridiculous casting to everyone but the filmmakers. Imagine a movie about the KKK in which one of the Klansmen rips off his hood and turns out to be Sophia Loren. Winslet does nothing wrong. But the movie doesn't ask her to risk anything. It's as though playing a former Nazi guard who seduces a teenage boy is risk enough. This, of course, misses the point of Kate Winslet. At her best, she personifies risk.

In "The Reader," that risk is mostly sexual. Still, I'm worried. How much longer until Winslet has too many Oscar nominations to have movie sex? That would be a travesty, since she is the most casually carnal woman in the movies.

The world met her in 1994 as an adolescent in Peter Jackson's "Heavenly Creatures." Winslet plays one of two misfit friends who wind up committing a murder. From the start, we knew she would be appealing to a lower power (one a few organs down from our heads). What we didn't know was how well Winslet could do this while maintaining her integrity.

"Heavenly Creatures" is still a remarkable movie, an unusual conflation of enchantment, horror, and hormones. Winslet plays a sort of mean girl, but there's a tinge of madness about her. (That laugh, for one thing.) She seduces the soul and imagination of Melanie Lynskey, who, career-wise, still doesn't seem to have recovered from the relationship. These two had a stronger psychic and emotional bond than Winslet has had with any man. With all due respect to DiCaprio, if she should be reuniting with anyone, it's Lynskey.

From there it was onto Ang Lee's "Sense and Sensibility," a cerebral approach to Jane Austen that Winslet stole with breathless, almost coltish yearning. It was a star-making performance. (She lost the supporting-actress Oscar that year to Mira Sorvino. So things have a way of working out.)

A few years later came "Titanic," and it was the first time I'd heard her try an American accent. Unfortunately, it wouldn't be the last. Winslet's natural British speaking voice has a great range that a fake American accent tends to choke away and flatten. While she and DiCaprio were fine together, and roughly the same age, she seemed older and more confident in both her topless modeling scene and their big, windshield-steaming love session. Of course, he became the megastar. He was safely boyish. She, by comparison, was comfortably sexual - womanly - in a way movie stars never are anymore.

A quick survey of Winslet's peers reveals how few of them can fold in sexuality with craft. Angelina Jolie is sexy yet too intimidating to be appreciably sexual - outside of certain S&M scenarios, anyway. Witherspoon began her career as an aggressor and turned into a sweetheart. And Swank still seems to be trying to defend her very femininity.

Winslet's body - fleshy, curvaceous, ostensibly real - sets her apart from less full-figured stars. She's done her share of boring costume dramas ("Finding Neverland" comes to mind), but her kindred spirit isn't a dame like Vanessa Redgrave or Judi Dench. It's a dynamo like Beyoncé, a woman who can use her entire bodacious being as an empowering life force. In Jane Campion's gender battle "Holy Smoke," and Todd Field's suburban drama "Little Children," Winslet tries to strike back at a world that's boxed her in.

Maybe her brick-house build makes her more relatable, but it also gives the camera something real to watch. Nudity comes naturally to Winslet, but, until "The Reader," it never came cheaply. In "Holy Smoke," she plays a woman forced to leave an alleged religious cult. When she confronts Harvey Keitel without her clothes, she does so as both a sexual and political provocation: the woman has nothing to hide. Practically speaking, Winslet doesn't strike me as the sort of actor who ends a sex scene with a sheet pulled up to her chin. That's not what normally happens after sex. And, sometimes, like in "Little Children," there's just no sheet.

The words "neurotically heartsick Brooklyn hipster" don't naturally produce an image of Winslet's face. But chasing after Jim Carrey in "Eternal Sunshine of the Spotless Mind" (2005), she was manic and strange. The character was too much of a cipher to be totally human. Yet Winslet seemed to have fun exploring the feelings and tics that keep a cipher going. She turned what could have been a deadening assignment into an adventure.

In John Turturro's bonkers 2005 musical, "Romance & Cigarettes," the emotion was despair, and it so inflamed Winslet - who played a red-headed Scottish hooker infatuated with James Gandolfini - that you ache because of her ache. It's not the lingerie you remember about her production number, or the fact that she can't really sing. It's that the song (a Connie Francis number) explodes out of her. Jolie can do a lot. But she can't do that.

Interestingly, Winslet's bodily brilliance isn't purely a matter of sex. Her physicality has a lot to do with how much space there is around her. The more she has the better she is. As Ophelia in Kenneth Branagh's underrated, unabridged "Hamlet" (1996), she had an entire empty ballroom in which to go mad. Her tearful, babbling Ophelia might be the best thing in the movie. In "Sense and Sensibility," she had knolls and hillsides; in "Holy Smoke," the Australian desert. In "Eternal Sunshine," it was Jim Carrey's warped memories and director Michel Gondry's surrealist sets. She makes the vastness of these real and constructed spaces seem intimately hers. She runs, tumbles, drags herself on the floor, humps the air, dances, wails. She's free to be as big as these locations, as weird and as complex as they are, too. She's free to be free.

In both "Revolutionary Road" and "The Reader," she is penned in - marriage in one film, prison in the other. With her wings clipped, there's just no place for her to fly.

Winslet tends to play a certain kind of woman. She is obviously sensual - maternal, too. The men she has sex with are unlikely - a much younger boy, a stuttering bookworm, a cousin, James Gandolfini. At some point, she might lose her mind but never her nerve. This character is prone to adultery, but she is not promiscuous (often a mother never a whore). She's simply restless, in pursuit of an ideal - spiritual enlightenment or maybe a man better than the one she married. (Perhaps that man is you.)

Part of the trouble with "Revolutionary Road" and "The Reader" is that they push the typical Winslet character to the verge of parody.

What's missing is the sense of adventure she often needs to thrive. It doesn't help that neither director - Mendes or Stephen Daldry - has the gonzo sensibility to bring out her best. Jackson, Campion, Turturro, and Gondry pushed Winslet to new, exciting places. Mendes and Daldry are making her into Meryl Streep - Streep the technician, not the newly sensualist Streep of "Mamma Mia!" - which, when you think about it, is really just the old Winslet.

With "The Reader," it's as though someone in Winslet's camp watched her previous films and asked, "Now how can we do this and win her an Oscar?"

A few years ago, Winslet hilariously predicted the answer. On the HBO comedy "Extras" she played herself playing a nun in a WWII drama and corrects the two actors who laud her bravery for taking the part. "I don't think we need another film about the Holocaust, do we?" she says. "It's like, how many can there be? We get it: It was grim. Let's move on." She goes on to confess that she took the part hoping to win that elusive Oscar.

It's surreal that tonight her lampooning joke might come to pass. If it does, congratulations, Kate. Now let's move on.