The Secret of the Grain

'Secret' is a feast of a family epic 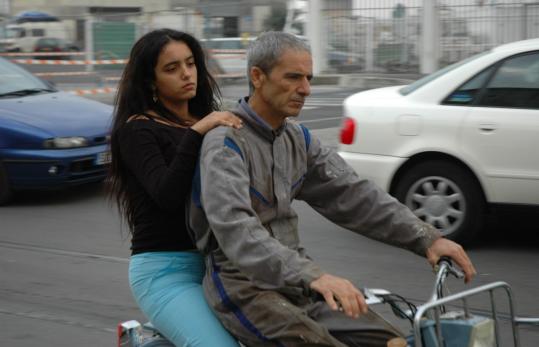 You don't know you want to be at a movie where a dozen French Arabs sit around and have an early Sunday dinner until you're seated at the table with them, listening to their stories, seeing them argue, watching them eat couscous and fish. But in "The Secret of the Grain," three minutes after that meal is underway I wanted someone to pass me a plate. Such is the hold Abdel Kech-iche's thrilling family drama has.

That dinner scene and its asides (the diaper talk is epic, too) last for what feels like a fifth of the movie, and the richness holds up for the rest of the film. "The Secret of the Grain" takes one man, his children, their spouses and babies, his ex-wife, his girlfriend, her daughter, and his friends and turns it all into a masterpiece about the strange power of food - to heal, unite, exasperate.

If Michael Bay produced million-dollar car chases the way Kechiche orchestrates dinner sequences, people in "Transformers" might eat better, for one thing. For another, they'd be far more enriched as movie characters. Kechiche's drama is a kind of action movie - many a work of realism is. When done as naturally as this one, an observational film about relationships and behavior can trigger organic explosions.

Set in the French resort town of Sète, the film sprawls across the entire Beiji clan, whose emotional center is Slimane (Habib Boufares), a shipbuilder unceremoniously sacked after 40 years. He's an artist in an industry too impatient for art, which is to say he could also be a filmmaker.

Rather than spend his days wilting in his hovel of an apartment - it's a room in the hotel his girlfriend, Latifa (Hatika Karaoui), runs - Slimane decides to open a restaurant on an old boat he's been given. The movie devotes another collection of scenes to the bureaucracy he encounters, dropping in on various officials hoping to catch a break for assorted permits and licenses. Having Latifa's sly, savvy teenage daughter, Rym (Hafsia Herzi) with him eases things. She does most of the explaining.

Kechiche is one of those uniquely gifted directors who can fill a movie with people who've never acted before or who don't act very often and extract from them the natural rhythms of human interaction - fire, joy, pathos. It probably helps that Kechiche, whose previous movie, "Games of Love and Chance," was an enchanting drama about teenage actors, is an actor himself.

The entire film is built around familial bonds and the tensions that arise when those bonds are strained. Slimane's kids don't like Rym. Well, the two girls obviously don't. The boys insult Latifa's hotel but watch Rym eat their mother's leftovers with understandable longing. Rarely has an actor put such un-self-conscious sex into eating a plate of couscous with her hands.

The Beiji saga quietly builds to the soft opening of Slimane's restaurant, which comprises the last portion of the movie. While the family starts serving and his musician buddies entertain, characters arrive and depart out of true urgency and personal melodrama. The diners are mostly VIPs: the local, white officials whom Slimane hopes to win over. Suddenly, amid everything else, Kechiche has thrown in some damning cultural critique. When one dinner guest - a woman who happens to be sleeping with Slimane's married older son - says something in Arabic, another bureaucrat exclaims, "How hip!" Meanwhile, the authenticity of Slimane's restaurant worries the local business owners he's invited: How can they compete with this?

At some point, things take a turn for the unexpected, and it's a bellydance (epic, of course) to the rescue. The image of the white faces in the restless crowd looking up at that undulating body captures the weird nature of certain kinds of spectatorship. The bellydance becomes a shrewd exotic distraction, as the formerly colonized seduce their colonizers. I thought about Danny Boyle's "Slumdog Millionaire" the second time I watched Kechiche's film. His ideas of ethnicity, enterprise, and exploitation openly acknowledge what bugged me about Boyle's film, a story trapped under a Western thumb.

This final sequence in "Secret of the Grain" is an astounding act of storytelling, in which the delicately constructed or seemingly throwaway details we've seen over the course of the film return, lifting the entire enterprise into tragicomedy. Watching one character prepare to cook an 11th-hour meal, I didn't know whether to laugh or cry, so I did both. It's a finale that makes you anticipate the horror, embarrassment, and recriminations of the morning after as much as you fear them. The final shot is a masterstroke that settles nothing. Kechiche doesn't just ascend a mountain; he jumps off a cliff and leaves you in a state of cognitive dissonance. Your heart is broken, but, amazingly, your pulse is through the roof.

It's all too much by half. And yet in so many ways, this is the feeling you want from all those Hollywood holiday fiasco films: the sense that you couldn't possibly watch another movie once this one is over. You're exhilarated - not by the idea of food per se, but by the fact that the filmmaker has exhausted all the possibilities of life.

THE SECRET OF THE GRAIN Directed by: Abdel Kechiche