Follow the money: A corrupt bank, killer fees, and plenty of stimulus in 'The International' 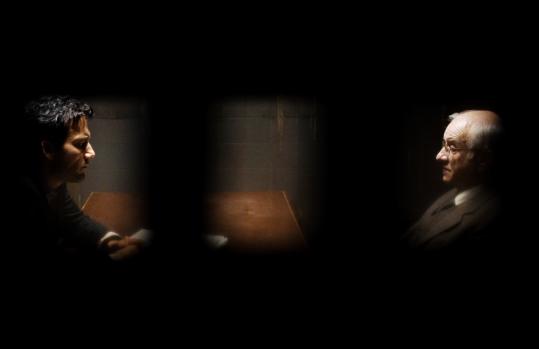 Two-thirds of the way into "The International" comes an action sequence so audacious, so supremely well crafted that I don't want to tell you anything more about it. I'll have to, in a bit, but if you want to retain a moviegoer's constitutional right to be surprised, just stop reading and go. I can promise you a fairly good thriller with mixed-bag elements: preposterous plot, smartly elegant direction, one of the worst recent performances by a major actress, and a dynamite stick of an action scene that can stand close to the greats (the car chase in "The French Connection," the single-take battle sequence in "Children of Men") and from which the movie never really recovers.

By the way, how up-to-the-nanosecond is "The International"? The bad guy is a bank. When the nefarious conspiracy behind all the hugger-mugger is finally laid out, a character says, "It's not about profit, it's about control. . . . This is the essence of banking, to make us slaves of debt." Finally, a villain we can all agree on. Audiences, loosen your shackles - you have nothing to lose but your credit rating.

Based loosely on the BCCI scandal of 1991, "The International" concerns a Luxembourg-based financial entity called the International Bank of Business and Credit, run by an unflappable Euro-smoothie named Skarssen (Ulrich Thomsen of "The Celebration"). The IBBC is the favored lender of African warlords and Chinese small-arms merchants, and our heroes - a manly Interpol agent (ex-Scotland Yard) named Louis Salinger (Clive Owen, who has yet to crack a smile on film and good for him) and Ellie Whitman (Naomi Watts) of the Manhattan DA's office - want to bring the bank down. She's the good cop, he's the bad cop, and the movie knows better than to gin up a romance between these two.

In general, the movie knows better, period. The genre is the high-stakes globe-hopping thriller as most recently purveyed by the "Bourne" movies, but director Tom Tykwer is confident enough to go his own way. There are datelines and foreign capitals (full of foreign capital), but not for this filmmaker the handheld jiggery-pokery of "Bourne" director Paul Greengrass or even of Tykwer's own breakthrough, 1998's "Run, Lola, Run." "The International" is less ambitious but more successful than Tykwer's last movie, "Perfume" (2006); it's little more than a potboiler, but it makes you realize how rare it is these days to be in the hands of a natural-born moviemaker.

For instance: Early on, Salinger and Whitman have traced the money trail to an Italian arms manufacturer who's running for prime minister (Luca Giorgio Barbareschi), and he promises to tell them everything right after he's delivered a campaign speech in a public square. We all know what's going to happen, but the shock lies in how it happens, and the pleasure is in the cleanly photographed, crisply edited shot language, keeping us one step ahead of the heroes and two behind Eric Warren Singer's script.

Here's another: Salinger has chased an IBBC hit man in and out of alleys, and at a certain point he's on foot and the villain is in a car. The hero rounds a corner to find . . . a traffic jam of identical black automobiles. It's not a new idea but Tykwer and his cinematographer, Frank Griebe, frame it so it's newly seen, and I suddenly realized where the film was going: It's the umbrella scene from Hitchcock's "Foreign Correspondent" with a double shot of corporate paranoia.

That hit man, by the way, is one of the best things in the movie, a spook played with eerily capable blandness by the Irish actor Brian F. O'Byrne. His character has the sort of anonymous, uninflected face you wouldn't notice in a subway car, and that's his armor: He's a lethal nonentity. "The International" sets him and Salinger on a collision course - Whitman and a variety of foreign and New York City cops get involved, but for the longest time the movie's dance is between these two. When they finally cross paths, Tykwer shifts gears and suddenly we're in an unexpected and better movie.

That would be the action scene I mentioned earlier - last chance to stop reading - and, again, there's a jolt of Hitchcock in the use of a well-known landmark for movie mayhem. Salinger has followed his quarry to Manhattan's Guggenheim Museum, where a major showdown ensues, and the sequence is an absolute kick in its use of architectural and cinematic space. The people we're rooting for have to get all the way down the Guggenheim's famous spiral ramp with heavy ordnance coming at them from all directions.

The scene keeps thrillingly one-upping itself, yet it plays with a realism you don't see in, say, a "Die Hard" movie. Museum patrons scatter and blubber believably; the stunt-Guggenheim takes a beating; later, the incident is all over the news, as it would and should be. What makes the sequence even more satisfying is that the action has narrative twists threading through it, with allegiances shifting and alliances forged under heavy fire.

After that? "The International" gets back to the business at hand, though its energy is spent and the holes in the byzantine plot keep stretching wider. We're treated to a good and weary performance by Armin Mueller-Stahl, for once not playing the avuncular villain but the villain's avuncular advisor, and we're forced to wonder why Watts, an extremely skilled player in the right circumstances, can't deliver action-movie dialogue without sounding like a third-rate TV actress. I guess it's not in her skill set.

Big, twisty, fundamentally empty Euro-thrillers are in Tom Tykwer's skill set, surprisingly - who knew? The director has struggled to find the right projects in the decade since "Run, Lola, Run," but "The International" is a reminder that his gifts are many and prodigious. We'll be hearing from him again. You can bank on it.